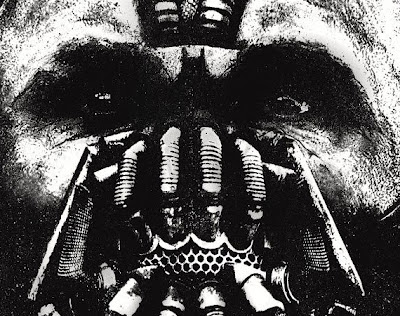 Let's just get right to it.
At the end of the Dark Knight, Batman takes the fall for Harvey Dent's murder. Harvey's third act villainy is covered up to protect his image and Commissioner Gordon's job and Batman is blamed for Dent's deeds. Then he disappears.
Now, in Rises, Gotham is quiet and Bruce Wayne has gone into hiding, confining himself to his modest little house in the sticks. Rumors circulate that he's become a modern day Howard Hughes: six inch fingernails and mason jars filled with bodily fluids and hideous scars. This is first of at least three times during Rises (the other two I can't talk about without divulging massive spoilers), where the movie had me wondering how in the hell people haven't put two and two together with this whole Bruce Wayne/Batman thing. I mean for God's sake, they disappear at the same time, they reemerge at the same time, Batman's got an endless supply of gadgets only a billionaire could afford, Bruce Wayne leaves Gotham for seven years and when he returns...Batman shows up. In a film that takes place during the modern age, people as famous and talked about as Bruce Wayne, in a city as big as Gotham, have no secrets unless they're much better buried than Wayne's is. If Justin Bieber can't fart without it being headline news, the cowl can't conceal Bruce Wayne.
Man of Steel, the Chris Nolan produced Superman reboot comes out next summer. Will I be as hard on Metropolis for not figuring out what Clark Kent is up to when he takes his glasses off? That is ridiculous, but no probably not. And I didn't ask Gwen Stacy if she was for real when she didn't recognize Peter Parker's voice as the Amazing Spiderman. But these are superhero movies that take place in a comic book mentality universe. Nolan's made quite clear, in the stories he's chosen to tell, and the characters he's chosen to populate them, that his bad guys and his vigilante wheel and deal in reality. Close to it anyway. I've always said and stick by it, that Nolan's Batman's are not superhero movies because no one in them has super powers. Bane is a very strong guy but his strength isn't superhuman. And Joker's thirst for chaos is nothing more than a deep seated derangement. Batman himself has only ever been his wallet and his brain. These movies are terrorist crime films. More colorful than something set in Iraq featuring the American military, but that's all they are. And in doing them this way, Nolan is asking we hold them to a higher standard than we would a movie where a teenage kid starts shitting spider webs. One example of this higher standard is the villains.

I personally have loved all three main villains in the Dark Knight trilogy. Scarecrow was a great mix of mad scientist and brain screw. Joker is obviously the greatest and probably most iconic villain in comic book and movie history, and Bane is a perfect choice for the final installment as he is easily Batman's most challenging foe. There's a sequence halfway through the movie where Bane and Batman throw down and Batman literally gets thrown around like a rag doll, with every punch and smack sent Bane's way barely fazing him.  It sucks the heroics out of Batman with a straw and makes him very human.
The castings of the villains were all great as well. Cillian Murphy was perfect, Heath Ledger's performance and its ensuing accolades speak for itself and Tom Hardy seems born for this role. It's hard to believe scheduling issues almost prevented him from taking it. His physical presence is daunting. He exudes the menace, power and indifference for human life his character possesses. Most people seem to have had a love it or hate it reaction to Bane's voice, starting with people complaining that in the IMAX prologue Nolan was showing last year, Bane's dialogue was muffled and quiet and nearly inaudible. Well, the filmmakers took these concerns to heart and what you have now is an overcompensation in the mix which results in Bane's voice being several decibels higher than anyone else's. Even with the apparatus on his chops, this doesn't make a whole lot of sense and takes you out of the movie a bit every time the big man has something to say. His odd mix of Old English and Romanian accents and verbal patterns are also hard to get used to. Tom Hardy has said this was an intentional decision meant to disorient the audience and give Bane an otherworldly aspect. Again, you'll either love it or hate it, but there's no denying Hardy's magnificent and original performance throughout.
On the topic of performance, much has been made of Anne Hathaway's Selina Kyle stealing the show. I don't know if I would say this myself but she's very very good. The filmmakers have wisely refrained from referring to her as 'catwoman' and thank God for it, it takes a great deal of cheese out of her and makes her much more grounded in reality. In fact, the only time Kyle resembles a cat is when the goggles she uses to crack safes are perched on her head, coincidentally resembling cat ears. A clever touch.
For me the show stealer here is Michael Caine as loveable, ever trustworthy Alfred. He doesn't have quite as much to do here and he did in Dark Knight and his character is missing from a big swath of the movie, but what he is given are the most emotionally demanding scenes and he knocks them out of the park. There's one scene in particular that just about destroyed me emotionally and had me close to blubbering. He also features in a key scene at the end which has definitely gotten the most discussion and debate since the movie came out.
Rises is chock full of a huge cast of characters, all of them played by very accomplished legends and established and up and coming superstars alike, all of them making this one of the best acted films of the year. Even when the characters are given things to do which don't entirely make sense.

Depending on how forgiving a filmgoer you are, Nolan's Batman films ask a lot of you in regards to some of the finer plot points in their stories. Points here meaning holes. Or how the cops are all morons and say 60's cop show cheesy things, or how Batman always seems to know every place every person he happens to need at that particular time is going to be. As these tidbits add up, it gets harder and harder to resist them taking you out of the story.
But Nolan balances this by filling the screen with as much spectacle as its borders can contain. Just in terms of scale, Rises is a much bigger movie than Dark Knight or Begins. It's hard to tell these days what's organic and what's CGI but from what I've read, Nolan made a healthy amount of rubble fly filming this. There are some awe striking set pieces and the first appearance Batman makes in Rises, as well as the first appearance of his new plane 'The Bat' are awesome enough to induce heavy goosebumping.

By far the element of this movie I've struggled the most with is its ending. Obviously I can't, and won't, say a damn thing about it except to say it is a mystery to me. It's something I've gone back and forth on how I feel and what I think about it. And I don't know that I'll ever have my thoughts sorted one way or the other. I doubt this was an unintentional reaction on Nolan's part (the man behind the spinning top).

The Dark Knight Rises is a film I would recommend to anyone in a heartbeat. It's got some great acting, great characters. It might not have anything that rivals the opening bank heist in Dark Knight (which is one of the greatest movie openings of all time), but it has a whole bushell of larger than life set pieces and seamless CGI to make the special effects seem as real as Alfred's wrinkled kisser. It also provides an appropriately formidable foe in Bane for Batman to get his ass constantly kicked by and the most emotional moments of the whole series. There are also plenty of fun winks and nods to the last two films, especially Begins.
The series of plot holes and overly convienient coincidences hurt things a bit, the sound mix is terrible (Bane's too loud, the soundtrack's too loud, other characters are too quiet), and that ending could be one of the best, or one of the worst endings of all time. But one thing in all of this is for sure: you will be thinking about this movie long after your stomach's stopped hurting from the popcorn you just ate.