There's an interesting dichotomy that exists in arts and entertainment. Something which isn't necessarily debatable and even stands in harmony with itself, but which is also at odds with its immediately definable personality.  What I'm referring to is the existence (or co-existance) of the complex and the simplistic. No one who is in any way familiar with the work of Mozart or Beethoven would tell you these artists' works are not complex, challenging and impressive. Especially when considering that Beethoven was deaf and (if the film Amadeus is to be believed) Mozart flouted the very establishment he excelled at impressing.
The same to can be said for filmmakers such as Orson Welles and Stanley Kubrick, whose perfectionist driven films hold more secrets and complexities in their nooks and crannies than we will ever fully expose or understand.
But for every Jimi Hendrix or Eddie Van Halen, mastering six strings and distortion petals like they were an extention of their very limbs, there are the John Lennon's and the Johnny Ramone's. Stripping music to its very core and creating enduring classics with the barest essentials. For every Fredrico Fellini, Akira Kurosawa or Christopher Nolan, there is a Steven Spielberg. Making popular entertainment that reaches a wide audience because the filmmaker has the insight and the understanding that the audience doesn't like to be left behind.
Jaws is well made, popular entertainment that works best because of how simple it really is.

Not all of Jaws' simplicity was preconceived. Jaws' making of story is one of the most famous of all film tales. I'm sure there's hardly a person alive who has even minimal knowledge of Jaws and hasn't heard of the trials and tribulations the filmmaking crew suffered at the hands (fins) of the infamous mechanical shark who, for most of the production, refused to work properly. And how this forced Spielberg & Co. to come up with more creative and subtle ways of expressing the terror underwater, undoubtably birthing a far more frightening and effective flick as a result. After all, as any who is familiar with the torture scene in Tarantino's Reservoir Dogs can attest, it's often what you don't see that has the greatest effect.

So, the shark's not working. Have to simplify. Swim the camera through the reeds and push in on some unsuspecting legs and with some talented acting skills and some blood packets, maybe a fin attached to some 2x4's, we've got our shark.
Aside from the power of suggestion, the faulty shark was a blessing in disguise in another key way that may have hurt Jaws' global domination potential otherwise: the couple of times we do see the shark, particularly towards the end of the film, it looks ridiculous. Silly looking jowls where the hinges that make the mouth move are poorly hidden, very mechanical looking, jerky left to right movements, and a stiff body make this $250,000 clunker the poorest special effect in Spielberg's career. Granted, these were the days before CGI and the abilities on the part of the effects team to duplicate reality was limited, but this was also less than five years before Star Wars and seven years after Kubrick's 2001. So they can't completely be let off the hook, pun intended.

Arguably the most effective element of Jaws is the music. You sometimes don't realize until you see a movie like Jaws the power that music has on film to inform you of what you're to be feeling at any given moment. The 'Jaws theme' is not only one most recognizable pieces of music in movie history but also one of the simplest. Spielberg tells a tale in Laurent Bouzereau's amazing documentary The Making of Jaws, that when John Williams first played for him the simple two note crescendo, he thought he was joking. It was just too simple. Too minimal. But Williams held fast and, especially in the absence of the shark itself, the theme became the films cue for anxiety and an omen for terror.
A more effective example of the marriage of music and image would be hard to give. 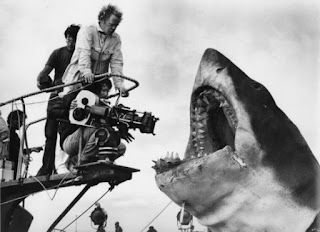 So we've got our shark (or our suggestion of one) and the music to go with it, what about the brave souls that will hunt the toothy beast and put an end to its carnage? Or the poor unfortunate souls that will fill its slow digesting belly? Along with his vision and understanding of what people want to see, Spielberg is fairly renowned for his casting choices. I can't think of a single film he's done where I would say this part or that was miscast. Where I would say that a performance was lacking. Jaws is no exception.
Before he wowed us all with Opus' and building mountains out of mashed potatoes, Richard Dreyfuss was best known in 1974 as Curt from American Graffiti. Dreyfuss would go on to star in a number of Spielberg's earlier films, as well as a host of other high profile and independent pictures, proving himself, in my humble opinion, as one of the better actors of his generation who has been sorely missed and underused the last couple decades (he mostly does TV now). But in '74 he was just taking off and his role as shark expert Hooper is one of his more memorable performances. Cocky, kooky, hyper, driven, Hooper is a firecracker in the movie and, via Dreyfuss, is my favourite character and performance in the film. In the novel and early drafts of the script, Hooper has an affair with police chief Brody's wife, something Spielberg and his writers had the good sense not to include, as it would've pretty effectively killed any goodwill the audience held for Hooper and added unnecessary melodrama to what works best as a simple story about a shark.
Roy Schneider plays Brody. Geeky, antsy, a little neurotic, a big city boy who knows little of life on the water and in fact even has a small phobia of it. Schneider of course was a well established star when he made Jaws, having just come fresh off an Academy Award nomination for The French Connection. He's great as Brody, and provides a nice contrast to Dreyfuss' enthusiasm and Robert Shaw's craziness.
Both Dreyfuss and Schneider have said that working with the great Robert Shaw was both exhilarating and almost unbearably difficult. A man of intimidating intensity, Shaw is responsible for delivering one of the most memorable and famous movie monologues in all of film with the U.S.S. Indianapolis speech. A true story that is more frightening and disturbing than anything the rest of the film has to offer. Shaw's character Quint, a man who lives to hunt and slay sharks, is a cartoon character of a man who is in part a patchwork of some colourful island locals Spielberg came across in Martha's Vineyard, where the movie was made. He's an intense brute, stubborn and gleeful in his pursuit of the great white menace. Robert Shaw plays him to perfection. 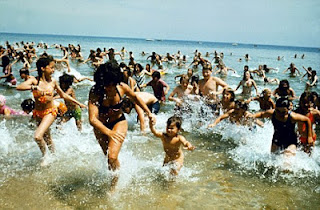 The Jaws script passed through many hands before the cameras rolled. The production experienced obesity as the shoot went from a few million and fifty-five days to tens of millions and a hundred and fifty-five (or so) days. Jaws was the first film to shoot on the actual ocean and one of the last, as the production team quickly realized that things like weather, waves, tide and passing boats don't really give a crap if you're trying to make a movie or how much it costs. The strain was such that Spielberg experienced some serious panic attacks and recently said he still has nightmares in which he is back on day three of production, with a hundred and fifty more days of hell to go. Still, Jaws made his career. It enabled him to go on and be the single most powerful and profitable director ever and it provided popular culture of every era since an almost endless amount of quotable and hummable cannon fodder.
Jaws was the biggest moneymaker of all time (until Star Wars came along and put a shiny lightsaber right up that shark's...snout). It's not hard to see why: The simple but effective story, the iconic music, the great performances, the witty dialogue, that opening, that speech, Spielberg's inventive, assured camerawork, the shark showdown, the final shot. I'd have been screaming and cheering if I was around when the movie came out too.
So smile, you son of a bitch. For Jaws has lost none of its bite.