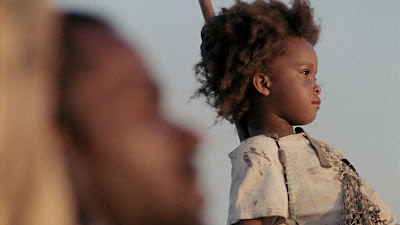 Beasts of the Southern Wild is an indie film that is in English, takes place in America, but really could be described accurately as a domestic foreign film. The location of the film, a small island just off the coast of New Orleans affectionately known as 'the Bathtub' is, for America, an otherworldly place. The movie is set in the wake of hurricane Katrina, and the Bathtub is in absolute shambles. Homes have been decimated and their remnants strewn far and wide, reducing the area to bits and pieces of lives once known and comforts lost. The Bathtub, as we find it, is more or less a post apocalyptic wasteland. It isn't said how many people once populated the small area, but it is understood that most of them have fled, leaving us with a small and close nit cast of characters who are a few of the hurricane holdouts that refused to abandon their home, no matter how desperate things look or how savagely the storm consumed their way of life.
It is in this first world/third world scene setting that we are introduced to Hush Puppy, the nine or ten-ish year old girl who will be our narrator and through whose eyes the film will take place. Hush Puppy lives with her father, eking out a shanty town existence, where their house is made of the scraps of other houses and they eat wild chickens, catch fish with bare hands and skim the waters for shrimps, crabs and other local seafood. Actually, aside from the cleanliness, they eat quite well in this film. Hush Puppy's father drinks heavily, is sick with something, though we don't know what till the end of the film and is quite hard on his only daughter. So hard in fact, you initially feel he's a bit of a jerk and feel bad for Hush having to rely on such a man. But as the film unfolds you realize her father is hard on her because he loves her, because he knows he won't be around forever to look out for her and he wants her to be strong enough to look out for herself if anything should happen to him. This poses an interesting topic
of thought and discussion, as most children need a certain amount of love and affection to function healthily. But most children (in privileged countries) don't find themselves in the situation Hush Puppy is in, where the goal of every day is to survive it.
The narrative style of the film is often surreal and even purposely oblique. But we are seeing the story unfold through Hush's eyes and childhood itself is surreal. It often feels like a dream and the innocence and simplicity it provides in living in ignorance of things like mortality and financial responsibility, is in stark contrast to what adulthood ultimately provides. That's not to say all childhoods are dream-like and death free, or that all adulthoods are troublesome, but the forays into Hush Puppy's imagination, something some who've seen the film were turned off by, are not only understandable, but necessary. No child's mind, regardless of upbringing, is free of imagination. It is essential and something we are all born with and retain, even in the face of circumstance or individuals who would try to rub it out.
Another aspect of realism the film conveys is visually. The movie looks and feels real. There's a naturalistic quality to handheld filmmaking, if done right, that the filmmakers here understand and exhibit.
Dwight Henry, who plays Hush Puppy's father, isn't always the most convincing actor, but he is overtly naturalistic, if that makes sense.  And Quvenzhané Wallis is a revelation as Hush, carrying the whole film on her shoulders like she's done it a million times. I have a growing list of favorite actors, all of them well known celebrities, who I love to see on screen again and again. But there is something special and of course much more real about watching a film well played by a cast of unknowns.

Beasts of the Southern Wild has a duality about it in that it is both uplifting and hard to watch. On the one hand, it is at its core a film about the triumph of the human spirit. About love and sacrifice and never giving up. On the other it is a sad story of poverty, ruin, loss and the colossally poor handling of the areas affected by hurricane Katrina by the U.S. government.
The filmmaking feels real and even improvised at times, without feeling incondite. And the acting is naturalistic and in Wallis' case, superb.
The narrative style is deliberate and consistent in the way it represents the world through a child's eyes, and at times requires the patience children often require.
It's not film I could watch again and again, but I heartily recommend it to anyone looking for something unique and beautiful this year.