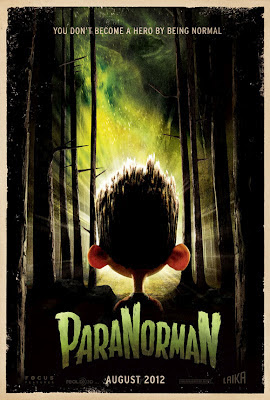 Paranorman is Frankenstein's monster via stop motion animation's Victor Frankenstein.
That is, it is a movie made up entirely of other movies. Entirely. Stitching bits and patches of horror's predecessors together to form Paranorman's head and body. And sewing on previous stop motion character types for the arms and legs might seem an overtly plagiaristic endeavour, but the great charm and success of Paranorman is that the hat tipping happens to works wonders.

Paranorman features a boy named Norman. Nothing shocking there. Norman is that unfortunate for him but fortunate for the story horror movie stereotypical misunderstood child. He's different. Misunderstood by his parents, shunned by (most of) his classmates, obsessed with scary movies, ghouls and the things that go bump in the night. He's seen as little more than a weirdo. But it's not solely his passion for goosebumps that sets him apart. It's his innate ability to see and communicate with...the dead (The Sixth Sense).
He sees dead people. Watches movies with his deceased grandmother. Bids good morn and adieu to a variety of wispy transparencies as he goes about his day. Added to Norman's predicament is the fact that he lives in Blithe Hollow, a town upon which is held a centuries old curse by a vengeful witch (The Blair Witch Project). As the town's 300 year anniversary looms ever closer, a sense of increasing paranormal activity is in the air and Norman, armed with clues left by a crazy homeless uncle and a group of ragtags (Scooby Doo, Monster House), must save his town when the undead are unleashed (Night of the Living Dead, too many zombie movies to name). From here it would spoil too much to reveal how and why but heavy winking and nodding to the likes of Frankenstein, Carrie, The Ring and more guide Norman in his adventure.

Paranorman looks amazing. I love stop motion animation and this might be the best looking stop motion film I've seen. The colours are gorgeous in Halloween oranges and blacks and zombie greens and reds. The sets and the characters are crafted with endless detail and the dashes and slashes of 2D animation are seamless. It's funny and says something about Norman's world that the human characters are often more odd and otherworldly looking than the undead ones. And the sharp, exaggerated angles and shadows in the movie directly reference the 1930's work of horror pioneer James Whale. I didn't see the movie in 3D, but didn't need to, the 2D version was sufficiently impressive without the headache and double vision. 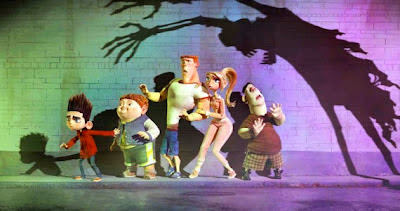 Another of the film's great strengths is its voice cast. Casey Affleck, John Goodman, Anna Kendrick, Christopher Mintz-Plasse, Leslie Mann and Jeff Garlin round out one hell of an impressive team of supporting players, while Kodi Smit-McPhee is just perfect as Norman.
I took my eight and my four year old to Paranorman and they both loved it. I also took my 50 year old father and 22 year old sister and they loved it too. It's funny, it's great to look at, it's legitimately scary. It's story is simple without dipping its toe into Brave territory, and its characters are easily identifiable stereotypes, which means familiarity recognition and kids, unlike critics,  love that kind of stuff.
It would be too easy and too obvious to compare Paranorman to any number of Tim Burton films, though it shares DNA with many of them, and only slightly amiss to sum it up as Wallace & Gromit meets The Nightmare Before Christmas.
Although it has nary an original bone in its bag full of them, Paranorman is everything it sets out to be: Frankenstein's monster, using what was to create what is, with spookily exciting results.