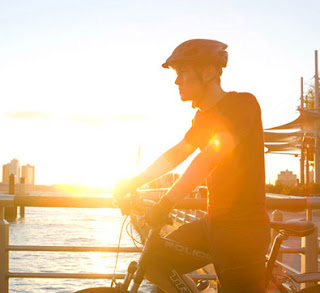 New York City locals would tell you you'd have to be crazy to own a car in Manhattan. And yet many many people do, as is evident by the perennial traffic jam that clogs the mighty core of the eastern seaboard. Every television show, every movie, every shot outside the buildings where Saturday Night Live, the Late Show and Live! with Kelly show the bumper to bumper cluster funk that are the streets of New York. In Manhattan you could probably walk across town faster than drive. So what better place for an intercity delivery system that uses fit young souls on bikes to get your package to where it needs to go?
And this world is the backdrop of Premium Rush. We're introduced to Wilee, a bike courier who zips through town on a bike with no gears, no brakes and a beat up chrome frame. Wilee loves to ride. Loves it. So much so that he would rather be said bike courier than finish his schooling by taking the bar, becoming a lawyer and making in minutes what it probably takes him an entire week to earn on his bike. He's also got a girlfriend (ex) who works for the same company he does, who we learn has left him because he kept putting his job before her. His job delivering packages on a bike. Putting it above a beautiful, smart, fun girl. He really likes to ride.
He gets into trouble when he's given an envelope to deliver that has something in it that will get a crooked cop out of trouble with some gambling debts he's piled up, but that belongs to a woman who needs it for her own desperate purposes.

In all honesty the story's pretty weak. In some ways its so broad its almost comedic when it isn't meant to be (one example is Wilee's ability to see a number of different outcomes in the path he chooses when he is confronted with a situation that may result in his getting in an accident. Visually it's pretty neat, but it's also very cheesy and unrealistic), in other ways its overly complicated, with the cop's story poorly told and fairly muddled. There's a big plot point revelation halfway through which exists to pull heartstrings, and does, but also feels somewhat obvious and will be overly sentimental for some. Finally there's a sequence which involves the bike courier version of a flash mob which is meant to be inspiring and exciting but which instead manages to be what is probably the new film encyclopedia definition of anticlimactic.

But this movie is not about the story. It's not about the subpar acting (Joseph Gordon-Levitt was miscast, I hate to say, and Michael Shannon as the crooked cop is hammy. The rest of the cast is competent but forgettable), it's about New York and about the biking.
Premium Rush is a great New York movie. As someone who has never been to New York, and as someone who doesn't like crowds or high crime areas, it's great when the movies can give me a good sense of the city without my having to buck up to the aforementioned concerns. Premium Rush gives you a really good sense of the city. Following Wilee and his coworkers as they whip through traffic, up major boulevards and down tightened alleyways, the megatropolis becomes not just a location, but an important character.
CGI has gotten to a pretty advanced stage by this point. It can be hard to tell whats organic from whats not, but I'd bet a fresh chocolate sundae that all the biking and bike related stunt work in this film was completely real and that's by far the film's most impressive aspect. I'm not sure how much stunt work Godon-Levitt did himself and there were at least two instances where I could see a stuntman in Joseph's place. But the speed and the danger of this very real and very dangerous New York profession were expertly conveyed throughout. I would have loved to have seen this movie shooting: the camera crew speeding through New York filming these bicyclers. It would've been quite a sight.

Premium Rush overall is a film I would recommend first and foremost to bike lovers. Anyone with any passion whatsoever for biking should see this on the biggest screen you can. Secondly I would recommend it to people who like fast paced stories with lots of action (bike action, there isn't much gunplay here) and who aren't put off by mediocre acting and a silly plot. Lastly I would recommend it to lovers of New York City and Manhattan in particular, which the film makes look like a very cool, albiet busy, place to be.
The same cannot be said for the NYPD, as respresented by this film. It wouldn't surprise me if Premium Rush angered members of New York's police force, as the movie makes them look like incompetant buffoons. I won't say why but a large number of them spend the movie trying and failing to catch a kid on a bike, being outsmarted and outridden at every turn. Give me a break. A force as powerful and large as the NYPD can't catch one kid on a bike? That's a little embarrassing.