"We're cops, everybody wants to kill us" 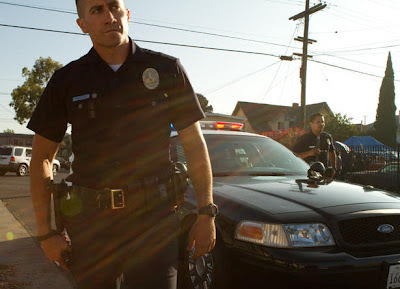 Every city has its nicer areas and its areas to avoid. The city I live in is split down the middle by a river, with the North side generally being the run down, higher crime area and the South the newer, nicer one. When I was in Chicago there were tourist 'what there is to do' pamphlets that told visitors to stay out of the South side of Chicago altogether for your own safety. Harlem in New York City has also always been pretty notorious for its rough interior. But probably the most famous bad area in the entire U.S., in life and in entertainment, is South Central Los Angeles, otherwise affectionately known as 'The Jungle.' There has been no shortage of grim representation of this run down, crime ridden Southern Californian ghetto. As well as being forever in the history books as the kick off point for the L.A. Riots, it has also featured in television shows like The Shield, video games like Grand Theft Auto IV and many, many movies, with some notable ones being Boyz N' The Hood, last year's Rampart, and 2006's Training Day, written by End of Watch writer/director David Ayer.
Ayer has spent most of his Hollywood career writing and occasionally directing gritty crime films set in South Central. Growing up in the area has given him an insight Hollywood hound dogs from outside the area don't have. And while nearly all of his films have been met with mixed enthusiasms, there's no denying the authenticity his knowledge of the area brings to the stories he tells.
It is this authentic realism that is End of Watch's greatest and most effective asset.
The film was shot on location and features actors and locals alike portraying stereotypes and characters we've all seen before in other films, but the difference in End of Watch is the language. I don't know how much of the dialogue in this movie was scripted and how much was improvised, but every word from every mouth feels authentic. This is especially true of the characters Jake Gyllenhaal and Michael Pena portray; partners and LAPD South Central watchmen. The easy back and forth and strong bonded relationship between the two, as well as their attitudes and the way they handle the crime scenes they find themselves stumbling upon is enough to make you forget you're watching movie stars. It's also this realism that makes the film hard to watch.
If you see End of Watch in the theatres, chances are at the same multiplex Dredd 3D will also be showing. Dredd 3D is more violent than End of Watch (though less grisly) but is in that regard much easier to swallow than this film. The difference being that Dredd 3D's violence is cartoonish, over the top, science fiction violence, even beautiful in its way. End of Watch's violence is grim, realistic, and occurs in a city, on a beat that actually exists. It concerns men that are actually out there serving and protecting this beat, dealing with the disturbing realities of disturbed individuals and the things they are capable of from day to day. I wouldn't say the events in End of Watch are unwatchable themselves, but there are images in this film that can turn the stomach and will likely stay with you for some time.
Another way Ayer conveyed this realism was to shoot everything on low definition, handheld cameras.

The biggest stumbling points of the film for me were these:

#1: The film starts off as a found footage story. All the things we're seeing occur through lenses that exist within the world of the narrative. The cameras on police cruisers, little eyehole cameras attached to the main characters' shirts and a handheld camera Gyllenhaal's character carries around with him to document what it's like being a police officer in South Central L.A., for a film class he's taking in school. That's all well and good and is a cool way to show a movie like this. Though be warned, when the shit hits the fan for these two throughout the film, the shaking chaotic camera movements will be too much for some. The problem with this found footage angle is that the director abandons it part of the way through, showing us footage that is still handheld, but is filmed by cameras outside the narrative. I think that's silly. With some craftiness and know-how they could have shown this whole film as a found footage movie and been just as effective.
#2: These two cops get in a lot of crap in the course of this movie. Literally every call they go on turns into a shoot out, a huge guns or drugs bust, a grim murder scene discovery, or some other horrible thing. I don't know (thank God) what it's like to be a cop in South Central L.A., but I find it hard to swallow these guys go through this much in the period of time in which the movie takes place. It would've been more realistic to see them field a few nothing calls in between all the mayhem.

That being said, those things really don't hurt the overall film all that much and what you're left with is till a tightly made, expertly acted and written film about a couple cops who find themselves on the wrong side of the notorious and terrifying Mexican Cartel. It's not easy to watch, but it's intense in a way few films are these days and is easily David Ayer's greatest accomplishment since Training Day.