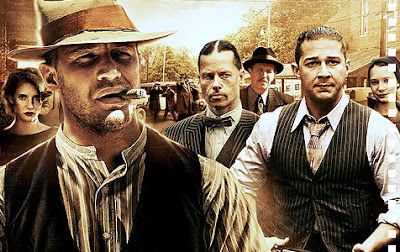 Prohibition kicked off on January 19, 1919. Spearheaded by right wing Christian fundamentalists and family focus groups, it was to this day probably the most unfavored and ignored law in American history. Something like 86% of the drinking age American population regularly imbibed in some form of alcohol during the 13 years the law was in effect. Prohibiting the country from having a drink or three, though done with the right intentions, was a pointless cause and gave rise to criminal activity that was many times greater than it would've been without. One of the great backfires this included was the newfound sympathy and even reverence for organized criminals and their organizations, who were now in many cases seen as heroes to the hard worked everyman who wanted nothing more than to unwind after a hard day with a cold beer. The gangsters provided the working man his respite in a time when it was needed most (prohibition ran alongside the stock market crash and the beginning years of the great depression). So now these gangsters, previously seen as something to be avoided and regarded with disdain, became the men of the people. Some of the more charismatic among them (Al Capone) even became media sensations, despite the fact that most, if not all of them, were at best thieves and at worst murderous sociopaths.
The Bondurant brothers of Virginia were an example of this seizing of the criminally minded to use a highly unsupported law to make a fortune for themselves.
In the film it's mentioned that Virginia was known during prohibition as the wettest country in the world on account of all the moonshining happening in its hills. No one, citizens and law enforcement alike, seemed to mind the bootlegging going on in their backyards, or if they did mind they knew better than to try to make trouble. In essence, every crooked, unlawful man or woman with a modicum of disreputable taste was in favor of making a lot of money from the illegal sale of alcohol.
But not every citizen could be roped in to knocking one back and not every lawman could be paid to look the other way.
Charlie Rakes, a special agent cop from Chicago, would've been known at the time as a dandy. Dandy's were in essence what we would now call metrosexuals.
Rakes wore perfume, he dressed in much fancier clothes than the occasions he found himself in would often call for, he slicked his hair back into a greasy part with heavy duty hair product and couldn't stand to be touched or made dirty. He was also antisocial, unfriendly and antagonistic. He was a man of violence, at times brutally so. Not easily intimidated, he would go to war with men who opposed him, as the Bondurants did in Virginia during prohibition. Whether this Rakes character actually existed, as the Bondurants did, and whether he was the dandy Guy Pearce expertly and bravely plays in the film I am unsure of. What I do know is that the film version of Rakes is a much more frightening character than any of the outlaw ones are. But that's not to say it would be any picnic being unfriended by the character Tom Hardy plays.
Hardy is the eldest Bondurant bro, a massive, frightening, mother hen type character who protects his nest, so to speak, with sudden, intense, at times necessary violence. It's with this man the films most violent scenes occur. Hardy's portrayal here could be seen in some ways as an extension of his Bane performance. Big, thick, menacing (much more quietly so here than in Rises), commanding the stage he encompasses without being greedy. It's just the nature of his performance. He grunts and harrumphs and uses his eyes more than his words to express emotion. Which in some ways is good because, let me tell you, if you were bothered by not being able to understand him as Bane, you will be pulling your hair out here as his words often come out in slurs slipping and sliding over marbles. It's reasons like this that I look forward to the blu-ray release so I can watch the film again with subtitles. It's one hell of a performance overall, and Hardy is becoming one of the better actors of the current generation.
But if Hardy is quietly menacing without hogging the camera, Shia LaBeouf is an outgoing three year old. A ball of energy, going full intensity freight train, even in his quiet scenes, and filling the camera with this energy, rather than his frame. LaBeouf is a great actor and well suited to roles that require this level of energy, as most of the roles he takes do. I'm not about to offer commentary on his personal life, because I don't care about his personal life, but watching him you get the sense his characters don't always end with 'cut.'
The third Bondurant (the middle one in age) is played by Jason Clarke, who I must admit I don't know much about. But his IMDb profile says he has played a number of bit parts in some major films and done a great deal of television in shows I've never seen. But he's good in Lawless. He plays a violent drunkard whose character, as Clarke himself, has the misfortune of being sandwiched in between two actors and characters that don't leave much acting room for other people who are on the screen when they are.
Jessica Chastaine, Gary Oldman and Mia Wasikowska round out the juicier roles with great skill that, again, shines brighter when not on the screen with Hardy or LaBeouf.

Sometimes you sense you can get an idea of a man by the kind of movie he makes. Scorsese is a man who has a thing for religion, Catholicism in particular, and a great understanding of the history of cinema. Tarantino loves old school exploitation flicks. Those two are easy. Spielberg seems like he might be a bit of a people pleaser. Christopher Nolan seems like he might be a bit of genius. Lars von Trier seems like he might be a bit of a maniac. Clint Eastwood just doesn't dick around. And John Hillcoat, director of this fine film and many others, seems like a man who pulls no punches and rarely apologizes for offences made (intentional or not). His films are gritty, disturbing, and hard. Ghosts of the Civil Dead, the brilliant The Proposition, The Road, and Lawless are all very violent, very dour films about desperate people in desperate circumstances. With the help of his (professional) second half, songster and scribe Nick Cave, he has been crafting himself one of the more impressive bodies of work by a living director. His style is effective without being flashy, he knows where to put the camera without making the camera's presence readily apparent. He's a damn fine filmmaker and I can't wait to see what he does next.

Lawless had a long, hard road to the big screen. Although I'm sure it will do well, there just isn't big money in prohibition era bootlegger flicks right now. Or indeed any film that isn't a sequel, comic book adaptation, talking animal family fare or Justin Bieber documentary. But they got it paid for, got it made, and for those of us who like this sort of hard hitting gangster story, have created one of the best films of the year.
Please sir, can I have some more?