Where the drama is 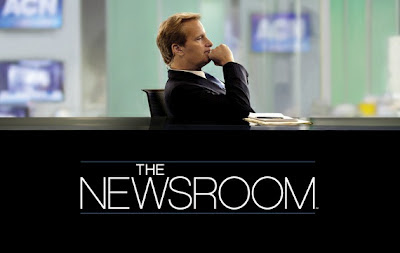 There's maybe nothing more indicative of good entertainment than how smoothly it goes down. As far as movies and television are concerned, this relates to timeframes. A poor ninety minute movie, for example, can feel like a four hour exercise in endurance. While a really good two and a half hour movie can zip by in what feels like twenty minutes. HBO understands this better than anyone in the TV business and taps into its potential by creating shows sprinkled with crack and hooking viewers on their first hit, causing widespread Sopranos, Deadwood or Six Feet Under marathons where people, not always willingly, allow all their earthly responsibilities to go to pot in an effort to watch 'just one more' episode to see what happens next. Before you know it, you've inhaled fifteen hours of television, your fish has died of starvation, there are fruit flies holding conference above your garbages and you're beginning to raise dust clouds like Pigpen from Charlie Brown. But at least you know what happened to Tony Soprano at the end of the series. Oh wait...
I would say HBO has become a little more hit and miss lately, as far as the potential for addiction their shows present. Don't get me wrong, they're still the best production company in television and all their shows are still of a quality most other small screen producers will never touch, though many are trying (AMC is getting the closest). But The Newsroom, written and created by the man-with-the-magic-pen Aaron Sorkin, represents the kind of TV HBO is known and revered for.

The Newsroom concerns a man named Will McAvoy, a television news anchor who takes a no nonsense approach to his job and his life. He struggles, much like Tony Soprano did, with emotional issues and the consequences of a stressful life and a stressful job and the balancing act that goes along with them. The show also deals with the lives, relationships and issues of the people who work behind the scenes of the show in the titular newsroom itself.

I love behind the scenes representations of television, newspaper and movie sets. Sorkin is a master of this idea in his creations. Whether it's the running of a baseball team (Moneyball), the creation of the largest social media tool of all time (The Social Network), the inner workings of the white house (The West Wing), or the behind the scenes action at no less than three fictional television shows (Sports Night, Studio 60 on the Sunset Strip, The Newsroom), Sorkin creates believable drama and believable goings on behind the curtain we rarely get to see, but love to know about. Sorkin uses a neat technique in this show by having the fictional news program, called ACN, report on actual world events that happened between 2010 and 2011. Some of the things they touch on are the killing of Bin Laden (this episode holds extra weight as the show is set in New York City), the Casey Anthony trial, the Gulf of Mexico oil spill and the big earthquake in Japan that nearly caused a nuclear meltdown in Fukushima. It's a cool way of doing it and, for people that actively avoid the news like me, makes every episode fresh. There's a lot of political reporting on the show as well, as Will's character takes on the Tea Party (not the band) and challenges any politician who isn't living up to their promises. In all honesty, a good half of it goes sailing over my head, but it's again to Sorkin's talents as a writer that I never feel lost or uninterested. In fact I'll go so far as to reveal that at the end of two episodes, I was in tears. It's that good. There really isn't a thing about The Newsroom that feels artificial and another big reason for this is the office politics of the characters and how they're written.

Everyone knows about work drama. It doesn't matter where you work or who you work with, you work there long enough, drama will present itself. In an office environment, largely made up of young, single, and in many cases attractive bodies, that drama is going to centre on 'feelings.' This person has feelings for that one, who has feelings for someone else, who kinda sorta has feelings for you but isn't looking for anything serious. It's a soap opera. But it's real life and Sorkin knows this and so when, for example, a couple on The Newsroom break up and make up and curry more drama in four episodes of The Newsroom than Ross and Rachel did in four seasons of Friends, you buy it.

The Newsroom is impeccably cast. From big name stars to relative first timers, they cast this show like they didn't have a choice. Like the casting god of filmed entertainment, up there on his throne of empty film reel canisters, giant grin and giant tub of endless buttered popcorn (real butter, not the chemical crap they peddle at the multiplex), visited the show's creators in a dream vision and whispered; "Will McAvoy...Jeff Daniels, Charlie Skinner...Sam Waterston.."
The show essentially rests on the shoulders of the McAvoy character, this is made apparent from the first scene of the first episode in which Will, a guest on a panel show taking questions from audience members about the state of the country, answers the question "what makes America the greatest country in the world,"  with a rant about why America isn't the greatest country in the world anymore, but why it could be if it got its act together. It's a brave speech, a true speech, and one of the finest moments in recent television history. To have someone sell such a stirring and important monologue (it could be argued the entire curve and narrative of the series rests on that one speech), you need an actor of a certain gravitas. A certain charisma and charm who exudes intelligence and a no bullshit attitude in equal measure. A man like Harry Dunn from Dumb & Dumber. Honestly, if you watch Dumb & Dumber and then watch The Newsroom, you'd scarcely believe it's the same guy. Sure he sounds the same, looks the same (he's a little better dressed in The Newsroom) and even has some of the same facial mannerisms, but it's to Jeff's great talents that you don't for a second believe Will McAvoy is not a real news anchor while watching the show.
Sam Waterston as Will's boss Charlie Skinner is the second best thing the show has to offer, acting-wise. Playing an aging, wise ass, alcoholic network head, he's a huge presence in every scene he's in.
Emily Mortimer plays Will's ex and executive producer, in a twist that would be cheesy and unrealistic if it wasn't explained so well, and is easily the most annoying character in the Room, but she's written that way and Mortimer plays it well.
The rest of the cast is, as I said, fantastic and well cast and too many to go through person by person but contributes to one hell of an ensemble. I especially enjoyed seeing Slumdog Millionaire's Dev Patel in something befitting his talent.

The Newsroom is a little strange in its story arc in that, on the one hand it does follow one, things are referenced from other episodes and such, but on the other hand, the arc is not so strict that it prevents you from hopping in midseason and not feeling lost. Each new episode has its own story and its own arc, rather than having the entire series continue on with the narrative introduced in episode one. I still strongly recommend you watch all the episodes, but more for the benefit of getting to know the characters in a personal way and becoming more involved in the show in that way. Also because every episode is fantastic and not to be missed.

So I watched all ten one hour episodes in about a week. I didn't have any marathons that invaded my livelihood the way The Sopranos or the first few seasons of 24 did, but the show went by fast, gave me an inside view of the workings of a nightly news show, and all ten episodes went down smooth, like butter. Real butter, not the chemical crap they peddle at the multiplex.