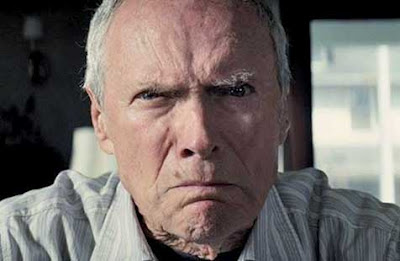 Oh, I don't care Clint. I really don't. I don't care that the character you play in Trouble With the Curve is the exact same one you played in Gran Torino and Million Dollar Baby. And that's it's essentially the same one you played in Space Cowboys and Unforgiven. I don't care about that because you're the man and you play grizzled and pissed off and soft, yes soft (but only after many many layers of tough concrete-like exterior that it takes a special someone to break through), better than anyone.
So I don't care about that.
And I don't care that probably the only reason you did this movie was as a favour to the director, who was the A.D. or Producer on your crew for over twenty films. I don't care because that makes you a good guy and a good friend, knowing that this is his first film and knowing he'd have a hell of an easier time getting it made and getting asses in the seats with your iconic moniker heading the poster art. It did mine.
I also don't care that the film is overly sentimental and that everything in it in regards to the plot is just a little too clean and obvious and unoriginal. I don't care that the flashback scene and revelation it revealed was hokum.
I don't care that this is one of your 'middle movies.' You know the ones, Clint. They fall snugly in between your masterpieces and your pieces of crap.
Finally, I don't care that the unfortunate timing of this film you're in will almost certainly cause it to be unanimously seen as 'the not as good as Moneyball' baseball flick.

I may not care about any of these things, Clint, Mr. Eastwood, Movie Icon No Bullshit Legendary Man with No Compromise, but just because I don't doesn't mean I didn't have my own trouble with your Trouble. It also doesn't mean that trouble was all I had. Which, again, puts this in the company of your 'Middles.'
But given the choice between an okay movie with you in it or an okay movie without, I care very much that you're still with us, on the screen and off. Please live to be 200. Thank you.