"Wendy, darling, light of my life, I'm not going to hurt you, I'm just going to bash your brains in" 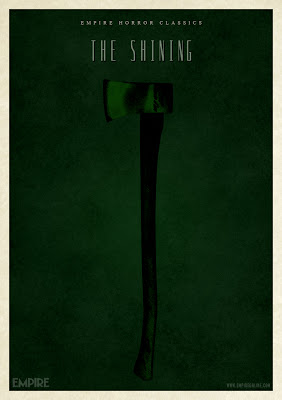 The Shining opens with an unforgettably virtuoso shot of a small yellow car winding its way through the Colorado Rockies. The car is eclipsed in size by the landscape that surrounds it: An endless blue lake sparkling and shimmering like the walls of a diamond mine, rows upon rows of tall standing trees, straight and true in lush shades of green and the huge muscular mountain that supports the road the car travels on. The road curling around the mountain like a mammoth telephone cord around a finger.
At one point the camera swoops in until we are almost touching the back bumper of the car and then swoops out again over the lake. It's beautifully conceived and looks amazing. Perhaps an oddly tranquil opening then, for the greatest horror film of all time.

I've seen The Shining at least twenty times. Probably more. It's one of the ten best movies I have ever seen and I have rarely watched it without picking up on something new, or noticing something I hadn't before.
There's a documentary out there around about now called Room 237 that is solely about the hidden meanings and mysteries director Stanley Kubrick tucked away in the film with the intent that people would find new things every time they watched the film, if they were paying close enough attention. While I don't look as deeply into the film as the people who made that doc have, I can see where they're coming from. The Shining isn't just another horror film, or an example of indulgence on the part of its director, as some people have suggested, it is an experience that sets out to put you through the ringer, and does.

Despite being regarded as a classic now, The Shining wasn't a big movie when it came out in 1980. It started slow in the box office and met with a great deal of critical derision and disapproval, not helped at all by Stephen King, whose book the film was (somewhat loosely) based on, being very publicly of the opinion that the film was a piece of crap. Well, that's fine and well for you to have that opinion Stephen (and whether he holds it still I don't know), but let's look at the respective track records in movie terms between you and Kubrick. Any movie King's participated in has wound up being a cheesy B-movie bomb and every single film Kubrick made while he was still making them is now regarded as a masterpiece. Still, when one of the best known, most loved and best selling authors of all time says you're adaptation of their book stinks, people listen. It's worth noting that King did his own made for TV movie version of The Shining that, while much more faithful to the original novel, is considered by no one as the superior version of the story.

One of the detractions the film has faced over the years is Jack Nicholson's performance as Jack Torrance, calling it campy, over the top or indulgent. I'll agree it's over the top, but let's talk sense here people, he's portraying a man who at first gradually, then quite rapidly loses his marbles. Is there a way to play bat shit crazy without going over the top? Is that even possible? Nicholson's performance is one of the linchpins of the whole movie. It may be, in my opinion, his greatest screen achievement. Anyway, it gave popular culture one of its most famous and enduring cinematic quotations and images with the 'here's Johnny' bit.
Shelly Duvall, for her part, does very well holding her own acting in scenes under the shadow of such a big star and personality. The Wendy character she plays is very annoying for the first half of the film, but I think she was written to be. The second half, as Jack is in his free fall from sanity and the ghosts of the hotel are closing in, sees her in utter desperation and torment mode. You feel exhausted just watching her. In a documentary filmed by Kubrick's then seventeen year old daughter entitled simply 'The Making of The Shining' there is a scene in which we see Shelly Duvall laying on the ground in between takes, surrounded by people after collapsing of exhaustion on set. We also see Kubrick being very hard on her with his direction in an effort, we learn later, to keep her fraught with anxiety and emotionally in a similar frame of mind as her character. Is this going too far, asking too much of the actors? Maybe. But Kubrick was a consummate perfectionist, a director who was infamous for filming forty or fifty takes of a single scene. Maybe that's why Danny Lloyd, who plays Danny Torrance with more acting skill than a child his age has any right to have, made The Shining his first and last experience with commercial filmmaking.

One of the film's most impressive and well regarded set pieces is the dolly cam shots of Danny riding his big wheel through the Overlook's endless corridors. The camera is so close to the ground as it follows Danny it actually sits lower than he does. The camera operator had to invent a special kind of steady cam (one that is used all the time now) in order to achieve the shot Kubrick was looking for. The shot itself looks  and sounds amazing, the way the camera swallows up the uniquely patterned carpet coupled with the sounds of the big wheel on the floor.
The visual virtuosity doesn't end there. From the over-exposure of light shining through the windows into the Great Hall, to the cold blue washout of the chase through the hedge maze near the end, the entire film is filled with shots and sequences that are so sweepingly complicated and assured, I can't think of a living director who could replicate them. This visual elegance is complimented by the movie's score, a compendium of wailing, screeching strings and plinking, plunking piano noises whose job it is to get under the skin and yank the nerves and it does its job well.

The story itself is fairly simplistic, though not so much so that it can't be met with interpretation. Part of this is in the way Kubrick chooses to interpret the hotel's 'ghosts' if that's what they are and part is due to the ending.
The end is purposely ambiguous, leaving the door open for endless discussions and theories into it's meaning and relevance, or lack thereof: Is Jack Torrance Grady? Is he himself a ghost? Do Wendy and Danny even exist outside of his own mind? Or is it the simplest little bit of previous exposition that wins out? That all the strange happenings and goings on are the result of the hotel being built on an Indian burial ground? I'd like to think not. I refused to accept the most obvious explanation for the ending of The Dark Knight Rises  and I refuse to accept it here. Filmmakers like Nolan and Kubrick are just too talented, too sneaky and too intelligent for things to end in terms of such black and white.

The Shining is intense, bloody and shocking, even by today's standards. Martin Scorsese called it 'one of the eleven scariest horror movies of all time' when it was released some twenty-two years ago and it still has the power to occupy a spot on that list in 2012.
Never before or since (with the possible exception of Silence of the Lambs) has such expert artistic craftsmanship met with the horror genre in such an effective and overwhelming way.
In Europe The Shining runs at 119mins. In North America, 144. The difference? The European cut has most of the shots that take place outside the hotel taken out, leaving the viewer to spend the entire two hours cooped up with the 'inhabitants' of the Overlook inside its walls. An arguably even more claustrophobic and draining experience. Then again, the 144min version has half an hour more of The Shining to watch, admire and appreciate. A case could be made for both.