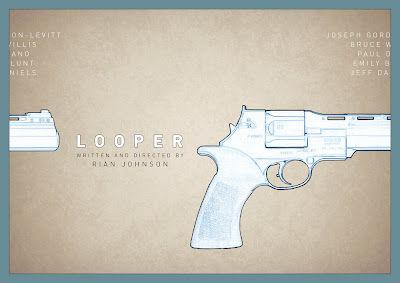 I can't think about time travel. The whole concept is enough to send my mind into spirals of thoughts so deep I'd be scared of it getting lost down there. The implications of the butterfly effect resulting from screwing around in the past and how that effects the present are endless. I have a great deal of respect and admiration for any storyteller who sets his quill to the subject of time travel and presents it in a cohesive and entertaining package.
Rian Johnson's brilliant new film takes place in 2044, a not too distant future where the city's canvas Johnson is painting on looks familiar but has some futuristic tweaks here and there. And the tweaks for the most part are logical ones. Take the vehicles. The cars and trucks look like cars and trucks look now, or even ten years ago, the only outwardly difference being a hose that's inserted in the gas tank and wraps around the vehicle disappearing into some other area. This simple mechanism isn't explained but appears to be a way for the car or truck to recycle its own fuel, perhaps in response to humanity having finally used up our natural gas resources. Again, that isn't explained and frankly doesn't need to be. Part of the fun of these futuristic tales that wisely avoid too much exposition dialogue is coming to our own conclusions for the whys and hows of the film's present worldly state. There's also no mention or indication of an apocalypse having taken place. A nice change for a future set story.
So thirty years on (2044) time travel is invented. Wisely it is immediately outlawed, but as they have a knack of doing, organized criminal outfits get their mitts on the forbidden and use it in this case as a means of disposal. The disposed of items here being human lives. This is an ingenious plot point. The mob wants you whacked, sends you back thirty years with some money strapped to your back to an awaiting Looper (more on them later) who gives you a Blunderbuss (futuristic short range shotgun) to the chest as soon as you appear before them. Then they chuck you into an incinerator and a body that technically doesn't exist in the present time disappears with no fuss, no muss. I'd like to see a season of The Sopranos go down in this environment.
The great Jeff Daniels plays an unkempt, scraggly crime head in the movie's present time who was sent back from the future to hire and organize these Looper assassins. When something goes awry, like 'letting a loop run' (letting your kill get away), it's up to Jeff's character and his plentiful henchmen to clean it up.
If someone in the future decides to fire a Looper, he sends his present self back to his past self (2044's present self) to be executed. His younger self gets a handshake, a hefty payday and another thirty years. This is called 'closing a loop.'
Bruce Willis is sent back to Joseph Gordon-Levitt, who both play the same character, to close their loop. Willis gets away, Levitt's in trouble with his boss, meanwhile there's a future sadistic crime boss called The Rainmaker who's just a child in the movie's present and if I say anymore it will ruin the fun of experiencing this wonderful story for yourself.

Respected motormouth film critic Mark Kermode said that Looper was a film that moved fast so that you didn't have time to catch the plot holes and inconsistencies. I completely disagree with that. I saw Looper twice within the space of a few days, had lots of time to think about it in between and during the second viewing even purposely looked for holes and inconsistencies and found none. The plot is as tight as a rubber ball and not nearly as predictable. I won't comment on how plausible it is because it's a science fiction film that takes place in the future and commenting on its plausibility is not only unfair it's just silly. On that note, I will say that every effect, every set piece, every weapon, vehicle and building was not only believable but looked entirely organic. I'm not saying they didn't use CGI in the film, I'm sure they did, I'm just saying you couldn't tell.

Looper does move fast though. It moves like a bullet and when it does break for monologues or tender moments, it makes up for it in the next scene with some heavy action or mind blowing intensity. Believe me when I tell you, take a leak before you see this movie because when the curtain cracks you won't want to miss one minute.

Rian Johnson is a filmmaker to keep your eye on. His brilliant debut film Brick, a murder mystery noir involving high school students who all speak like they're in a Raymond Chandler novel is one of the best debut films of all time. His less enthusiastically received follow up, The Brothers Bloom, a twisty-turny con man movie who's plot is so intricate and twisty you'll spend the entire film questioning what you're seeing, was amazing. With Looper his impressive track record has officially become a hot streak. This is his best film so far. I hate to point out the obvious, but he stands alongside Chris Nolan as one of the most intelligent, original and exciting filmmakers working today.
A happy bonus then that this is also Joseph Gordon-Levitt's best performance. Levitt's had an amazing last couple of years and while he's always been a good actor, his Bruce Willis here is perfect. The obvious representations of a younger Willis, and the nuances. Bruce Willis, for his part, is Bruce Willis. He's not known for his versatility, he's known for being Bruce Willis. He doesn't do anything different here he hasn't been doing since Die Hard, but it works. Emily Blunt's fantastic, the under-appreciated Paul Dano is fantastic, of course Jeff Daniels is always a beaut. Just one hell of a good ensemble cast.

When Joe and Bruce meet and there's discussion of time travel and things that happen to Joe create memories in Bruce's head, or wounds that are inflicted upon Joe appear as scars on Bruce and so on, those are the thoughts and spirals that I dare not think too deeply upon. Thankfully though, I don't have to, because Rian Johnson did that for me. He worked out kinks and crafted a story and a world to tell it in and characters to populate it. He worked out a way around the future depletion of natural resources (from what I got), and through it all made a fast paced, well told, hugely entertaining film with an amazing ending and is the best movie (so far) of 2012.