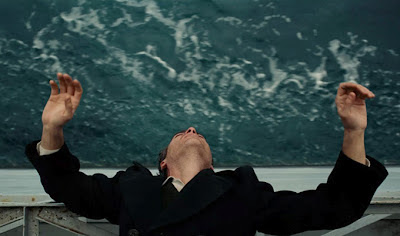 I just cannot get a handle on this film. I've seen it twice now and can't work out my feelings for it. It feels empty, like an empty experience and yet I find my mind continually drawn toward it like a moth to flame. There's something about it that can't be readily explained but that is powerful in some way. I don't know if I've ever had such a unique reaction to a film before.
Of course there are things that are apparent and identifiable insofar as the mechanics of the film are concerned: The acting is superb. Oscar nominations are all but guaranteed for Phil Hoffman and Joaquin Phoenix. The direction and cinematography likewise. This is a film which is made up primarily of close ups and extreme close ups, so that every uncomfortable monologue or awkward moment is impossible to escape. The sets are beautiful, the 50's setting creating that artificial representation of normalcy in a decade when dysfunction and unhappiness boiled and bubbled over behind closed doors and created a facade of the perfect American family living out the Dream which was as much of a joke then as it is now. The fear, depression, displacement and paranoia of the times leading itself almost eagerly to prophesy and charisma in the form of a man with a cure-all treatment which didn't cost money, require surgery, or interfere with jobs or relationships. Just a series of questions which would lead you to a rediscovery of the soul inside yourself which has lived many lives throughout many thousands of years. And it is this rediscovery which, when awakened, would realign whatever emotional or psychological discord you might be suffering. In The Master this man's name is Lancaster Dodd. Author of the book and philosophical movement known as The Cause. Dodd is charismatic, jolly and committed. He is intelligent, or is good at giving the appearance of being so. The film doesn't say where he got his ideas for the treatments he practises, but he never wavers from his seriousness towards their authenticity. At one point his son, when asked why he's sleeping through one of his father's speeches, says matter of factly that his father is 'making this up as he goes along.' There's an uneasiness to this character and the way Hoffman portrays him. On the one hand, he's perhaps a wacko. A man who believes he holds this implausible key for happiness through philosophical and psychological time travel. Then again he could just be in it for the money. That age old religion-based swindle perpetrated on the gullible and the weak that salvation lies within the wallet. Or perhaps it's power and affection he craves: Start a cult, recruit some followers and relish in the praise and devotion that comes of it. Whatever the case, the unease we feel of this character comes from the fact that in spite of these possibilities, Dodd is a fun, likeable guy. Loves a stiff drink and always a party going celebrating some event. Sings and dances and bleeds sincerity even as you feel the wool being pulled over your eyes.  These are dangerous men. Men that prey on the weak and make the Kool-Aid worth drinking. Men that prey on men like Freddie Quell.

Hoffman's Lancaster Dodd is such a screen filling presence and such a believable and larger than life character that it would be easy to think that he's the film's protagonist, when in fact it is Joaquin Phoenix's character Freddie Quell's story.
Quell is a Navy man who is like a floating weed after the war, as so many men were. No direction, no prospects. His talents left on the battlefield, except an odd and unique gift for brewing different types of very potent moonshine. One day a man drinks too much of Freddie's shine, is poisoned by it and Freddie, on the run, stows away on a boat headed to New York City which contains Lancaster Dodd and the members of The Cause. Freddie, eager for direction and easy answers, falls in with the group and under Dodd's spell, bonding with the cult leader and forming an uneasy Father-Son relationship with the man.
Unlike Dodd, Freddie is not a very likeable character. Crass, crude, sex obsessed, volatile. Like a stick of dynamite kept in the hot sun, you feel he could explode at any moment, for any reason. It's an odd dichotomy (director) Paul Thomas Anderson paints with these two. Dodd is more likeable but easily more sinister and Freddie is unlikable but the one more deserving of our sympathies.
The film is superficially little more than Freddie's introduction to and sampling of the methods of The Cause. On another level, it's about the relationship that develops between these two men and on another level still it's a character study. Some say of L. Ron Hubbard, and his formation and methods related to Scientology. I don't know anything about Hubbard or Scientology so I can't comment on that.

And that's about it. That's all it is. It feels thin. Feels incomplete, even at two and a quarter hours. It feels like it's presenting itself and telling its story with one arm even as it's holding you back with the other. Is this intentional? Could be. I refuse to believe a man with the enormous filmmaking talents of Paul Thomas Anderson, creator of such instant classics as There Will Be Blood, Magnolia and Boogie Nights, would make a film with such a cold, empty feel as this one if it was not intentional. Certainly for the great number of us who are not, nor have been in a cult, the subject and methods themselves are a cold, strange beast. Existing in another plane of existence with groups of people who run in circles we do not.
So I just don't know. Maybe one day, years from now, I will watch the film for the third (or tenth) time and something will click. The clouds will part and the sun will shine and the intention and subtext will be made clear. Maybe at that point I will see the film as a masterpiece, as some critics already do and my opinion of the film will slide into place at last. Or maybe the film will remain a mystery. Or maybe I'm just trying too hard to like something I don't want to admit is a disappointment. It just doesn't feel that simple to me. It feels like a puzzle I've lost a piece to. A piece that connects a number of other pieces and forms a whole.
For now, at the very least, it is a film that contains the two best performances of the year. Thank God I'm Still Here was just a ruse. To lose a talent as great and as huge as Joaquin Phoenix would be a tragedy. And with his performance here as Lancaster Dodd, Philip Seymour Hoffman is officially film's greatest living actor.
In an age when every other movie is a comic book adaptation or a sequel, to see a film as unique and uniquely made as this get a wide release fills me with hope and excitement.