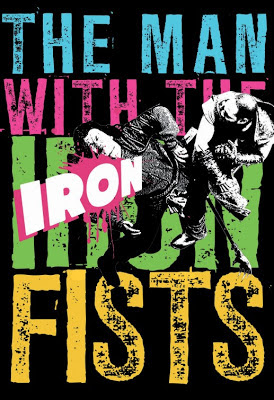 Ah, the Wu-Tang Clan. You know, when I was in school, I hated rap. It was almost all punk rock and a few of the classics like Chuck Berry, Fleetwood Mac and The Beatles for me. I hated rap, except for the Wu-Tang Clan. I always loved the Wu-Tang. The flow, the lyrics and brilliant beat production heavily influenced by Asian cinema and Kung-Fu, and the immense wisdom and talent of the Clan's 'abbot,' the RZA, the brains and beats behind the entire Wu catalogue. There has never been any doubt in my mind that RZA is a musical genius. His few brief roles in films like Ghost Dog, Coffee and Cigarettes and American Gangster, among others, have also shown him to be a none too shabby actor and now, finally, we have his long gestating, highly anticipated 'Kung-Fu epic' The Man With The Iron Fists.
Anyone who knows anything about RZA or the Wu-Tang Clan in general, knows that he is a Kung-Fu film buff. This guy's seen any Kung-Fu film you can name and can tell you the life stories of the people who made and starred in it. But while you would think that encyclopedic knowledge and raw artistic talent would transform into one hell of a fight flick, The Man With the Iron Fists is surprisingly bad.

In the cinematic universe, there are good bad movies and there are bad bad movies, this is especially true for Kung-Fu films. While all of the above operate throughout their respective runtimes with a certain level of cheese, there's a big difference between cheesy goodness and the mouldy kind. Usually, in the old chop socky flicks anyway, you put up with the silly dialogue and the terrible acting and get rewarded for your endurance with amazing feats of Kung-Fu artistry. Unfortunately, in the case of Iron Fists, the fight scene payoff's just don't make up for the sillier bits. The fighting in the movie is big, bloody and gritty, but it isn't as adrenaline spiking as the fighting in The Raid: Redemption and it isn't as real and impressive as in those old fight flicks that RZA is attempting to emulate here. The direction and camera work is great though, there are many beautiful shots and cool, imaginative angles. This is a movie with style to spare, just no substance to augment it.

The plot will be immediately familiar to anyone who has ever seen one of the old classic Shaw Brothers Kung-Fu movies: a big chest full of gold is making its way over an Asian province and gets intercepted in a small village where there exists warring gangs and a talented weapons maker (played by RZA). A large British man also arrives with unclear motives (played by Russell Crowe) and gets involved with the weapons maker and the Kung-Fu stew that's beginning to stir up.

It's to RZA's credit as a respected figure in the entertainment industry that he was able to secure such heavy hitting acting talent as Russell Crowe in the film, who plays a character in a story that's quite a bit different from anything he's done before.
But it is just this reputation and talent as a producer and musician that illuminates the best thing about The Man with the Iron Fists: the music. From the exciting first scene, a remix of Wu-Tang's well known song Shame on a Nigga with orchestrated music weaving in and out of it over images of two men engaged in battle, this is a film that pulses and ripples from beginning to end with an impressive array of talented hip hop artists and a score that swells and soars and is deserving of a much better film than the one it got.

Whether RZA was going for a good bad film, a bad bad film, or just a straight up good film, one gets the sense that the end product wasn't quite what he had in mind. Even in a genre that asks as much continuity and common sense forgiveness as Kung-Fu, there are things big and small which get in the way of a good time. Big things like plot threads left hanging, mystical powers unexplained or all the Asian people in an Asian village having American accents, to little things like a man who can turn himself to steel to repel knife blades and bullets but all the while has his nose pierced (?), to the corny, uninteresting story and the fight scenes which just never take off the way they should.
Considering how long RZA's been talking about this film, how obsessed and knowledgable he is of the genre, and how anticipated the film has been for his fans, this is a huge disappointment. If nothing else though, The Man with the Iron Fists did give us one of the best movie soundtracks I've ever heard. I'm listening to it right now.