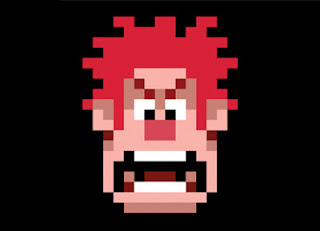 In 1988, a film that could truly be called groundbreaking broke some ground by being the first full length feature film to co-star cartoons and humans. In the universe that was Who Framed Roger Rabbit, 'toons were living things, working joe's that inhabited the real world and interacted with the flesh and blood folk. I remember playing a VHS tape I had of the movie on a pretty much constant loop for a big chunk of my childhood. After watching that movie I began to see cartoon characters the same way I saw movie stars. Homer Simpson and Aladdin were famous actors the same way Jack Nicholson and Mel Gibson were. Of course I knew these cell drawn animations weren't living, breathing things, but it was fun to imagine they were.
With video gaming a multi-billion dollar industry, making more per year even than movies do, it's hard to believe a story like Wreck-It Ralph hasn't been made into a big commercial film before. Unlike Roger Rabbit, whose story had to wait until technology could place the eponymous bunny and Bob Hoskins in the same room together, Ralph's story was ripe for the telling and now that it's out, and will be a financial and critical success, trust me, I expect we'll be seeing movies take place in video game universes the way Ralph does much more often.

Ralph isn't all that far removed from the reality Robert Zemeckis asked us to swallow for Roger Rabbit. Or the one John Lasseter (who's a producer on this film) asked us to swallow for the Toy Story movies: That pretend things are and can be real. Whether they're walking around right in front of us, or they come to life when the coast is clear or when, in Ralph's case, the store is closed. 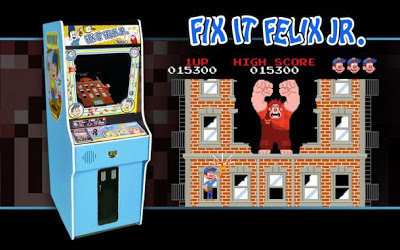 Ralph is the bad guy in a video arcade game called Fix-It Felix, Jr. The game itself is basically the old Donkey Kong Nintendo game. No, the old Donkey Kong Nintendo game. The one that was before my time, where Mario has to get to the top of a structure to rescue the Princess from the evil Donkey Kong, who is chucking barrels down at him. In Fix-It, Ralph decides to smash an apartment building up and Fix-It Felix has to fix the damage done and rescue the tenants before its too late.
One night, after 30 years of service, Ralph decides that he doesn't want to the bad guy anymore, that it's lonely and unrewarding and he goes on an adventure to try to win a hero medal and prove to everyone that he isn't so bad after all. To do this he must 'game jump' which means travelling to other games (quite ingeniously through power cords) and participating in and winning their missions. He gets sidetracked when he meets a girl in a racing game called Sugar Rush, which has fallen under the rule of an evil king, and unexpected (to him, not us) heroics ensue.

Painting on a canvas as broad and imagination-ready as video game universes, the filmmakers have crafted a really beautiful looking movie. Most of the action takes place in Sugar Rush, which is a world made entirely of sweets (some inspired locales include a Nesquik sand pit and an exploding volcano made of Mentos dropping into diet cola) which you can tell the filmmakers had a lot of fun in creating. A bad guy support group meeting that takes place in the Pac Man game, and even Ralph's own modest digs may not provide the pop and colour explosion that Sugar Rush does, but are all great to look at and fun places to spend time in.
But you can't have a movie that's just places with no one to occupy them (unless you're Planet Earth) and this is another area in which this movie excels: Every character in the movie, from the main ones to the one liners, are voiced to perfection by some very talented people. The fantastic to watch and impossible not to love John C. Reilly is Ralph and after seeing the film you couldn't imagine Ralph having any other voice. Jack McBrayer is Felix, which was good casting as Felix is basically the character Jack has been playing his entire career. Sarah Silverman, Jane Lynch (also playing the character she's been playing her whole career), Dennis Haysbert, Ed O'Neill and Alan Tudyk all round out the cast and are amazing as their respective creations.

If you've seen a children's movie, and chances are you have, you'll know where Wreck-It Ralph is headed well before he does. It follows the basic narrative structure that all animated family films do and that's too bad because there were a couple of places in the story they could have really done something different without offending anyone and still they decided to play it safe. I can't be too hard on them for that though. You go to see a family film, you should know before going in that nine times out of ten, you're going to get a family film story structure. There were also a couple of plot holes and inconsistencies left unexplained that they could've tightened up on, but other than that Wreck-It Ralph was a lot of fun.
It's a great idea for a movie, one that feels fresh, despite the safe narrative choices, looks amazing and has a lot of heart and a lot of imagination. I loved it, my kids loved it, what more do you want from a Friday matinee?