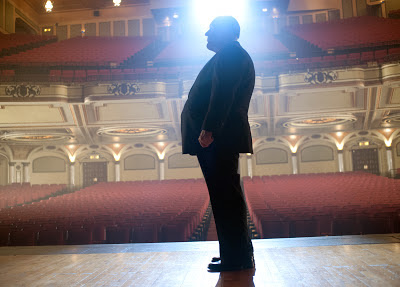 Alfred Hitchcock awakens after a dream. A disturbing dream to be sure, but a dream just this side of a full blown nightmare. He has dreamt of Ed Gein, the 1950's 'Butcher of Plainfield' in Wisconsin, the murderer and body snatcher whose crimes and evil deeds are still the most horrific and grisly American murder has known. In the dream he witnesses Gein kill his brother with a shovel after his brother offends him by suggesting he leave his mother's side. Hitchcock, a sucker for the dark and depraved, is fascinated by Gein and wants to make a movie about him.
If this scene in Hitchcock is to be believed, then Hitch is kindred spirits with later horror maestro Wes Craven, or vise-versa, as Craven has said that he came up with the idea to his greatest film, A Nightmare On Elm Street, in which a razor fingered child murderer hunts and kills teens in their dreams, by having a nightmare about him.
And while what ultimately resulted from Hitchcock's initial audience with 'the Butcher' would be much less scary or bloody (that's not to say better) than Craven's popular flick 24 years later, it was one of the scariest, most violent, most shocking mainstream Hollywood movies that had ever flickered in the shadows. In short, it hit the world like a bullet, or, more appropriately, like a knife plunged into the chest of a blond bombshell.

Hitchcock loved a dirty joke. One of his favourite things to say to people he liked when they called him 'Mr. Hitchcock' was 'call me Hitch. Hold the cock.' Even in his most murderlicious thrillers, his darkest films, there was always plenty of black humour to run alongside the more serious notes of the plot. It's very telling then, that Psycho is a film in the Hitchcock cannon in which that black humour is the least present. He was taking this film deadly serious and from moment one of the momentous shower until the final moments of the film, staring into Norman Bates' eyes as he sits wrapped in a blanket smiling that sinister smile into the lens of the camera, he wanted the audience to be wrapped as tight as a rubber ball. He wasn't giving anybody the chance to let the steam escape into the rafters by throwing a joke or a jovial moment into the mix.

Going on this film alone, Alfred Hitchcock and Alma Reville did not have a good marriage. He, flirtatious and obsessive with the woman he hired to anchor his films, a sucker for the young, blond, innocent victim. She, his anchor, his second in command, his co-director, his co-everything. Being forced to stand idly by while he fell head over heels for another Hollywood lollipop. In this movie they both flirt, lust for other people and tap dance on the line that divides the faithful and the adulterous. Hitchcock is filled with a paranoid jealousy and we get the sense he could not get along without her. It is pure ego to think he could have the best of both worlds. And he has plenty of that.
The Alfred/Alma relationship is the main focal point of Hitchcock, more so even than the movie this film should really be about. And while the film does provide some interesting back story and a few entertaining anecdotal vignettes in regards to how Psycho came to be (I personally loved a scene in which Hitchcock is arguing with composer Bernhard Hermann over the score, something which every filmmaker who worked with the egotistical and notoriously hard to work with composer did ad nauseum. Though that, too, was too brief) the personal life of Hitch crowds the picture and pushes Psycho to the background, ultimately making for a film that feels much too light, too thin for such a potentially beefy movie-about-a-movie.

Hitchcock probably should've been called 'Hitchcock for Beginners' as those with even a rudimentary understanding of the man and his work will find very little here they don't already know. Anthony Hopkins gives a nice performance, but the only resemblance to the actual man he's portraying exists in his physicality. I don't know, but highly doubt that a man of Hopkins' age would've put his body through the ordeal of piling on the pounds required to play a figure who was as at war with the spoon as Hitchcock was, but his rotund appearance is convincing. He face still looks like Hopkins and he certainly still sounds like Hopkins. Toby Jones' performance as Hitch in HBO's much better Hitchcock film The Girl was more impressive and accurate, even as he looked less like the man than Hopkins did.
The film is pretty cheesy, breezes over the shower scene, a scene which alone a whole feature film could made about, and feels much too lighthearted and playful. I know the Hitchcock estate refused to cooperate with the filmmakers and as such they were unable to use certain elements that might have otherwise made for a much more informative and entertaining experience but even that doesn't entirely account for its malnutrition. It's not a bad film though. It's well made and acted and a nice kicking off point to the uninitiated, but the feature length documentary on the making of Psycho found on the special edition DVD is an infinitely more informative and (and here's the sad truth of this film) more entertaining two hours than this was.