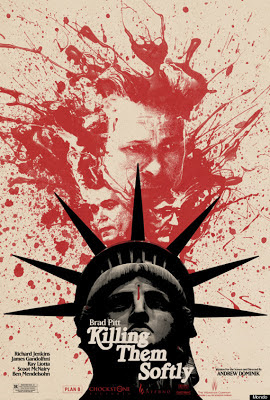 Two kids walk in the back door of a laundromat with shotguns in their hands and stockings on their heads. They're young, mid to late 20's, and stupid. Driven by greed and drugs and ego, they stick up an illegal poker game being played by some of the city's most feared gangsters. Piles of cash being pushed around, won and lost and all of it just sitting there for the taking. Like an oblivious country mouse in an empty field at dusk and a night owl closing in fast, quiet as a whisper.
But like a large bird of prey sitting hidden in the wings, keeping a silent vigil on the mouse from afar, what the owl doesn't know is that this simple country mouse has powerful friends and that to snatch it up means the hunter will become the hunted before the night is out.
Back room card games are big business in this rainy city and every time one is held up, which is very seldom, all the games are suspended until further notice. The mobsters sitting higher up the chain of command don't like this disruption and all efforts are made to find out, and kill, those responsible for it. This is the story of Killing Them Softly.

Brad Pitt plays an assassin from another town brought in to find and deal with the men behind the holdup. The year is 2008 and on every radio, every television set, George W. Bush is doing his best to calm his country as they plunge into financial turmoil. Meanwhile the Obama/McCain race is on and Barack can be heard delivering his familiar assurances that change must be made, and with him, it will be. Andrew Dominick is telling us something, maybe a couple of things. He's telling us on one hand that the recession hit everyone, legitimate or not, though some in different ways than others. He's also telling us that whatever may be going on out there, to the blue collars and the clock punchers, back here in the shadows, it's business as usual. However contradictory at times his sentiments may be, he lays them on pretty thick throughout Killing Them Softly.

Andrew Dominick is the writer/director of 2007's The Assassination of Jesse James by the Coward Robert Ford. A beautiful, expertly made and acted film that was one of the five best films of that year. The film was a meditative study on the life of the outlaw and its stubborn, easy pacing can be seen, in lesser strokes, here as well. But while that narrative form fit Jesse James, it isn't as well suited to the thriller format. In particular there are a few lengthy monologues in Killing, delivered with expert acting precision by the always intimidating James Gandolfini, that stop the film in its tracks and in general feel like bits you'd usually find in the deleted scenes bonus feature on the Blu-ray. But those scenes are ten minutes of hiccups in an otherwise almost two hours of fine entertainment.
A lot of the film takes place in the rain, the book the movie was based on, Coogan's Trade, by the wonderful crime fiction novelist George V. Higgins, takes place in Boston, but I'm not entirely sure where Killing Them Softly takes place. In fact, I'm not entirely sure they say so in the film. At any rate, it's a rainy, grey city, whose overcast, drab sensibilities suit the violent, edgy story and provide an emotional checkpoint for the viewer as the bodies pile up and the reaper (Pitt) closes in.