Fell in love with a girl 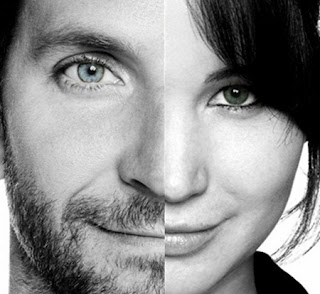 Silver Linings Playbook is probably the most positive film of the year. It's certainly the most positive film I've seen. It's a film about the struggle to take your life back from the grips of mental disease. It's a film about reestablishing familial relationships, about forgiveness and about recovering from heartbreak and about falling in love. I think most people who see the film will see a little of themselves in Pat Peoples, played by Bradley Cooper, even if they don't suffer a mental disorder. What's special about this film, and about Pat, is that his disorder is not what defines him. We meet him as he's about to be released from a mental hospital, sure, and he has quirks and episodes of emotion which are meant to tell us that he's struggling, but as the movie progresses we realize that Pat's strengths, and his weaknesses, don't come from his 'undiagnosed bi-polar disorder' but from the same places they come from in all of us. And the film is no longer about mental disease, it's about life.

Every family is dysfunctional. Every one. You can have wonderful, strong bonds and relationships with the people in your family and still there will be drama to some degree. You don't have to be from a one parent home, with a sibling in jail and another married to a biker for your family to be dysfunctional. David O. Russell has been exploring families and the things that make them tick his entire career. His films have rarely solely been about these things, but they are a part of everything he's done from the Gulf War (Three Kings) to the life of a boxing legend (The Fighter). He writes beautiful characters and great dialogue and always has a way of finding the heart in the situations he creates. He is a notoriously difficult director to work with, very hard on his actors, but perhaps this informs, as it did in the films Kubrick made, the performances he coaxes out of them.
The standout performance here is easily Bradley Cooper. Cooper up until now has had an unfortunate career for someone with the dramatic abilities he has. Lame big budget popcorn flicks, silly comedies, or poorly made dramatic films have dotted his resume and failed to ignite any serious consideration of him a major acting talent. But Silver Linings Playbook finally gives him the material, and the character, to change all that. He is perfect in this role, plays the troubled hero part with just the right amounts of quirk and emotion and if he stops agreeing to make those frigging Hangover movies, has a chance to really take his career to a different level. An Oscar nom is almost guaranteed.
Jennifer Lawrence on the other hand, came out of the gate swinging with Winter's Bone and has proven herself as a credible and talented actress with every role she has taken since. I don't know if this is her best performance, but it is another notch on her already impressive belt. Another nice surprise was seeing Chris Tucker in a serious role, and nailing it. He also has a real shot at proving himself a credible talent if he chooses more of these roles. Pretty much every role, big or small, is filled with huge talent in this film. Jackie Weaver, who was so good as the maniacal mother in Animal Kingdom a few years ago, is wonderful as Pat's caring, fretting mother, and Robert De Niro finally has a film to match his talent playing Pat's father.

It isn't a terribly long movie, sliding in at around the two hour mark. Which is good because it has some small pacing problems and by the end you'll feel like it's just beginning to wear out its welcome. And it's got one of those great endings that doesn't feel the need to wrap everything up in a pretty little bow, which doesn't often happen in life, so why should it in a film with very little fantastical elements, if any.
In general Silver Linings presents very difficult situations and then says, if these can be overcome, so can what you're going through. It's a fictional film and the situations never actually happened of course, but if Paranormal Activity can keep you awake at night with your mind playing tricks on you, and Requiem for a Dream can encourage you to never go near a street drug (or a pharmaceutical one for that matter), then Silver Linings Playbook can encourage you to find within yourself the strength to persevere and overcome. That's what a well written movie's all about. That's the power of movies. And that's why Silver Linings Playbook is the most positive film of the year.