With a fine tooth comb 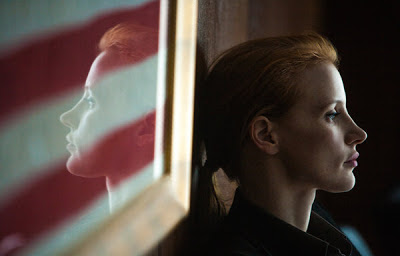 Zero Dark Thirty has the most disturbing kick off point of any movie I think I've ever seen. A title card informs us of the date, Sept. 11, 2001. Actual recorded broadcasts are played over a black screen. We hear the first news reporters, reporting on the first plane, we hear snippets of farewell cell phone calls to loved ones from people inside the second plane, we hear 911 calls from people trapped inside the second tower pleading for their life. Although it seems an odd thing to do, I think director Kathryn Bigelow, in part, put these horrific audio clips in to get the audience in an emotionally appropriate state so that the next few scenes in the movie, scenes of interrogation and specific torture practices, are better handled because the audience is on the side of the real people in those audio snippets. And justice must be served.

This film is currently under a hailstorm of controversy from different groups in America, though they are some of the same groups that seem to have something to protest about everything. One complaint is that the film is pro-torture, something Obama promised the American people would no longer be part of the country's interrogation processes. They allege this because in the film, the torture scenes, and there are a few, produce results, implying that torture is the way to go to get results. This is silly, if you ask me. Yes, the torture techniques in the film help in certain ways to get America closer to Bin Laden. But I doubt there are many men or women walking this planet that don't have a breaking point.
The second thing this film is under fire for is the allegation that the filmmakers were privy to top secret documentation that the public has no right or authority to. I don't know what to say about this except that if it's true, it helped them to make one of the tightest, most detailed, most realistic films of 2012. Which brings us back to the first controversy and a defence on the side of the filmmakers: torture was used in part to find Bin Laden and stop other acts of terrorism and Zero Dark Thirty is a film that doesn't water anything down or take it easy on the viewer, it tells the story like it happened and good on them for it.

While all this pro-torture nonsense might be enough to drive a wedge between the film and a best picure Oscar next month (the Academy aren't a very ballsy bunch, let's be honest) it doesn't detract from the fact that Zero Dark Thirty is an important film and a hyper-realistic document on what the film's marketing team has dubbed 'the greatest manhunt in history.' It's a true testament to the talent of Bigelow and her team that as unenjoyable as certain things in the film are to watch and as unpleasant a feeling you find yourself getting over and over while watching it, it sucks you in and is an almost compulsively engaging experience. You'll find yourself excited to see what happens next and feeling very edgy in situations to which you know the outcome.
I doubt brighter and quicker minds than mine will have this complaint but there is just so much information thrown at you during the course of the film, I found it hard to keep track of it all. Obviously the overarching purpose of the film and narrative is a line drawn straight enough: find Bin Laden. But I found the smaller details getting lost in the shuffle.

Pretty much the best thing you can say for a well known actor and a filmmaker, is if their film makes you forget you're watching a movie star. I don't know about you, but as many good films as Brad Pitt's been a part of, he's never made me forget he's Brad Pitt. In Zero Dark Thirty, Jessica Chastain, one of the busiest and more and more famous women working in Hollywood right now, was not Jessica Chastain for much of the picture. She was a women who worked for the CIA and was obsessed with finding Bin Laden. The same could be said for her performance in Lawless. She doesn't look any different, she just disappears inside her roles.

In a way, although they don't directly reference one another, watching The Hurt Locker is a good way to prepare yourself for Zero Dark Thirty, aesthetically if nothing else. The two stories are filmed and thus look and feel exactly the same. Which helps both pictures as gritty, handheld camera movements seem to fit the Afghan locations like a glove. And while The Hurt Locker was more action packed, Zero Dark Thirty is arguably more suspenseful. There are no virtuoso shots in this film like some of the ones found in the intense opening of Hurt Locker, but there are virtuoso sequences, like the one toward the end of this film involving the attack on Bin Laden's hideout. Apparently, writer Mark Boal has mentioned that he has another script which would serve as a more action packed prequel to Zero. If Bigelow decides to make that one next, this could end up being her Iraq war trilogy.

Zero Dark Thirty is a heavy film. It reminded me of Fincher's Zodiac and Kurosawa's High and Low, two other films with such meticulous detail and attention paid to their stories and how they're told, you can't help but be enveloped by them. You also can't help but admire them. I hesitate to call this film 'entertaining' though I'm sure many people will find it immensely so, and like Schindler's List or Hotel Rwanda, it will be those who were closest to the tragedy that sparked the manhunt that will have the strongest emotion reactions to seeing it portrayed on film, especially in such a realistic manner. It is a great movie though. An important movie. A movie much more deserving of attention for its accomplishments than for silly controversies.