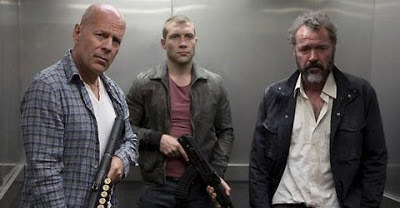 It could be said that John McClain was the first real action hero. A relative everyman. A cop with true grit and a snarky attitude. And, as we would see time and time again over the proceeding decades, the ability to kick some baddie ass and deliver a cheesy quip is a necessary qualification for violent slam bang-em's like Die Hard and the endless gushing river of imitators, tributes and satires that followed.
That first foray into McClain's various scrapes and scraps also set a number of important and definitive precedents for the eventual franchise whole: Cartoonish, cheesy bad guys with Pinky and The Brain level ambitions for world domination. Over the top, physic and often gravity defying feats of large scale destruction and blood letting. And a cussier version of an old Roy Rogers exclamation that would become a catchphrase that would enter the pop culture universe and stick to the roof of its mouth like peanut butter.
The series of Die Hard films would, like the Dirty Harry series before it, experience the creative peaks and valleys typical of a franchise of films featuring the same character with a number of different writers and directors.
The truth is, one of the nice things about the Die Hard films thus far has been the relative high standard of entertainment quality the films have maintained, to varying degrees. The first three films were all big action, big concept affairs with good acting and decent plots, some humour thrown in there for good measure. The fourth wasn't a bad movie, it just felt more or less like what it was: a cash grab attempt at capitalizing on what was, up to that point, one of the most highly regarded action trilogies of all time.
And now we have a fifth Die Hard movie.

When the movie was announced, I remember there being quite a bit of excitement from movie magazines and online bloggers about what direction this new chapter would take. Would it harken back to the glory days of the series, continue on in the 'so over the top it makes the original Die Hard look restrained' vein that Live Free or Die Hard had opened up, or would it try something new?
Well, now that I've seen it I can safely say that it tries all of those things and succeeds at none. It's more like a bad Die Hard knock off than an actual Die Hard movie. Every Die Hard movie had its cheese, especially in the bad guy department, but they balance that with all the other great stuff they're packed with. This has all the cheese and almost none of the other stuff.
For one thing Bruce Willis looks bored stiff and you can almost see him staring off the set at the wall clock counting down the time in his head when the production will break for lunch. That just sucks for the viewer. I know without knowing that Willis is only in this movie for the payday. You pay that guy enough money, he'd play Tiddly-Wink in a Teletubbies movie. I doubt he even read the script or gave a crap who the director was, as soon as his agent said 'they'll pay you x-amount' he was in. So there's that.
Secondly, they've got him running around quipping and one-lining and making a fool of himself doing so. 'Okay Bruce, for this scene, I want you to pretend you're Bruce Willis in one of those Die Hard movies.' I mean, he's got more one-liners and cheesy quips in this movie than actual dialogue. It's ridiculous. How many times can they beat the line 'I'm on vacation' into the ground in less than two hours? Quite a few apparently.
Then you've got the plot, or rather, the absence of one. With almost no explanation or exposition, Bruce goes off to Moscow because his grown son is in a prison there (yes, apparently he calls going to see/break his son out of a Russian prison a vacation). With one thing leading to another, it turns out a maniacal Russian baddie wants to rule the world using weapons grade plutonium or some such substance, it doesn't really matter, and Bruce and son are thrown into the middle of it all and must save the day (world). Unique. With that plot and Willis yawning his way through the movie I can't understand why they didn't release the movie at the end of last year so it could be in the Oscar race.
Ok ok, so what about the real reason most of us go to see a Die Hard movie? Well, the action in this particular flick is definitely big, loud, and continuous. It starts soon after the movie does and stops just before the movie does. It's over the top, outrageous, completely unrealistic and makes a lot of things go boom. If that's all you're interested in seeing and can forgive a complete lack of merit in every other aspect of the movie, then go ahead and see it. You'll forget what happened at the beginning before you get to the end, but at least you got to see a helicopter explode in Bruce Willis' face without it hardly scratching him.