Running out of movies to tell stories 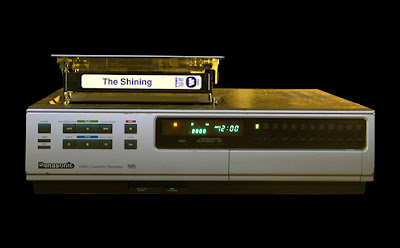 Sometimes a movie's just a movie. That's it. No subtext, no hidden meanings, no messages between the lines or puzzles to decode, nothing. Just mass market popcorn foddered entertainment. And sometimes it isn't. Sometimes it's a powerful and transformative experience that unravels itself with every subsequent hour you devote to it, hoping to unlock that thing which you can feel, which you know is there in the shadows of the frame but can't quite put your finger on. Can't draw out. The thing or things which sit under the guise of the narrative story taking place in front of you, maybe leading you to it, maybe drawing your attention from it. Maybe both, maybe neither.
This is the way I feel and have felt about every Stanley Kubrick film I've ever watched from The Killing (his third) to Eyes Wide Shut (his last). As much as I love his films and the stories they tell in the foreground, I know, I know that there's something there in the background, or in the in-between. That there's a puzzle he's carefully and delicately placed within the frames of the film for the eagle-eyed and the devoted. Like a chess move you don't see sneaking up on you until it's too late. Checkmate.

The makers of Room 237 obviously feel the same as they've put together an independently produced documentary that attempts to unravel the strings that hold Kubrick's seminal horror picture The Shining together and see what falls from the web.
I don't consider myself a highly intelligent individual and I tend to take most things at face value. I may suspect there's something more to what I'm seeing or hearing, but I'm rarely bothered enough initially to take the time to try and figure it out. As such, I miss a lot of subtext in the movies I watch. Usually when I sit down in front of a theatre screen, only two things occur to me throughout that picture: Is this a good movie and do I think I can hold it till the end without peeing my pants or damaging my kidneys. But, as I said, sometimes you watch a film and are left feeling like you've missed something, or like there's something there you're supposed to miss, and meant to go digging for. I felt that way about a film called The Master from last year, I feel that way about Chris Nolan's films and I feel that way about Kubrick's.

The Shining is my all time favourite horror film and one of my top ten favourite movies period. I've seen it more times than I can count, at least once a year since my mid teens, often more than that. I know every line of dialogue and every scene like I was there when it was filmed and as if it was filmed last week. But watching Room 237, I felt at times like they were talking about a movie I had never seen before. They spend an hour and forty minutes pointing things out about it you would think a person who's seen the film as many times as I have would've noticed or picked up on; typewriters changing colours, chairs disappearing, carpets reversing, architectural contradictions. Things that show either a great deal of continuity errors on Kubrick's part, or pieces of a puzzle being assembled behind the screen. Considering Kubrick's infamous perfectionism, acute attention to detail and unrivalled consensus as an all around genius, such glaring mistakes and inconsistencies just don't make sense.

Along with pointing out phantom furniture, the filmmakers also discuss the true meanings playing out and the commentary the film is making about certain significant cultural events. For example, they suggest that The Shining was Kubrick's way of telling a story about the holocaust. A subject he was fascinated with but felt was too heavy a load to carry around in his head and on his heart to make a feature film about. They also suggest that The Shining was Kubrick's way of telling the world that the Apollo 11 moon landing footage was shot, by him, on a soundstage in Hollywood. The filmmaker's don't suggest the moon landing didn't happen, just that the footage everyone was showed was faked. This is a popular conspiracy theory and one that Kubrick's name is often linked to. Room 237 says that there is evidence in The Shining that Kubrick uses to say 'yes I did it. I can't tell anyone about it, but I need to get this off my chest.'

To be honest, there were more times throughout the film that I said 'give me a break' than that I said 'that's amazing! I never thought of that before.' These guys dig so deep and use such broad concepts at times to fit with their theories that you can't help but feel that obsession creates its own kind of madness wherein you start to believe things are there that aren't. One example of this is one of the narrators saying that if you look closely you'll see Kubrick's face airbrushed into some clouds during the opening shot. Well, I look as closely as I could for no short amount of time and didn't see a damn thing. Someone else suggests that The Shining played forwards is essentially the same film as Kubrick's 2001: A Space Odyssey played backwards. Or vise-versa. Huh? Or that a poster of a guy skiing is actually a minotaur. And so is another picture of a guy riding a horse and so is Jack Nicholson when his face distorts a certain way. I mean come on. The phrase 'too much time on your hands' passed through my mind in regards to these people many times while watching this movie.

I said this in a review I did on The Shining last halloween and stick by it: People will continue to watch, study, and discover new things hidden in the films of Stanley Kubrick for as long as there are people here to do so. He was a genius beyond compare and as they point out in Room 237, for someone of Kubrick's intelligence to just make a movie would be far too boring. The only way he had of quenching his thirst for intellectual stimulation, aside from ongoing chess battles with cast and crew between takes, was to make films that uncover something new every time you watch them. Films that are more than films. More than mass market popcorn foddered entertainment. Films with secrets in the shadows of the frame, hidden just out of sight but not out of reach. Films for dorks like me and the guys that made this documentary, with too much time on our hands. Those are the films of Stanley Kubrick.

Verdict:
Fascinating, if at times far reaching, documentary that will, if nothing else, ensure you will never watch The Shining in quite the same way again.