"Maybe tomorrow we'll all wear 42, that way they won't be able to tell us apart" 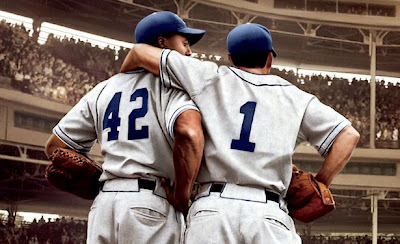 There's a dichotomy that exists within me in regards to the historical firsts of African Americans. On the one hand, I love that there were those who had the bravery, the will and the strength to do what must have been hard and often times abusive in order to advance this world in a positive, more accepting direction. And those people deserve to be celebrated and admired. On the other, its a sad fact of American history that such a big deal had to be made in the first place. That these people weren't accepted based solely on their talents and what they were forced to endure in order to express those abilities with fellow professionals. I know we live in a different world now and racism is almost universally frowned upon, but stories of struggle like Jackie Robinson's and so many others, fill me with confusion as much as disgust.

But history is what it is and one of the positives that we can take away from all of it is how far we've come. Another positive is what great potential such stories have given to the medium of moving picture shows.
'42' is not the first film to tell Jackie's story. Jackie played himself in 1950's 'The Jackie Robinson Story', just a few short years after his Major League debut. There have also been a number of TV movies and an HBO special. But '42' may well go down as the definitive account of his struggles and triumphs in the early part of his career.

Rather than tell a life story, the film focuses instead on Jackie being invited to try out for the Montreal Royals, the top farm team in the 40's of the Brooklyn Dodgers, then one of the best teams in the league. After Robinson wows with his considerable skill with the Royals, he is invited to make history, signing with the Dodgers ball club, becoming the first African American pro baseball player. 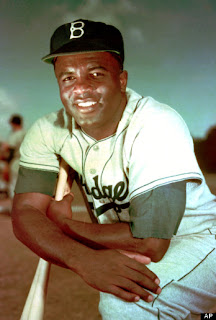 By 1947, much of the United States had adopted a more accepting stance on the African American population and it was really only the southern states that still practiced segregation and expressed openly racist views. Still, a black man playing Major League Baseball was a shock for everyone and Robinson had a considerable hill to climb before he was accepted not only by the general baseball public, but by many of his own teammates, who initially signed a petition against playing with him. Signed and mentored by Dodgers executive Branch Rickey, who advises the young player not to fight back at mistreatment, Robinson holds his ground and plays his game and leads the Dodgers to the pennant his first year on the team. 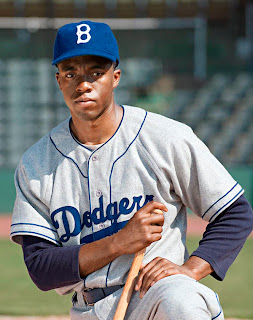 '42' is written and directed by Brian Helgeland. A versatile filmmaker who has directed movies in many different genres from gritty crime films ('Payback') to supernatural thrillers ('The Order') to action comedies ('A Knight's Tale'). He also wrote the scripts for 'Mystic River', 'Robin Hood' (the 2010 version) and 'L.A. Confidential' (for which he won an Oscar), among many others.  He unfolds the story of '42' without a great deal of pizazz or surprises, keeping the story simple and the dialogue obvious. And while I wouldn't call the camerawork flashy, there are a few nice touches in his representation of the game: a player slamming into the first base bag, an explosion of dirt and dust covering the screen and snuffing out the light; the camera following feet chewing up the gravel between bases; a catcher's eye view of the ball zipping across the plate with such force you could swear you felt the wind from it on your face.

If you've seen a sports film involving racial issues, and there are many, you'll know what to expect with this one. It's well made and well told, usually interesting but occasionally slow with great performances and tear jerking moments that cause a swelling of pride, particularly in the images and words that lead into the end credits.

I've always loved baseball movies, which is interesting because I've never loved baseball itself. I find the game boring to watch and almost as tedious to play, but since my very first viewing of 'Rookie of the Year' back in '93, I've yet to see a ball flick I dislike.
Underdog sports movies are often more a nuisance than a pleasure, and usually redundant. '42' however, is a movie that not only provides two hours of quality entertainment, but an important historical story that should be seen by everyone, sports fan or not, as an example of what the strength and courage of just one man can do for an entire nation. Or you can just go to Wikipedia, but then you don't get that delicious movie theatre popcorn.

Verdict:
An important story, a well made film. Not as engaging as Moneyball, but a cut above many of the films that populate the great ocean that is the underdog sports movie.