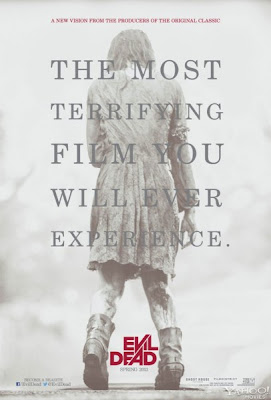 You know when you're walking along, minding your own business and suddenly you feel a squish beneath your feet and hear a tiny splat or a crunch and you look down and among the yellow goo and blood you realize you just stepped on a big, fat bug and a shiver goes down your spine? Watching Evil Dead is like that. Like having that eww, yuck response stimulated over and over again.
The poster for the movie boldly proclaims, perhaps with a little tongue tickling a little cheek, that this will be the most terrifying film you will ever experience. A bold statement and indeed a completely inaccurate one, unless you equate cinematic blood and gore with fear, because this is, bar none, the bloodiest movie I have ever seen. It's hard to back this up with examples without adding a parental advisory to the review, but let's just say that if seeing people mutilate themselves, dismember others with a variety of rusty tools, and being drenched in a down-pouring of blood from the sky appeals to you, you're going to love Evil Dead.

Sam Raimi's The Evil Dead came out in 1981 and almost immediately became a cult classic. It was made for pennies by Raimi and a bunch of his buddies and although it only made just over $2 million in theatres, that was eight times its budget.
The Evil Dead was a 'splatter' horror, one of the goriest films of all time at the time of its release. It received an X rating when it came out on video, a rating usually only reserved for pornographic materials, and was labelled 'video nasty' which means unrelenting buckets of graphic and gory violence with little or no redeeming value. Straight gratuity for gratuity's sake. Raimi followed it with The Evil Dead 2, basically a remake of the first film but with more graphic and inventive gore and a bigger budget for special effects. Army of Darkness followed, the cheesy, hilarious, time travelling series finale.
These films are widely regarded as some of the best splatter flicks of all time and have been firmly entrenched in the vocabulary of pop culture for decades.

Raimi, along with Bruce Campbell, the charismatic lead in the original 'Dead' series and the producer of those films, Robert G. Tapert, produced this new film as a reboot of the series and handed the reins over to a man named Fede Alvarez, a filmmaker from Uruguay who made a short film about roots attacking a city that became a viral video on YouTube.

The main difference between the original Evil Dead and this one is that the original film was played for laughs as much as scares. Yes, it was gory and yes it was creepy in parts, but it was also silly, with the acting as animated as the effects. In this reboot, they're playing it straight, attempting to anyway. Oh sure there are parts that are so over the top bloody and gory that you'll find yourself laughing at the sheer extent of it all, more a 'I can't believe what I'm seeing' chuckle than a 'that was so silly' chuckle. But it's obvious the filmmakers are attempting to scare, disturb and unsettle you. And while I didn't find the movie scary, I did find it disturbing and unsettling at times.

I'm really not a fan of 'torture porn.' 'Torture porn,' for those that don't know, is the charming subtitle given to horror films that exist to be as gory, bloody and sickening as they possibly can, often through vivid representations of the torture and mutilation of their lead and supporting characters. For a while, these movies were all the rage. Teens and adults with a taste for blood up on the screen got their fill and more with movies like the Saw and Hostel series and the many, many of their imitators attempting to cash in on their success.
As with sex, profanity, substance abuse, or any other unsavoury vice, I'm fine with a movie being bloody or gory if it's in the service of a good story. But blood for the sake of blood is ridiculous and movies that exist only to shock and disturb are a waste of time.
Which brings me back to Evil Dead:
Why remake a cult classic? Well, the obvious answer would be money. The original movies have attained a huge audience over the years, so that audience will probably come flocking to this one, if only to complain about how it sullies the name and reputation of the original. And indeed, at the time of writing, Evil Dead has made $21 million and change, is the #1 movie (for the weekend) in the States and Canada and it's not even Monday yet. That being said, we're just exiting the most boring and artistically vacant period in moviegoing of the year, so its competition is sparse, but $21 million is pretty good for two days.
The other reason could be that the producers wanted a chance at rekindling the original controversy and attention of the original by attempting to out-gore the other horror pictures of the day. That's a big job. It takes a lot to shock the desensitized horror buff audiences of 2013, but Evil Dead gives it a valiant effort.

I'm not a huge fan of the original series. They're fun in their way and I always love seeing people make do with such little money, being forced to use their imaginations to create effects organically rather than punching some code into computers, but I'm even less a fan of this reboot. The gore is gorier, the blood is bloodier and the deaths are at times more inventive, but at its core, Evil Dead is just another torture porn. The script is weak, bland and obvious. The acting is flat and the story is full of holes, holes the filmmakers were happy to fill with bucket of blood.

Maybe for the sequel there will more attention paid to the story.
I wouldn't hold your breath though, your head might explode. Which would, ironically, be entirely appropriate.

Verdict:
Gore hounds will have lots of fun, but those looking for an interesting story, decent acting or dialogue that doesn't sound like it was lifted from 'The Littlest Hobo' will not.