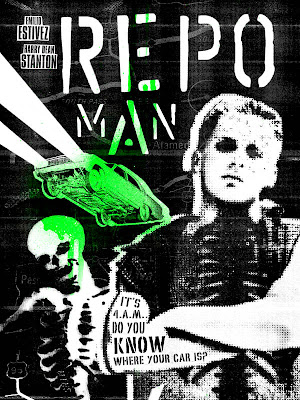 Repo Man came out the year I was born. As a matter of fact, I was six weeks old when it hit the theatres, both dumbfounding and enthralling the moviegoing masses.
Even today, it's a weird movie. A B-movie through and through with more than its fair share of Corman-esque ideas and sequences, it's the kind of movie that, for lovers of cheesy sci-fi, wacky movies, or 80's era punk rock, you feel like the movie was made just for you.
'Happy birthday Johnny, here's your movie.'

Emilio Estevez, then best known as the son of film legend Martin Sheen, now best known as the brother of film and television freak show Charlie Sheen, had only done a few little things on TV shows up to that point and his role in Repo Man is a perfect introduction to his film career. He embodies the role of an angry, bored, twenty-something punker with conviction and realism. Actually, given the great deal of cheese that pervades the film, the acting all around is really quite good.

Repo Man is the first film from filmmaking gonzo Alex Cox and points not only to where his career would take him but to his unique and at times otherworldly style of films, not only in story but in how the stories are told. From Repo Man he would go on to make the definitive account of the 1970's infamous punk darlings Sid Vicious and Nancy Spungen with Sid & Nancy. Later he would make the film Straight To Hell with Joe Strummer of the The Clash and Shane Macgowan of The Pogues in cast. Cox is a kind of folk hero to the punk community, spinning yarns that appeal to the antiauthoritarian views and specific musical tastes of the movement.
Repo Man's soundtrack in particular is a well regarded punk classic with many of the era's best bands contributing songs and providing a rapid thumping heart beat to the events that unfold on the screen.

Repo men have more or less gone the way of the Dodo by 2013, at the very least they no longer operate in the manner they did in the mid 80's. Basically car thieves who would often risk their personal safety for paltry paycheques at the behest of big corporations who want their stuff back. In other words, a perfect job for a punk.
This background occupation provides lots of zany adventures for the film in of itself, but added to it is the mysterious contents located in the trunk of a Chevy Malibu, contents which have the ability to turn a car a glowing green or evaporate people should their curiosity lead them to inquire upon its contents.

Repo Man is a movie for a certain fanbase for sure, it's a bonafide cult classic, which means there's a great deal of dedicated fans out there, but the general population would probably hate it. As it is it works on many levels as an entertaining, well written and well made (considering the budget) movie with a silly premise and a hell of a soundtrack about punk rockers, repo men and aliens. So a Nicolas Sparks movie, in other words.