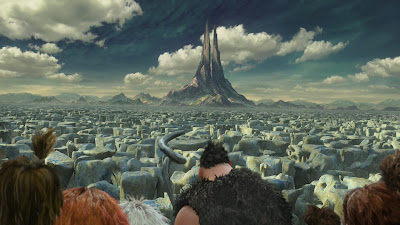 When you think about it, the caveman years provide a wonderful cinematic canvas for exploration and invention, allowing a filmmakers' imagination to run wild with what may or may not have existed millions of years ago. And without the ability of any human being on earth thus far to say for certain what threads the big E was rocking way back when, you could pretty much put anything in a film that takes place that long ago and the audience will buy the possibility that it did, or could have, existed in such a form at that particular time. This makes animation, with it's lack of technical boundaries in what it chooses to portray on screen, as well as the photo realistic capabilities of computer graphics in 2013, the prime candidate to realize such a place in the language of the moving picture. And it is just this ability and imagination, fully realized, that makes The Croods such an enjoyable and impressive little family film.

The Croods takes place somewhere near the end of the dino age. Many of the resident cave families have been wiped out. But The Croods carry on, their secret to longevity involving going days on end sealed inside a cave, hidden from the sun, safe from dinosaurs, inclement weather and deadly mosquito bites. This rubs the teenaged Eep the wrong way. She longs to go out and explore and her restlessness and curiosity get her into trouble one night when, investigating a strange light, she bumps into a new face. This new face, the appropriately unimaginatively named Guy, warns the end of the world is near and the only chance The Croods have for survival is to follow him to the sun, which he believes they can ride to freedom. Along the way, they pass through a beautiful, technicolor jungle, across a desert terrain and over crumbling mountaintops.

The themes present in any family film you're likely to waltz into are all here and anchor the story; the frustrations associated with growing up, the friction that causes between a kid and their parents, the hard headedness of both parties, a distancing and finally, amid turmoil or perhaps because of it, acceptance, growth and mutual understanding. The message, not unlike The Flintstones, seems to be: these are things that have been going on in families for millions of years.

But the story and its message are the lesser elements of the movie. The real shining occurs in the visual representation. This movie is just plain gorgeous. When the family and Guy set off on their adventure, every frame of the film fills with such imagination and visual splendour, you halfway stop even paying attention to the story in order to marvel at it all. Luckily though, this isn't a movie you'd need to watch with subtitles to ensure you don't miss a line and get left behind.
It's also a good deal more intense than I would've guessed going in. There's a palpable sense of dread that follows the film, nipping at its heels in the form of earthquakes (big and small), changing weather patterns and other subtle and not-so-subtle intensities. In fact, there were scenes toward the end involving aforementioned crumbling mountains caused by earthquakes that looked so rich and realistic, I don't remember seeing such awe-striking and even frightening sights in family animation before.

Another thing the movie did a great job with was the casting. Say what you will about the oddness of Nicolas Cage and his dodgy resume, he is the perfect choice for a simplistic cave man with daddy-daughter issues. Ditto Emma Stone, who I've never been a fan of, but who does a great job as Eep. And Ryan Reynolds does good as well as the good natured foil/love interested to Cage's Grug and Stone's Eep, respectively.

The Croods is a movie that is geared towards kids and it wisely maintains that by never really aiming over their heads at the parental units seated beside them. It's goofy, slapstick, easy to follow and keeps the jokes clean and lowbrow. No it's not Pixar, no it's not Shrek. It isn't trying to be, it's Dreamworks. A company part owned by the biggest, most powerful kid in Hollywood, Steven Spielberg. And this is something I know he greenlit because he knew his kids would love it. I know mine did, almost as much as me.

Verdict:
An impressive visual spectacle, a healthy dose of kid-oriented slapstick, a relatable story and great voice acting. It won't appeal to parents as much as their kids, but this one's not supposed to, this one's strictly for the young (and the young at heart).