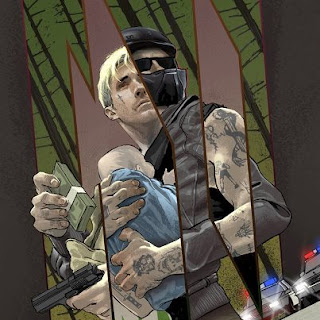 Off the cuff, The Place Beyond The Pines plays a lot like Drive. Both movies feature Gosling as a quiet outlaw with above average driving skills who's prone to bursts of sudden violence. They also both feature Gosling as a man who attempts something dangerous and highly illegal for the only people he in has to care for in his life. Even the Bryan Cranston character in Drive is pretty much the same as the Ben Mendelsohn character in this.
But that only lasts for about a third of the movie before Pines veers sharply off that road and onto another, leaving all traces of familiarity with Gosling's 2011 masterpiece in the rearview.

The Place Beyond The Pines is an ambitious picture. It tells a story that spans decades, involves many characters and switches narratives a number of times.
Derek Cianfrance, the film's director, was last seen helming the good ship Blue Valentine, a much smaller but in some ways no less ambitiously realized picture.
Here, he sticks with the same aesthetic, melding a documentary-like visual sense with gritty storytelling and realistic performances. In fact, this makeup is so effective in Pines, it leaves you with a sickly feeling in your stomach when it looks like the story is headed for tragedy or violence, which it often does. This uncomfortable effect is intended I think and it means the movie works, but it can make watching the film unpleasant at times.

One thing I loved about this film was the sheer unpredictability of the narrative. I went in thinking I was going to see a certain kind of movie, realized halfway through I was thrown for a loop and was surprised by the final third to thrown again, having no idea what was going to happen next. The story isn't without cliches though and while I found most of the sprawling narrative to hit its mark, there were times when you could tell concessions had to be made in order to move the story in a certain direction by a certain point. It would be hard in a story like this not to have to do so once or twice.

One could safely describe Ryan Gosling as being on fire right now. He's that rare breed of actor who, with very few exceptions, has followed in the carefully chosen steps of Leonardo DiCaprio, achieving huge commercial and critical success without having to resort to an endless parade of cardboard cutout rom-coms or redundant gross-out comedies. He chooses his films carefully, usually settling on hard edged, violent pictures with difficult subject matter. Yes, I know he was in Crazy, Stupid, Love and The Notebook, but even DiCaprio hasn't been above the odd schmaltz.
He's fantastic in Pines. As I mentioned, his character isn't totally removed from his 'man with no name' in Drive, but they're enough apart in personality to avoid accusations of self-plagiarism.

Eva Mendes is great too, playing a women who's been put through the ringer, and looks it. She plays one of those characters, all too real, whose lives deliver one stressful, trying turn of events after another. It's not a role with much variety, but it isn't meant to be.
Ray Liotta is back on the screen playing, surprise surprise, a greasy, crooked douche bag. He's made a career for himself in these roles and while it'd be nice to see him try something different every once in a while, what he does, he does well.
Ben Mendelsohn is fantastic as usual, as are Emory Cohen and rising star Dane Dehaan as the sons forced to carry the weight of the decisions of their fathers.

The Place Beyond The Pines isn't for everyone. It isn't very violent, but when it is, it's disturbing. It isn't as fast paced as I thought it would be, but it has its moments. What it is though, as was Blue Valentine, is a long, deep, almost too realistic telling of a series of events that shape, in pain and anger, the lives of a handful of people in a small town.
If that sounds appealing, you'll find a lot to dig into and to think about, if not, well, Oz should still be playing right across the hall there.

Verdict:
An ambitious, gritty movie involving multiple narratives and sad stories told with uber-realism. Fans of Blue Valentine should seek it out.