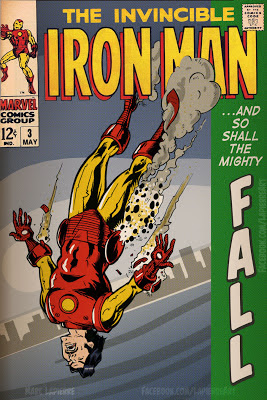 The Iron Man movies have always been an easier pill to swallow than most of the other Marvel super friends. The reason being that Stark, like Bruce Wayne, uses his Scrooge McDuck-like bottomless wealth and A-student smarts to create a scourge of those who would do wrong from organic, though highly unique, materials, rather than, say, being born a god in a far off universe or biochemically transformed into a hulking mass of super-strength with an anger problem.
I never grew up reading comics, never had an urge to and therefore am less accepting of super-powered gods and aliens and tend to become more involved in the plots concerning the average joe. Albeit the billionaire, genius average joe.
Another aspect that works in Iron Man's favour is the special effects that bring him to life. Computer generated effects take leaps and bounds every single year as the genius' behind companies like ILM and Digital Domain invent ways to make the effects we see on screen look that much more photorealistic with every release.
From the first movie five years ago, there wasn't an aspect of Iron Man that I didn't buy or thought looked fake. I remember marvelling (no pun intended) at how smoothly the effects blended in with the live action on the screen even back then. Iron Man 3 continues this high level of effects quality, capping, in three proper releases and an ensemble, some of the best effects I've seen come out of the comic book movie pantheon thus far.

But enough of that boring technical crap. Sure, the movie looks nice, but is it any good? In simplest terms, yes, it's very good. If you liked the first two, you'll like this one. If you liked the first two, but hated Avengers, you'll like this one. If you hated the first two but loved Avengers, you have weird taste, but you still may like this one. Why? For one thing, it's witty. It's wittier than the other Iron Men and that can be attributed to new series writer/director Shane (Lethal Weapon) Black. A talented filmmaker who's made a career for himself making movies featuring wise cracking characters embroiling themselves in grand action set pieces. He previously directed Robert Downey Jr. in the very cool caper flick Kiss Kiss Bang Bang and brings some fresh humour to the franchise, while keeping all the action cranked up to ten.

As you'll have seen in the preview, which shows snippets of pretty much every cool set piece the movie has to offer, Iron Man gets put through the ringer here. And while the absence of his actual death means he doesn't have it quite as bad as he did in The Avengers, he is, for the first time, saddled with a foe that he can't fight with gadgets or expensive toys, a battle at the emotional and mental level as events from The Avengers have given him some Post Traumatic Stress and Panic Disorder, resulting in panic attacks and nervousness very much out of the ordinary for this particular character.
I personally think this is a brilliant aspect of the narrative as not only is it relatable to the audience (40 million people in American alone currently suffer from one or more anxiety disorders) but it reveals a level of humanity that ties in to the believability I was mentioning earlier. Who the heck wouldn't have anxiety and Post Traumatic Stress after going through what Stark went through in Avengers?
It's something that Nolan touched on in his trilogy, that Raimi attempted to portray in a couple of the Spider-Man movies, and that we've seen in Stark himself in lesser degrees in previous entries: the venerability of the hero. It's an attractive aspect because it shows that ordinary men who do extraordinary things are still just ordinary men.

This isn't Sophie's Choice though and Stark does have a formidable foe to encounter and defeat in the Mandarine (no relation to the fruit) who is a terrorist hell bent on, yes, terrorizing. He's played with equal parts gusto and invention by the incomparable Ben Kingsley, who is never boring to watch and always brings something new to every performance he gives. Which is impressive for a man with over a hundred TV and movie roles under his Knighted belt.
Guy Pearce plays another character of questionable morals who has an axe to grind with Stark when, years ago, Stark set up an impromptu meeting with him and then stood him up.
And then, to add a little Days of Our Lives to the mix, a girl with whom Stark had a one night stand years ago, shows up out of the blue with unclear motives.

But if you come to Iron Man for the action and aren't interested in emotional disorders or old girlfriends, you've still come to the right place. Whether rescuing a dozen people out of thin air who have just been thrown from an airplane, or fighting bad guys whose injuries heal themselves with a whole cornucopia of Iron Man suits programmed to fight without anyone inside them, Black isn't thrifty with the action in this film and it is always appropriately abusive to the senses. I didn't see the movie in 3D, but I imagine the effect would be amplified in such conditions.

I won't say why of course, but Iron Man 3 ends, quite nicely, in a way that suggests, quite strongly, that this franchise has come to a close. Of course this is Hollywood, this is a comic book movie and the record breaking $175 million weekend it just had all suggest that the end is never really the end if it means another few hundred mil in the pockets of the studio heads.
But I'm an optimist when it comes to movies and for now I'm going to, naively, believe that this really is the end of the solid Iron Man trilogy. And contented that it has gone out on a high note. At least until they reboot it in 2015.

Verdict:
Featuring everything that made Iron Man Iron Man previously, and adding some wit and humour, Iron Man 3 is just as good as the last two and better than Thor 2, Captain America 2 and Iron Man 4. I don't know, call it a hunch.