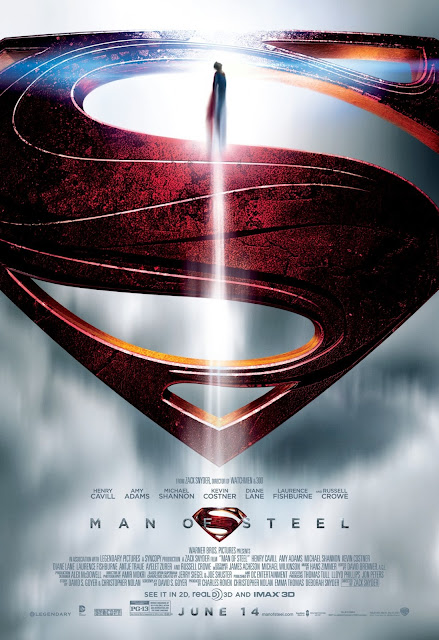 I never fully appreciated the operatic storytelling behind the world's most popular and beloved superhero before this film. I mean, in some ways this is the kind of story Shakespeare may have told, had he been alive a few hundred years later:

A pod crashes to earth, cradling a child within its hull. A simple farmer and his wife discover it and raise the child as their own. As the child grows he changes, develops in ways that reveal to all three of them that he's different than other kids, than other humans. He has super strength, super speed, the ability to see through walls, to see through anything. There's a wonderful and touching scene in Man Of Steel of young Clark Kent when his super-senses begin to take hold. They gang up on him, flooding him, causing him to feel as if his head might explode. A car horn blocks away sounds like a cannon blast in his ears, his classmates and teacher look like masses of skeletal framework, blood and tissue and organs. That would freak anyone out, it doesn't matter what planet you're from.
As the boy grows and the other kids notice his difference, they pick on him. They taunt him and push him around. By now he knows that he could flick a finger and take the bullies head off his shoulders. But he doesn't. He takes it, absorbs the abuse, the emotional abuse, the only kind that hurts. This is another wonderful aspect of the storytelling and a powerful lesson to kids (and adults) watching the film. It's as important to teach the victims of bullying how to react as it is to teach the bullies not to bully in the first place. Not by being a doormat, but by being an example of strength of character. By being the bigger person. This theme runs throughout Man Of Steel and works on many levels.
As the boy grows into a man, with his senses under control, he begins to wonder where he came from, what brought him here and why he is the way he is. With the help of a tenacious reporter he discovers a place buried in deep, ancient ice that may have the answers he's looking for. Amy Adams plays the reporter, Lois Lane. I'm not a fan of Adams, never have been, her acting kind of irks me, but she's great in this. Spunky, driven. Strong when she needs to be, a damsel in distress when she needs to be. A good performance.
As Clark begins to get used to himself and the veil begins to lift on questions about his past, a global terrorist hijacks the airwaves and announces to Earth that he will destroy our world if we do not give up a 'fugitive' from his planet, hiding out on this one, known as Kal-El. He tells us this man will look the same, but have superior abilities.
He gives us twenty-four hours to give Kal-El up. Kent knows what he must do. Surrender, or fight.

In many ways, Man Of Steel is the movie everyone wished Prometheus was going to be.
There's a barnstorming, sensory saturating opening sequence on the planet Krypton that is made up almost entirely of special effects and ends with a planet exploding and a small pod rocketing through the stars and galaxies for the planet that sits in perfect distance from its sun, one of the few that can support life, however fragile the life on that planet may be.
As soon as General Zod reaches Earth and demands Kal-El (Clark Kent) be turned over to him, the movie kicks into high gear, busting at its edges with flawless and impressive special effects, intense battles and citywide destruction on a scale that would make Roland Emmerich blush. All of it bolstered by a crashing, thundering, sweeping Hans Zimmer score which comprises one of the best, if not the best movie soundtrack I've ever heard.
Zod is played by Michael Shannon. Shannon is an amazing actor, he always has been. I personally like him better in more intimate, independent fare, where his wonderful expressions say more than growling out threats and intimidation ever could. But he's good as Zod and I'm glad his career has afforded him the chance to do something on this scale, even if it means his realization that big scale popcorn-ers aren't for him.

I've said this in every review I've written about a comic book adaptation and I'll say it again; I've never read comics. I've never read a single comic all the way through.
Comic books have never interested me. If I'm going to look at pages of people doing extraordinary things in colourful pictures and speaking through bubbles, I'd prefer if those pictures were moving and those bubbles were actual people speaking. Comic books don't make sense to me. Why read a comic when you can watch a movie? Especially in 2013, when computers have made it possible for movies to do anything an artist can portray in a comic book.
All that to say that I can't rate Man Of Steel in comparison to how true the filmmakers remained to the history and origin of the character of Superman in past literature.
And as far as the previous movies? I did watch the original Superman from 1978 (barely) and when the credits rolled on one of the worst movies I've ever seen, I just didn't have the stamina to go any further in the series (though apparently Superman 2 has a scene where Christopher Reeve pulls saran wrap off his chest and throws it at a bad guy, to no effect. So I guess I missed out there).
So I can rate Man Of Steel only on its own merits and on its own merits, it's an amazing movie. One of those movies that pulls you into it and refuses to let go, refuses to let your attention waver. Unless you see the movie with a five year old, as I did, who informs you halfway through and during the discussion of an important plot point that if you don't take him to pee right now he's going to pee all over the seat.

Man Of Steel delivers on the excitement it's been generating for over a year now.
It has and will continue to break records, as it should, but the amount of money a movie makes doesn't necessarily mean it's a movie worth seeing. A movie worth seeing is one that lifts and excites. That frightens and causes spikes in blood pressure. That moves the heart and stirs the soul. One that punishes the eyes and ears with special effects driven sensory overload (but in a good way). A movie worth seeing is a movie like Man Of Steel, which does all of those things. And does them in 3D.

Verdict:
Henry Cavill plays Clark Kent. Though a perfect physical specimen to play the man of steel, Cavill is a better actor in smaller screen roles than a bigger one like this. Contrarily, Man of Steel is a perfect big screen movie. It won't translate as well to smaller screens, so see it on the big screen, the biggest screen you can find. It's everything you wanted this movie to be.