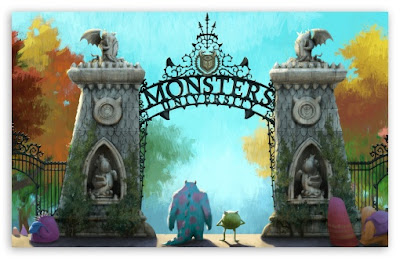 When last we saw Scully, Mike and the gang, Monstropolis had been turned on its head with the revelation that laughter is a more powerful source of energy than screams.
This idea set the franchise up for some interesting avenues to take for the inevitable sequel that would follow. Instead, the Pixar team of thinking heads decided that they hadn't culled enough milage from the scare factor aspect of the series and went back in monster time to a place called Monsters University. Where monsters learn how to be, monsters.

After having an encounter on the scare floor at Monsters, Inc. as a small..thing, little Mike's life course was set in motion to one goal: being the best scarer in the history of scaring.
Enrolling years later at M.U. and majoring in scaring, Mike meets Sully, who has natural scaring ability but could care less about the book aspect of the course, the aspect which Mike excels at. Really, the only aspect which Mike excels at.
The two initially hate each other, but fate brings them together by forcing them to work as a team to compete in the school's scare games.
There's much more to the plot, but those are the basic beats.

Monsters, Inc. was an ingenious idea and is to this day one of Pixar's best movies. To say it would be a hard act to follow would be an understatement, but I have to hand it to Pixar, Monsters University is a worthy successor.
With as many new characters as returning ones, a script that has that special Pixar balance of humour, emotion, invention and adventure and voice work that's so good you buy that Sully's Sully and not John Goodman (no easy feat).

And special mention has to be made on the visual canvas these animation whiz kids are painting on. I think I say this just about every time a new Pixar is released, but this movie is one of the most gorgeous, eye popping animated films I've ever seen.
With Monsters University, Pixar animation has officially become fully photo realistic. Yes, the characters still look animated and fake, they're supposed to. But the sets, the backgrounds, the props..except for the vibrancy of the colour scheme, it truly looks like they shot everything on real sets and just animated the characters into them.
It's impressive and a great complement to the strength of the story that you don't spend the whole movie admiring the animation and missing important plot points.

There have been many university set films and comedies and my only criticism with Monsters University is that it tends to borrow a little heavily from them.
I don't mean there's a scene in the film where Sully pulls a John Belushi and turns his face into a giant exploding pimple. But the settling in, the rivalries, the campus show downs between frat houses..I know these are all part and parcel of university life for many students in the real world, but the way much of it is portrayed in this movie feels overly familiar at times.

But that certainly won't bother the younger viewers (or many of the old ones) and the bottom line on Monsters University is that it's a fun, funny, touching introduction to one of the best films in the Pixar cannon.

Verdict: Great story, great idea, great voice acting, standard setting animation and visuals. Who cares if it's not Pixar's best film? It's got everything we go to these movies to see.