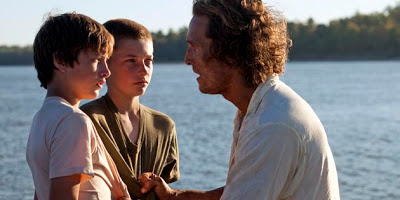 Mud is the third film from Southern born and bred filmmaker Jeff Nichols.
Nichols is on a roll, that's all there is to it. His previous two films, family revenge drama Shotgun Stories and paranoid anxiety thriller of the mind, Take Shelter, are both strongly told, simply filmed, heavily dramatic movies that, like Mud, not only evoke the time and place in which they are set, but use that place as an atmospheric supporting character in the stories themselves.

That place is Arkansas, and in Mud it provides the backdrop for a story about two young boys who come across a fugitive hiding out on a small island in a swamp. They befriend the man, develop a bond with him and help him in his preparations to move on to the next leg of his escape from justice.

And that's about it. Simple in premise, as are all of Nichols' films, but the heart that beats beneath the surface of the skin of this particular tale uncovers a more involving, and more revealing, story about friendship, danger and the maturity that finds you as you pass from adolescence into adulthood. A transformation which can occur at any age and is ignited and governed by the experiences of one's life.

McConaughey, burning brightly through a streak he hasn't experienced, well, ever in his career, is great as the fugitive Mud. McConaughey has mentioned in interviews that he's drawn to the swamps of the Southland. He grew up in and around them and this comes through whenever he does a movie in one. He may have a big expensive house in Beverly Hills and flashy cars, but you get the sense that he looks more out of the place amongst the superficial shine of Sunset Blvd than he does in the bug filled marshes of Arkansas and West Texas.
He's great in this because he feels real, he's not playing some tanned, chuckling specimen of female desire. And while he does find reason to take his shirt off in Mud, you forgive him for it, even though the reason he does it still doesn't entirely make sense.

More impressive than McConaughey though are his pint sized costars:
Ty Sheridan, a relative newcomer, was last seen, and impressively so, in Tree of Life.
Here he plays Ellis. Ellis is a child in transition and beginning to deal with the harsh realities of parents who are separating and living on a houseboat which is about to be torn down by the government as a result. He's on the cusp of his simple existence becoming something else altogether and his life is in prime need for a father figure. If you didn't know it already, you'd swear this story was scripted.
A funny side note to Ty's career, his next movie coming out is a movie called Joe with Nicolas Cage. Here is the short synopsis from IMDB: An ex-con, who is the unlikeliest of role models, meets a 15-year-old boy and is faced with the choice of redemption or ruin.
Haha. Sound familiar? Good ideas in Hollywood always come in two's. Or three's. Or franchises if the money starts rolling in.

The other boy is played by Jacob Lofland. Jacob has done, literally, nothing. Mud is his first role and while not quite as strong or naturalistic as Sheridan, he's impressive as well. Less time is spent on the backstory of his character, but what we do know is his parents are gone and he is being raised by his uncle, played by Michael Shannon.

When Michael Shannon starred in Nichols' first film, Shotgun Stories, he was a relative unknown. By the time Take Shelter came out a few years later, he had made waves with his role in Revolutionary Road and was on his way up. Now, he's a big star, having recently dropped as the baddie in one of the biggest movies of the year, Man of Steel. He's good in this and I hope, regardless of the heights his career may reach, he will continue to work with filmmakers like Nichols and in interesting independents like this one.

Mud is well told but definitely has its flaws. There are plot turns which are overly obvious and the ending drags on a bit. There's also a character, played by Sam Shepard, who I haven't made my mind up about and a group of gangsters which are underdeveloped and feel more like filler than necessity. Atheistically it feels a lot like Benh Zeitlin's breakout fairytale drama Beasts of the Southern Wild and unfolds in a similar fashion. It won't gain a lot of attention in cinema's but should gain momentum later in the year and will probably pop up again in the fall when the Oscar considerations start revving up. Until then it will be something you'll have to seek out based solely on my recommendation. And what higher praise can a movie receive than that?

Verdict:
Another strong release in Jeff Nichols' film cannon. Not quite as powerful as Take Shelter, at times a little contrived, but a well told story with strong performances and an authentic atmosphere.