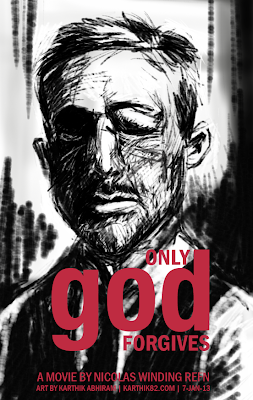 Alejandro Jodorowsky was a filmmaker who operated with greatest success (cult success, anyway) during the 70's and 80's. He made a number of diverse movies, but none to match the acclaim and infamy of his film El Topo. A mind-bending, convention-busting, hallucinatory and very violent film, El Topo is a story of a gunslinger in the desert who gets up to all sorts of depraved and flat out nonsensical trouble while he searches for someone (something?)
El Topo has a lot of fans out there. I'm not one of them. The narrative is confusing, the story is like taking acid and trying to watch a Sergio Leone film and the visuals, while at times inspired, often exist solely for shock value than in service to the story (or lack thereof).

Nicolas Winding Refn's new film Only God Forgives is dedicated to Jodorowsky. By the time the movie comes to a close and the dedication comes up, if you're familiar with Jodorowsky, you'll no doubt say to yourself 'of course it is.'
Only God Forgives owes a great debt to Jodorowsky's work. In some ways it's told straight, but it doesn't follow a conventional narrative style, it's gratuitously violent and exists in a kind of hellscape.
Perhaps with these cinematic ambitions in place, script and dialogue become disposable and unimportant. Maybe that explains why this film is filled to the brim with horrible writing.

One of Drive's (Refn's last film) strengths is its minimalism in the dialogue. People just don't say much in that movie. So if the script was poor, there weren't enough words for you to have a chance to notice. Albert Brooks has a couple monologues but Albert Brooks could sell tuna to the sea. Also, Drive was written by the Oscar nominated Hossein Amini and this was written by Refn himself. His hand may not be as deft as Amini's.

The greatest example of poor writing in this film is in the character of Crystal Thompson, Ryan Gosling's character's mother.
The mother, played by Kristen Scott Thomas, is an over the top cartoon character, spitting venomous insults and made up to look as ugly as she sounds. The character's so over the top in fact that she becomes cheesy and ineffective as a result.
If Refn wants to know how to write a terrifying lady Godfather mother character, he need look no further than Jacki Weaver's flawless portrayal of Janine 'Smurf' Cody in 2010's Aussie crime masterpiece Animal Kingdom.
Julien Thompson, the character Gosling plays, isn't a world away from the character he played in Drive. Quiet, withdrawn, alone. But prone to shocking acts of violence if pushed in the right direction. Only instead of the palm lined streets and beachfronts of southern California, Only God Forgives takes place on the other side of the globe, in much darker, more frightening avenues and alleyways.

Bangkok is known for its intense and busy nightlife and Refn takes full advantage of that, bathing the film in pink and red curtains of neon and setting the film almost entirely at night. A night which never seems to end. As if daylight finally gave up the battle to the darkness and the artificial light and moved on to more appreciative shores.
Long, peering shots into hallways and walls crawling with demonic looking Asian designs in black and gold create a Hell-like atmosphere. That, along with the story itself and its moments of ultra-violence, conspire to create a film which is unpleasant to watch and leaves the viewer with a sick feeling in the pit of the stomach, anticipating, not unlike Refn's earlier Pusher films, something dark and gruesome around every next corner.
In short, it's not a fun movie to watch and I was glad when it was over.

Drive was a masterpiece. That's all there is to it. As a follow up, to call this movie a disappointment is an understatement. But this movie isn't Drive, it isn't meant to be, it's its own beast, quite literally, and it should be considered on its own merits and detriments as such.
But whereas Drive had a peppy soundtrack, a love story (of sorts), a heroic type character to get behind and conventional storytelling, Only God Forgives really has none of that.
The music is scary, the relationships are insane, the narrative beats are strange and confusing and it gives you no one to root for, no one to like, even.

In short, this isn't the type of movie most people are going to want to slip in to after buying their britches at Target on a Tuesday.
I think even the filmmakers are aware of that and that's why they decided to give it an early digital release while it makes its rounds in limited numbers at the independent cinemas.

Refn is a great director. There are many beautifully framed shots, lots of well thought out angles, I just don't think Only God Forgives is material worthy of his talent.
And while I'm as big a Nolan or Tarantino fan as the next guy, I'm not big into the free reign narratives associated with filmmakers like Jean-Luc Godard and Frederico Fellini.
I like unique storytelling, but I also like stories with a beginning, middle and end and a narrative that isn't purposely trying to leave you behind while it skips merrily along into the next nonsensical beat.
And, unfortunately, Only God Forgives skips. It skips like a six year old girl in pigtails on a summer day.

Verdict: As unpleasant as it is frustrating, Only God Forgives is a film that will appeal to some, but probably not to most. It's sickeningly violent, uncomfortably dark and, well, boring, which is one thing it shouldn't be given the other two.