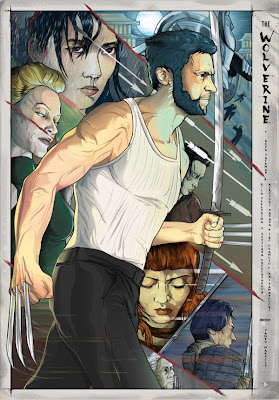 A book came out recently called 'Difficult Men' about the male protagonists of popular recent TV dramas like The Sopranos, Breaking Bad and Mad Men. The book talks about how in all of these hugely popular and immensely well made series, the male protagonist is almost always a flawed character. Someone you couldn't even really call a 'good guy.' It has forced those of us who consume these shows to root for and care about characters who at times do despicable things.
The same could be said of the recent smattering of superhero movies. From Batman's tortured inception and the subsequent lifelong haunting of guilt which plagues him, to Tony Stark's newly developed anxiety disorder in the most recent Iron Man to Wolverine's Logan, in some ways the most tortured of all.
Logan's problem is that which has been a central torture point in vampire fiction for decades, centuries even. The curse disguised as a blessing that is immortality.

It would be easy for one to wonder what Logan's problem is in the first place. Think about it: the dude can't die. You cut him, his lacerations zip themselves up. You shoot him, his body spits out the bullet and fills the hole in good as new. Break his bones, they'll snap back into place. What's not to love about that? No aging, no muscle fatigue, no heart disease, cancer, tommy aches. In fact, according to the movies, the only way to actually kill this guy is to lop his head off, medieval-style.
That might be fun for a couple hundred years, but eventually it would take its toll.
For all the physical immunity Logan possesses, his emotions take the same beating anyone else's do, only instead of having seven or eight decades of regret and heartbreak hanging heavy around the neck, he has (I'm not sure exactly how old the character's supposed to be) seven or eight centuries. You fall in love, you start a family, you watch your family grow old and die and leave you behind, again and again and again. Those experiences can add up to one hell of a headache after a while.
This is why Logan's so pissed off all the time. This is why he hasn't had a good night's sleep in countless years, plagued by vivid nightmares and awaking in a panic every morning. That could put a bee in anyone's bonnet.

It's easy to forget, given how high his star has risen in the thirteen years since, that Hugh Jackman was essentially a nobody when he donned the claws for the first time back in 2000, busying himself with theatre and bit parts in crappy, forgotten TV shows.
It's an understatement to say that casting him as unarguably the most popular character in the X-Men cannon was a gamble that could have gone either way for Marvel's then cinematically untapped mutant comic-verse adventures.
But he was a good fit. He was magnetic, intense, at ease in the rage he carried on his characters' shoulders. And it made him an instant star.
Jackman's now played Wolverine seven times, inhabiting the character more than any actor has ever inhabited a superhero character before. That's as many times as Sean Connery played James Bond (random fact: Hugh Jackman was offered Bond but turned it down, afraid of being typecast in the role, which lead to Daniel Craig getting the job instead).
Now, in 2013, Jackman still has that same intensity on screen as the character, the same anger and guilt and torture. It's refreshing seeing an actor maintain that consistency with a character over such a long period of time. Something you can't really say for Connery as Bond, with his bitter financial disputes clouding his performances in the later films. Or for someone like Bruce Willis, who slept through the latest Die Hard instalment.

I know without actually knowing any of the people that work there that Marvel would prefer if everyone just pretended their last Wolverine film 'X-Men Origins: Wolverine' didn't actually happen, as it was an atrocious piece of garbage and a sullying of the name of the great beast himself. But it did happen, and it was terrible, and that makes the fact that The Wolverine is actually good that much more satisfying. It was that much more satisfying for me and I've never even read the comics.
It's not a perfect film by any means: there's a couple characters who are underdeveloped and under-explained and their purpose in the film is flimsy when it isn't confounding (I'm looking at you, Viper). There's a big action scene that's set on the roof of a speeding train that's well shot and exciting, but after a million action scenes set on the rooftops of a million speeding trains, this set piece is starting to feel a little stale. A lot stale. And while the film is mostly well told, it just can't help falling into mediocrity and obvious, derivative storytelling in its final act.

The Wolverine is set in Japan. There aren't many cooler places to set a film on this earth than Japan. Especially Tokyo, where in one corner of the city you'll find ancient traditional living that looks like it hasn't changed a lick in several centuries. And in another you'll find the kind of advanced real life sci-fi technology the imagination of Philip K. Dick couldn't have comprehended in his heyday. It's one of the most attractive aspects of this film and a character unto itself that talented hit or miss director James Mangold puts to good use, mostly in the dark and mostly in the rain, both of which, mixed with the city's endless neon, create the appropriate atmosphere for a story that hits the plot points this one does.

Verdict: I'm not a huge X-Men fan. I don't remember the original films that much. I do remember liking the recent 'First Class' chapter and hating the last Wolverine one. So I don't approach The Wolverine from a place of fanboy skepticism (or from a place of fanboy optimism for that matter). I just want to see a good movie. The Wolverine is a good movie. It has it's problems, but it also has lots of action, good acting, great atmosphere and a (mostly) strong plot. Who knows how the next, currently shooting X-Men movie will turn out, but it has some living up to do.