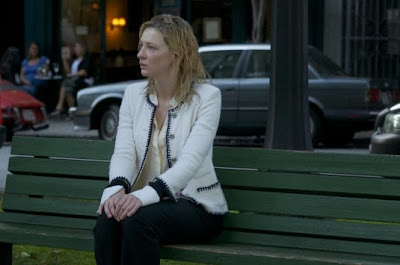 A woman is falling apart. Her mental seams are ripping. She is adrift in the bottomless empty, the all consuming darkness that is acute anxiety and depression.
She washes an endless marching line of Xanax down her throat with gin and vodka in an attempt to tranquilize her fragile state. But as anyone who has any knowledge of anxiety and prescription pill abuse knows, these coping strategies only rally together to make things worse.

This is a woman who once, and not so long ago, had it all: money, powerful friends, a loving husband, a son on a fast track for greatness.
Now she lives in a fog, is cruel to those who try to help, mumbles to herself in public.
Her hardship is such that she will either end up suffocating entire under its weight, or outlast it and emerge a stronger woman as a result.
As Blue Jasmine unfolds, we are unsure which end she will eventually face, if either, but the journey becomes more consuming as it also becomes more desperate.

As of Blue Jasmine, Woody Allen has made 44 feature films. With a few exceptions towards the beginning of his career, basically a film a year since 1966.
He writes and directs every film he makes. Writing them out on legal note pads in first draft and then punching the final drafts out on the same typewriter he's been using pretty much his whole career.

There are elements those of us who have seen many of Woody's films have come to expect in them as they pop up on marquees every summer or fall: that familiar, reassuring white font on black screen that plays over soft jazz and introduces the actors and some of the crew at the start of the film; the themes of anxiety, thanatophobia, hypochondria and other neuroses that have plagued Allen hisself for much of his adult life; snappy, comedic philosophical dialogue that often speaks to these themes; and of course, adultery and unfaithfulness which Allen seems incapable of writing a film without featuring in at least one and often several of the relationships in it.

And while Blue Jasmine has all of these trademarks nestled within the scripts pages, it also stands apart as being a far more dramatic and gritty filmic episode than Allen viewers and fans are likely to expect.
In fact, in my theatre, at 1:00 on a Sunday afternoon, I was the only moviegoer under the age of 65 or 70 (I do live in a town with a population containing a large number of retirees). There was no shortage of gasping and startled noises coming from the congregation as Blue Jasmine unfolded to be a far more dramatic experience than many of them were expecting. And some snippets of conversation floating around after the movie I caught on my way out included 'well, that was nothing like Midnight In Paris', 'I thought his shows were usually funny' and 'are you sure this was the right movie?'

No, this certainly is not Midnight In Paris. This is a nervous breakdown in full summer bloom.
I also don't want to lead you to think that Blue Jasmine is nothing more than a grating, crushing blow to your serotonin. This is not his version of the relentless punishment (in theme and pace) that was last year's Amour.
After 43 movies, Allen understands the balance required to keep a moviegoer engaged and happy. There are moments of levity and occasional humour to offset the protagonists unravelling.
Allen uses a Blue Valentine approach to the narrative wherein he intercuts flashbacks to tell the story of how the woman comes to the place we find her when we do.
There are no dates or cheesy visual effects to let you know you're seeing a flashback when you are, but it's easy to follow. If there's one thing Allen knows the value of, it's narrative simplicity. He's not trying to be Tarantino here.

Allen is such a hugely respected and admired filmmaker that I can guarantee you there isn't an actor in Hollywood or anywhere else who wouldn't drop everything they're doing to be in one of his films. This ensures a solid cast of performers with every film and Blue Jasmine is no different. From well established stars like Alec Baldwin to enormously talented character actors on their way up like Bobby Cannavale, everyone is fantastic in this movie. But it's Cate Blanchett who really steals the show. This is far and wide her best screen performances and she's got all kinds of rewards in her near future, mark my words. The truth and depth she brings to this very troubled character is astonishing.

Slinging out a flick a year and hitting a bullseye with every one is damn near impossible and Woody Allen is no exception. Midnight In Paris was one of my favourite films of 2011, his To Rome With Love, from last year, was one of my least favourite. So it's hard to say what you'll find in his annual cinematic Christmas card, but I will see every single thing he makes until the day he dies because every time you sit down to takes in a Woody Allen film, it could be the best film you've seen all year. Like this one was.

Verdict: Woody's 44th film is an amazing piece of dramatic cinema and an absorbing, brave tale of mental anguish and self destruction.