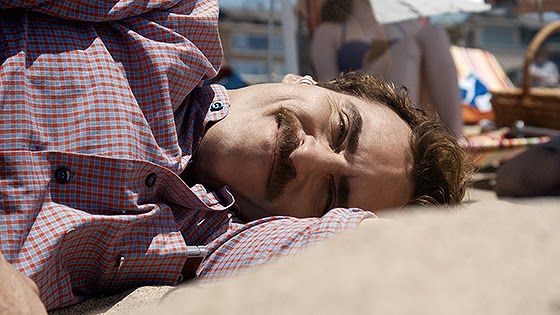 Her is a movie that aches. It aches for its characters, it aches for its story and it aches for what it says about the nature of relationships and of technology. Where we are with it and where we're headed.
We aren't given a specific date for when the movie takes place, but it isn't very far from now. It's a world instantly recognizable and in that way immediately unsettling.
It takes place in Los Angeles. The skyline's a little different and everything looks more industrialized, less tropical. L.A.'s infamous smog problem hasn't been solved, in fact it's worse. Buildings stand in silhouette among an ever-present cloud which sits in the city. The sun reduced to a hazy smudge somewhere up there.
Fashions have continued on their current trend and reverted almost entirely back to late 60's/early 70's decorating and attire. Men wear their pants awkwardly high and women seem to favour dresses and skirts.
Another trend the film highlights is the world's continued endeavour for increased laziness. Invent more to do less. Everything is voice activated. Your phone now not only acts as a one stop shop for all the events in your life and the lives of people you know, but it acts as a personal go between as well. It reads your emails to you, reads the news to you, reminds you of meetings. It does so much in fact, that person to person contact has become fairly rare. 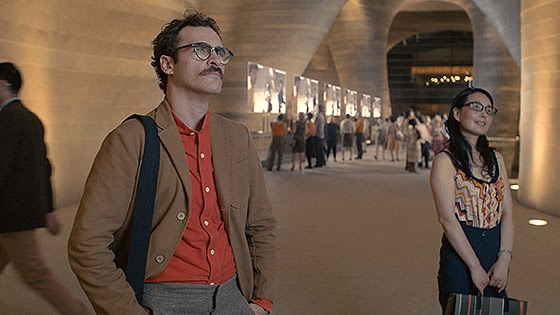 In fact, the crowd scenes in this movie look remarkably similar to the crowd scenes in real life. There's the occasional couple, but for the most part the world has become individualized. Human contact and relationships have become strained and awkward. Circles of friends have become relegated to a select few. And everyone's best friend is their phone. Just a large jumble of individual bubbles walking around mumbling to themselves. Now tell me. Am I still talking about the movie, or the present day?

Her is a quirky little tale. Everything Spike Jonze touches has an element of quirk to it. That's part of what's so comforting, fresh and unique about his work. I mean Being John Malkovich as a debut full length film? Doesn't get much quirkier than that. Or how about the music video (the greatest music video of all time) Spike made for Fatboy Slim's Weapon of Choice. YouTube it if you haven't seen it and treat yourself. It's brilliantly quirky.
But quirky material needs quirky talent to project it. Enter Joaquin Phoenix, perhaps the quirkiest (read: weirdest) actor in mainstream cinema. You're never quite sure where his stranger roles end and where he begins. The funny thing is, this is one of the straightest roles he's played in a while and while he's good in it, he also has this caged animal vibe about him. Where you can almost see his self struggling to keep it straight. I don't know. Maybe that's the way the character was written.
Joaquin's foil (and love interest, and soul mate, and computer) is played, in voice only, by Scarlett Johansson. She's also very good. Her sultry, slightly squeaky, sensual voice is a perfect fit for the character she portrays and her performance actually brings a great deal of depth and dimension to fairly offbeat role. 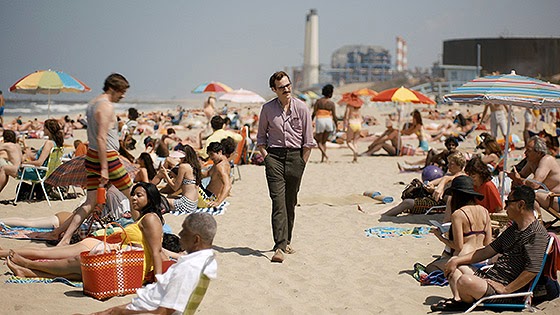 When I said this film aches, one of the ways in which it does is in its visual palate. You might think a film that takes place in a city with ever-present smog and is populated by lonely souls would be drab and ugly. Well this is where brilliant filmmakers are separated from not so brilliant ones. Jonze photographs this film with such subtle elegance it's poetic. The lighting schemes often mirror the protagonists emotional state, but even when it's draped in darkness or filled with fog, there's always something to look at and it's always beautiful. One of the films sunniest instances is when the sun finds its way through a break in the smog to light up a beach. This is not only one of the most poignant scenes in the film but one of the best looking, with no shortage of lens flaring used to great emotional effect.
There's also a scene late in the film when things are beginning to fall apart for Phoenix's character. As he lays on his bed, specks of dust dance and fall in shafts of light, as if representation of his world crumbling and falling from the light of safety into the darkness and uncertainty that waits below it. 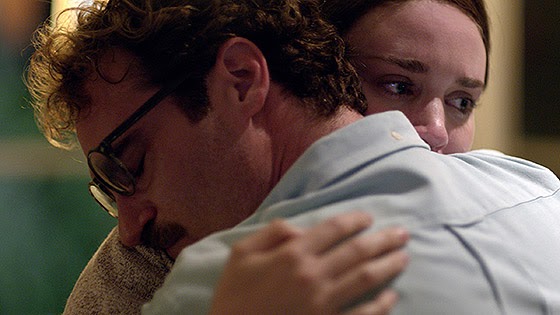 I'm not one of those guys that sees subtext in things. I usually take things at face value and don't read into them too much. When I hear people talk about certain movies really being about this or that or actually what the whoever was trying to say was..those things often blow right by me. If I'm watching a film about a guy who goes to Europe to start a pop group, I'm watching a movie about a guy who goes to Europe to start a pop group. Not a movie about the state of the nation in regards to it's environmental consumption or some damn thing. But I could not stop seeing in between the lines in Her. On the surface and below it, it's about so many relevant issues happening right now and seems to comment on such universal themes that the fact that it's also an actual story with a beating heart made this a movie that moved me very deeply. Is it about a guy who falls in love with his computer? Yes. Is it about technology replacing human relationships? Yes. Is it about love, companionship, loneliness, the toxic effects of divorce and the right for every human being to love who they choose to (within certain legal boundaries of course) Yes. This isn't just the best film of 2013, it's the most relevant, poignant, important and cautionary. This was more than entertainment for me, it was a revelation.