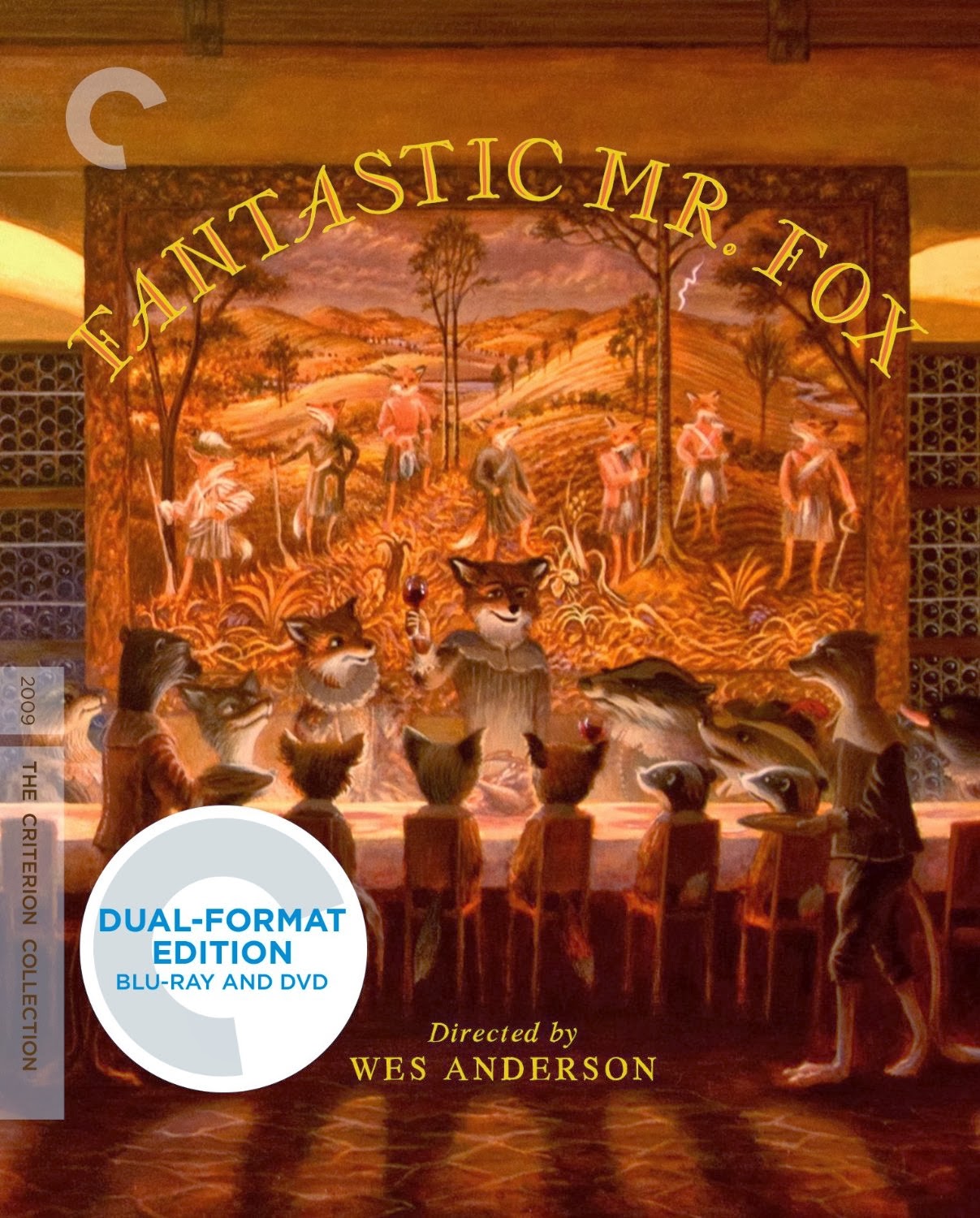 Movie:
I don't know if I would've thought about it if this movie hadn't come to be, but is there not a more perfect pairing than Roald Dahl and Wes Anderson? The quirky narrative sensibilities and acute visual elements to their storytelling make for a perfect fit. I think Anderson could have taken any of Dahl's beloved stories and adapted them into wonderful films, animated or not.
Being a huge fan not only of Dahl's but also of Anderson's, an adaptation of one of Dahl's best books in charming stop-motion with such a talented group of actors lending their voices, this movie was a pretty big deal for me when it came out.
The great thing about Fantastic Mr. Fox is that it has something for all ages. Kids love it because it's a cartoon, it features talking animals wearing grown up clothes and an exciting, adventure filled storyline. Adults love it because it speaks to the same questions and fears that we face and ask ourselves every day: why am I here?; am I more than the sum of my parts?; what is truly important?
It's a deep film, but not so deep that it isn't afraid of having a good time. There's enough slapstick, visual gag-ery and that trademark dry, witty humour that can be found in all of Anderson's films. Fantastic Mr. Fox is a just a very funny, touching, charming film and one of the best adaptations of Dahl's stories thus far.

Extras:
This is Criterion's sixth release of Anderson's work and they've given it the same care and attention to detail that they have his previous releases. Fantastic Mr. Fox is chock full of extra content that will take hours to plow through.
The first thing I did was watch the movie with Wes Anderson's commentary track, exclusive to this release. Commentary tracks can be hit or miss affairs. Sometimes you'll get an enthusiastic filmmaker who takes you through a step by step film school of how the movie came to be; sometimes you'll get some cast members  hanging out joking about behind the scene hijinks; sometimes you'll get a pathetic patchwork of interview soundbites cobbled together to make it sound like the person talking is watching the film with you when in actuality they aren't.
Anderson's commentary flits between making of 'this is how we accomplished this' and a great deal of pointing out the obvious, e.g.: 'Ok, so here we have Mr. Fox in the cider cellar. Mr. Fox was voiced by George Clooney.' Yeah, thanks Wes. It's an easy listen though. Anderson has a laid back, easy going demeanour and peppers his conversation with the same witty humour so dry you don't realize he's made a joke until a minute or so after he's made it.
There's a bunch of in depth featurettes on the making of the film. As is the case with all stop-motion animated films, the number of people and amount of time it takes to pull one of these movies off is almost inconceivable. Anderson says at one point that he usually films with a single unit, which can be overwhelming, and on Fox they had something like twenty three units, all working simultaneously. Insanity. It's all very informative and interesting stuff, though it does get a little redundant at times and there's some overlapping of information, which happens often with these kind of making of features.
Elsewhere, there's a one hour documentary on Dahl which was originally broadcast on BBC and features interviews with his family at his beloved 'Gipsy House' in England. It's illuminating and sad. Dahl's life was strife with tragedy and hardship.
One of the coolest features in the set is an audio track of Dahl himself reading the entire original novel of Fantastic Mr. Fox. I guarantee you won't hear a better reading of that book than by the man who wrote it.
There are also a number of photo galleries of the puppets, the tiny props and Dahl's original manuscripts of the book. As well as a very humorous letter exchange between Dahl and the book's publishing company where they ask him to tone down some of the saucier aspects of the book and Dahl basically tells them to go 'f' themselves in a very Dahl way.

Packaging:
Criterion is the very best company for releasing movies on home video when it comes to packaging and cover art. In this releases case (no pun intended) they've done a wonderful job. The cover art is a beautiful hand painted still from a scene late in the movie that wraps around the whole box. Inside there's another hand painted mural of the Boggis, Bunce and Bean landscapes. The same one that appear in the film that is drawn by Mrs. Fox.
The box unfolds to reveal three discs housed inside. Two DVD's and a blu-ray. The DVD's have the same content the blu-ray does, just in standard definition. The discs have more set paintings on them. The whole box, inside and out is coloured in the same earthy tones the film is. In fact, the same earthly tones Anderson himself often dresses in.
Finally, there's a 33 page booklet inside that features more set and prop photos, illustrations, an essay on the film and a excerpt from a New York Times article Anderson wrote about visiting Gipsy House in 2002.

Verdict:
While they can be overpriced, Criterion Collection editions of classic and contemporary films are always the very best editions you can buy and truly top of the line releases in every way. Criterion's love affair with Anderson's films continues with their edition of Fantastic Mr. Fox: beautifully illustrated packaging and booklet; hours of bonus content; perfect high def picture and sound. The set will run you between $30 and $40, depending on where you get it. But if you're a fan of Roald Dahl, Wes Anderson or Criterion releases, it will be money well spent.