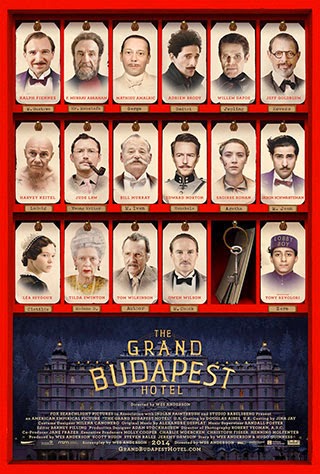 You can dismiss Anderson's work as quirky indulgence or comi-tragic tripe if you must, but you simply cannot fail to acknowledge the breadth of his vision and the impressive scope of his ambition with every subsequent film he releases. If the devil is indeed in the details than Anderson's films are pure evil. Whether tackling broken hearts at a snooty prep school; the twilight years of a simple oceanographer; the idiosyncrasies of a dysfunctional family dynasty; or adapting a beloved children's book in the painstakingly time consuming art of stop motion animation, Wes Anderson is a true maverick in his field.
The Grand Budapest Hotel represents Anderson's eighth full length cinematic foray into the oddball universe he has imagined and populated with some of the most interesting character creations this side of the millennial bounce.

There's a scene in The Darjeeling Limited that is a perfect encapsulation for The Grand Budapest Hotel: three brothers are riding on the eponymous locomotive through the Indian countryside on their way to reconnect with their mother following their father's passing. Jack, played by Jason Schwartzman, has written a short story featuring the three brothers as characters, thinly disguising them with different names. The story isn't important and the point of the story isn't important. All that's important about this scene is that it is a story within a story. You can find stories within stories sprinkled throughout much of Anderson's work. The Grand Budapest takes this convention to a new height by telling a deck of cards formatted tale with layers upon layers of stories within stories so intricate and tightly plotted it's best not to overthink it, just to enjoy.

The basic premise is simple enough: it's the story of how a man came to be the proprietor of the once luxurious Grand Budapest Hotel, and the journalist who hears his story and writes a famous book about it. And then of course the tale doesn't unfold as simple as all that.
The story is good and a lot of fun but what's most impressive about Anderson as a director and what's most impressive here is his eye for detail and framing.
Anyone who would choose to make a stop motion animation film in the second decade of the 2000's and be as involved in the process as he was (see the special features of the Criterion release of Fantastic Mr. Fox) must have a great deal of patient energy. You can tell throughout all of Grand Budapest that a lot of careful consideration went into the framing of every shot. Every single still of this movie could be printed and framed on a wall. The same goes for the camerawork. The camera is constantly in motion, anticipating, following or catching up to the action on screen. There are lots of impressive angles and it all conspires to create a visually rich and dynamic film to match its subject matter perfectly.

Anderson's casts have become almost as impressive as his movies. Like Woody Allen, he's reached the kind of critically praised and commercially successful peaks that draw celebrities to his films like horse flies to a cow's anus. In Budapest he has assembled one of his most impressive casts yet. And the best thing about this cast is that it's the perfect balance between old and new. Anderson alumni Jason Schwartzman, Bill Murray and Owen Wilson each pop up for a scene or two, while past collaborators Edward Norton, Tilda Swinton, Jeff Goldblum, Adrian Brody and Willem Dafoe rub shoulders with newcomers Jude Law, F. Murray Abraham, Harvey Keitel and Ralph Fiennes. Every single one of them is amazing and they deepen and enrich every wonderfully written character in the film.

It's hard at this point to pick a favourite Wes Anderson film because of the eight, I've only seen three or four of them recently. So until I have a chance to run myself through an American Empirical Pictures marathon, all I'll say is that I know without a doubt The Grand Budapest Hotel will reside in the top two or three on my list. It's always nice when your twelve bucks goes somewhere nice.