The way we are 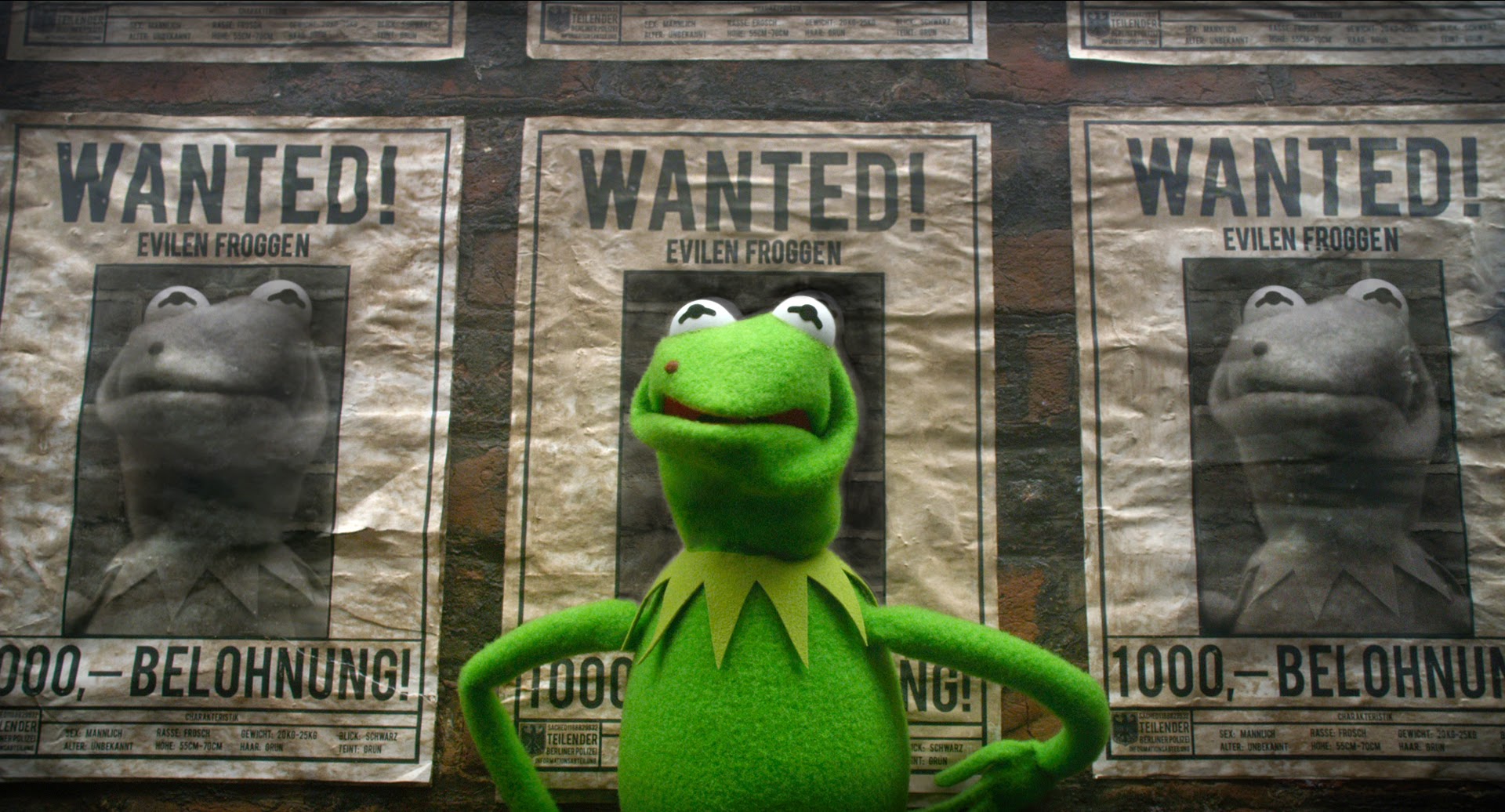 ...and with that the gang were back. Back in the saddle. Back in action, as it were. They had saved their Muppet theatre and had won the public's affection and earned their right as part of the here and now, rather than the once was. But where to now? As the previous film's final number wraps up on the streets of Hollywood, The Muppets stand around and ask themselves this very question. 'How about a world tour?' asks an appearing out of nowhere Ricky Gervais. Sure, why not. And off they go.

I have to say, part of what made the last Muppet movie so special was that it was a triumphant return to form for a beloved institution that had been out of the loop, or delegated to material that was well below their worth, for so many years. It may have been made in a posthumous Jim Henson world and without the interest or collaboration of Frank Oz, but it had the spirit, it had the songs, it had the celebrity cameos.
The Muppets: Most Wanted is at a disadvantage then, as it not only is faced with overcoming the plague that is the lesser-than sequel, but of maintaining the Muppet reboot magic without the aid of the 'remember us' plot devise that served the last film so well.

Right off the bat, Most Wanted admits in song (how else?) that it realizes it's a sequel and is also aware that the majority of sequels suck. And while Dr. Bunsen Honeydew is quick to point out that Muppets: Most Wanted is actually the eighth theatrical Muppet movie, this film is the original sequel to the reboot. It's nice it has this self referentiality in place, because this film is certainly inferior to the near flawless last one. It has all the right muppets in all the right places. It has the songs, the celebs, the cameos, the jokes and the themes of the friendship, forgiveness and determination that have peppered every Muppet movie since the 1979 original. But it doesn't do any of these things as well, or as memorably, as the last one did. It also just isn't as fun. The human stars of the film don't seem as genuinely starry-eyed to be there, the blink and you'll miss 'em cameos are kind of weak, the songs are less memorable and the story grinds to a halt, or keeps chugging when it should be grinding, in a few places.
Kermit and his nemesis Constantine get the majority of the Muppet screen time and as such, many of even the main Muppet cast are delegated to a few lines and little more than filling out the background. Newest Muppet Walter, who you'll remember from the last movie, initially feels underwritten. Though his part gets a little meatier towards the end of the movie. Even 80's robot, who's outdated exclamations were so rad in the last film, doesn't get a single tubular coin of phrase in Most Wanted.

It has it's moments though. Ricky Gervais has a song and dance number with bad guy Constantine (Kermit's exact double save for a mole on his upper lip), that is so silly and even strange, it's exactly the kind of thing he'd be making fun of someone else for doing at the next Golden Globe awards. Tough guy actors Ray Liotta and Danny Trejo have small parts as prisoners who spend most of the movie harmonizing and dancing ridiculous dances to Tina Fey's musical numbers. Modern Family's Ty Burrell is the best thing in the movie and it's nice he has the best written character as he seems as if he's having the most fun. And Rizzo the Rat, sorely missed in the last Muppet outing, finally makes his appearance in a bid to complain about his shaft in the last movie. Though his screen time in this movie is only about fifteen seconds, so someone's evidently not a fan of rats.

It must be said that the grievances I have with Most Wanted will not occur or matter to most kids (they didn't to mine) and that despite it's inferiority, Muppets: Most Wanted is still a fun time and in no way an out and out 'bad movie.' The next chapter might just need a joy-filled kick in the tadpole to get things back on track, that's all.

Verdict: Suffers the sophomore slump and in no department as memorable as the last film, but still unequivocally Muppets and still fun enough for kids to love.