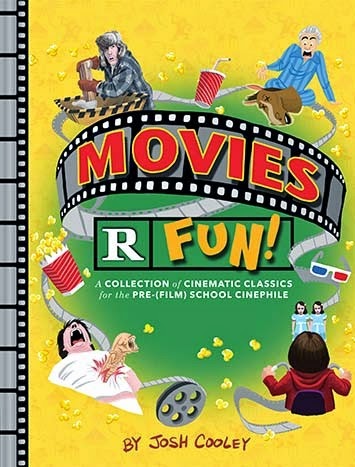 If your two loves happen to be preschool aged storybooks and ultraviolent movies no preschooler has any business watching...you're a weird dude, but you're also in luck! Movies R Fun! combines these two disparate entertainments into one colourful, hilarious, wonderfully illustrated snapshot of some of the greatest adults only cinema of the last 50 years.
40 films are given the Little Golden Book treatment, with each page devoting a memorable quote or two and an inventive illustrated take on some of the most violent and scandalous scenes from some of the most violent and scandalous movie classics.

Josh Cooley is a talented artist and writer who has worked as a storyboard artist on half a dozen Pixar films, as well as writing and directing a handful of short films himself. So he comes by movie knowledge and animation ability honestly.
The book is published by rapscallion publishing company Lil' Inappropriate Book, which is an adult takeoff of the Little Golden Books series for children.
Which is to say that Movies R Fun!, despite its dressings is a book intended for an adult audience, even though the violence and sexual depictions in the book are all suggestive, rather than graphic. So it's not a book you want to stuff your kids' Christmas stockings with. It's also not a book you're going to read again and again. It takes the better part of five minutes to read and admire the entirety of the pages within and you won't have much need for pulling it down off the shelf for your own amusement often enough to justify the price tag. But if you're a books on film collector, or want something deceptively cheery and undeniably entertaining to show your friends when they come over for movie night, you could do a lot worse with $12-$15.
And if nothing else, it's sure to inspire you to watch or rewatch the movies it pays tribute to. And that may be its greatest strength. After all, as the back cover of the book so wisely informs us, 'let's face it, reading sucks.'