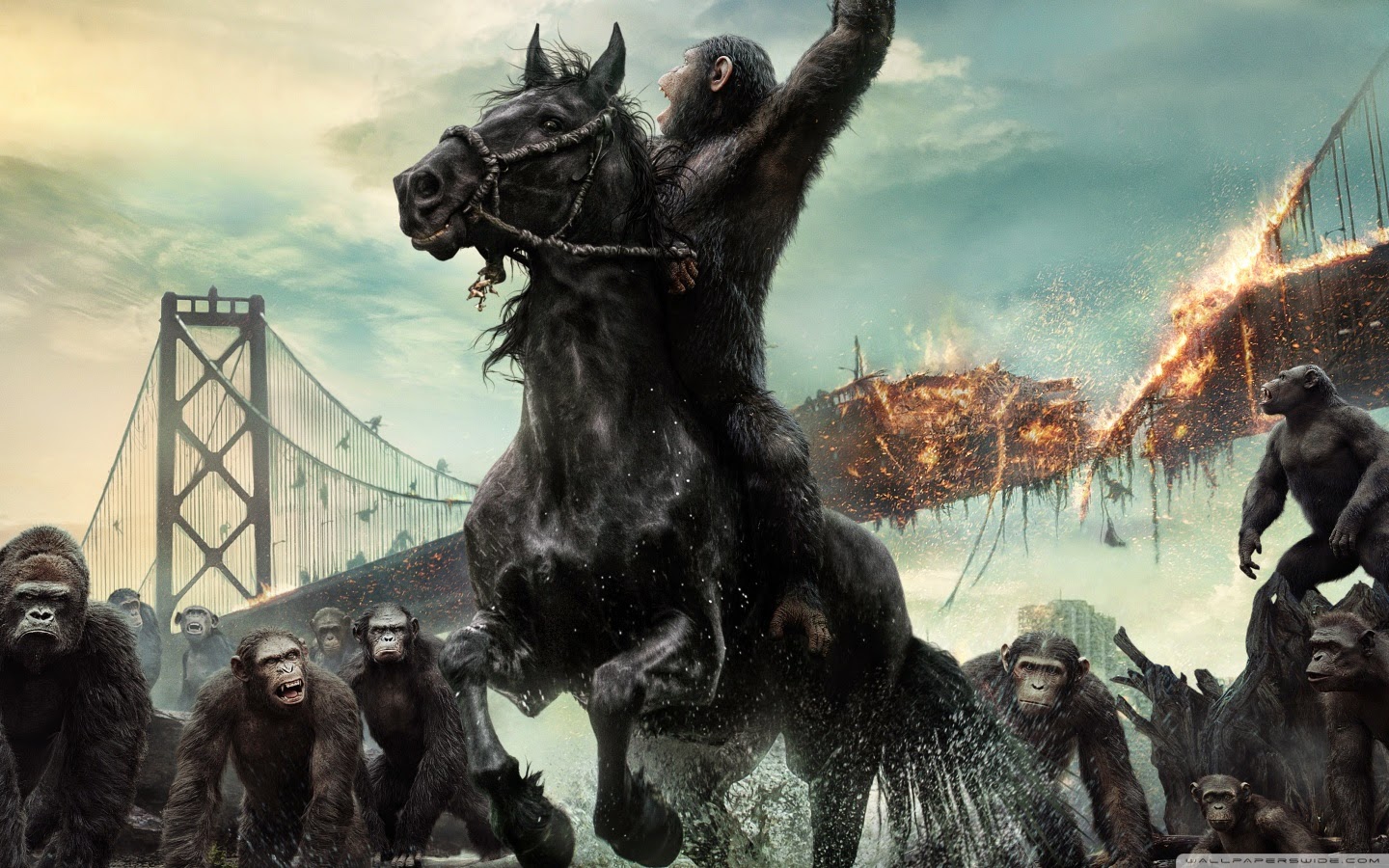 Emotion transcends biology. To live, to die, to survive, to hurt, to fear, to lose, to win. These are emotions which can be felt and related to among a wide variety of species on this earth. If you strike me and I bleed, does it matter if I'm an ape or a human? Or a dog or a cat or a cow for that matter? No. Because the end result will often be the same. I'll feel pain, possibly anger, probably fear. I will learn something about you. And as a result, trust will either be established, or broken.
This seems to be the underlying theme of Dawn of the Planet of the Apes. These are the questions it asks and the themes it provides.

Picking up directly where the last movie left off, Dawn sees human civilization dying away, leaving behind a post-apocalyptic wasteland where the few remaining humans get by the best way they can.
Meanwhile, in the forests outside of San Francisco, a large colony of apes have built their own civilization under the rule of their alpha male leader Caesar. Using the knowledge he was given in the last film, he has taught the apes to communicate, hunt, and survive in an advanced manner. Eventually, the humans go looking for a dam outside the city that they can fix and reestablish power to the city so they don't all starve. While trudging through the forest, a few humans bump into a few apes, who thought the humans were all wiped out. Trouble ensues.

If Charles Darwin had lived another hundred and thirty two years, I imagine he would have loved a movie like Dawn. With the power of knowledge, the apes have evolved and without power and dwindling resources, the humans have devolved, making the two species not so very far apart at all in this sequel. In fact, as much as we are responsible for the knowledge we find the apes with in Dawn, there is much we can learn from them about living off the land and surviving without artificial resources. Which begs an important question at the end of this film: are they evolving into us, or are we evolving into them?
I know I could sure as hell do a lot more with my day if I had the ability to use my feet the same way I use my hands, couldn't you?

As things in the film heat up between the two sides and difficult decision have to be made, the considerations and consequences for both are the same. Even the long held grudges are similar. The apes don't trust the humans because of the way we, and not so long ago, kept them in cages and cut, poked and prodded at them in the name of medicine, research and cruelty. We don't trust the apes because the virus that broke out and wiped out a significant portion of earth's population was initially carried by an ape. Albeit an ape that was infected by human scientists in a lab.
So there are a lot of hard questions the film asks throughout. And one of those seems to be who the hell to cheer for. With good guys and bad on both the apes side and the humans, you'll find yourself unsure of who you'd like to come out on top. It gradually becomes clear though that the point of the film is not to cheer for any one man, woman or ape, and not about how one rotten apple can ruin a whole basket, but a very concise picture of the importance of peace and the senselessness of violence, in any culture, clan, or species.

That, and the monkey fight on a collapsing skyscraper hundreds of stories above the San Francisco pavement.

Verdict: Utilizing top of the line acting talent, special effects and narrative punch, Dawn of the Planet of the Apes is without a doubt the best movie we will see this summer. A movie that deserves a place in the Oscar race. It is a much more thoughtful, exciting and rewarding experience than you'd think and even the predictability of it's narrative doesn't detract from the entertainment it provides.