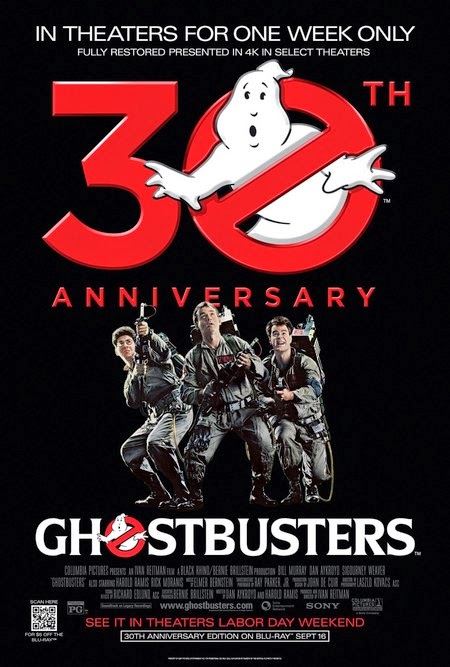 While the world waits patiently for Ghostbusters 3 to come out and, probably, sully the reputation of the first two (let's be honest), it's fun to have these reminders every half decade of one of the greatest and most original movies of the 80's.

It's easy to take for granted how special and unique this film was (and still is) when it came out in 1984. There had been movies about ghosts before, movies about crime fighters before. Some had been comedies, some horror, some sci-fi, some drama. But Ghostbusters was the first film to combine all of those elements into a single package.

I grew up with this movie. The second one too, but I watched it mainly for a change of pace. I've probably watched this movie over a hundred times throughout my life. It's a film I could watch when I was a kid and as soon as the credits rolled, would stop, rewind the tape and watch again. Again and again and again. I never got sick of it, was never not in the mood to watch it and its effect on me never wavered. The scary parts were always scary, the funny parts were always funny. The awe of seeing a hundred foot marshmallow man tromping through the streets of Manhattan never wore out. The film transported me to a place I wanted to be and a time I was too young to remember. For a number of consecutive years I went as a Ghostbuster for Halloween. I had all the action figures and vehicles and McDonald's toys. I was able to discern, even from a very young age, that the movie world was fictional and a product of someone's imagination, having no real bearing on reality, and I never believed in ghosts. But if I ever had, a Ghostbuster is all I would have wanted to grow up to be.

It's funny how forgiving one can be of a film that carries with it such pleasant nostalgia.
Watching Ghostbusters for the umpteenth time, this time on the big screen and in higher definition and detail, I noticed things I hadn't noticed before. Cheesy, clumsy elements in the script and the execution of some of the scenes which are pretty glaring but which I had subconsciously shrugged away in my previous viewings. When you're watching a film you love, one you've grown up with and know inside and outside and upside down, you get to a point I think where the basic enjoyment you get out of watching it supersedes some of the more dated elements that would be much more bothersome if watching it for the first time around.
The same goes for logic. The New York of the Ghostbusters universe is a sci-fi western where ghosts are the bandits and the Ghostbusters are the town marshals, throwing a lasso hogtie around them and locking them up in the jailhouse. But even within those parameters of movie reality, the fact that, for instance, the Ghostbusters, after stern warnings that doing so would obliterate them, not only cross their streams to defeat Mr. Stay Puft, but also cause an atomic explosion as a result, and walk away virtually unscathed (aside from some marshmallow coating) is ridiculous.
But this film is a comedy at its core and no studio head in his right mind would finance a Ghostbusters where the Ghostbusters must save the day through self sacrifice. Because, a) happy endings always mean bigger box office than sad ones do, and b) after two-ish hours of ghost busting fun, we know and love these characters and want to see them all back for the sequel.

Ghostbusters is proof that 'timeless' and 'dated' are not concepts which exist on opposing poles, for it is both. It is timeless because watching it will never get old. Because for many of us it represents a piece of childhood and growing up. It's timeless the way that memories are timeless. You don't recall something that happened to you when you were twelve and think 'what crappy definition, what crappy effects in that memory, what stiff acting.'
On the other side of the coin though, in many respects, it is dated. The special effects are often laughable; the jokes are sharp but the dialogue is silly; the soundtrack is quintessential 80's synth pop which sounds good in 80's movies but no where else; and pay attention, at any point in the movie, to the background characters. Take a drink of pop while doing so and experience the pain of carbonated sugar rushing through your nostrils as a result.

But does any of that matter when we hear Ray Parker, Jr.'s iconic anthem of spectral rebellion? Or when we creep through that library's lower depths during the opening minutes to investigate a ghost sighting? Or the first time the boys throw the switch and fire up the lights on the Ecto-1? Or when we see Slimer? Zuul? MR. STAY PUFT??
No. At that point nothing matters but the pure joy of watching three (and then four) men hunting and trapping ghosts. And of watching three (and then four) actors at the top of their game playing men hunting and trapping ghosts.

For these reasons and many others, Ghostbusters is a perfect movie, despite its imperfections. It's one of the best films of the 80's and one of my top ten favourite films of all time. It's exactly as old as I am and it brings me great comfort to know that we will be celebrating all our age-related milestones together in the years to come.