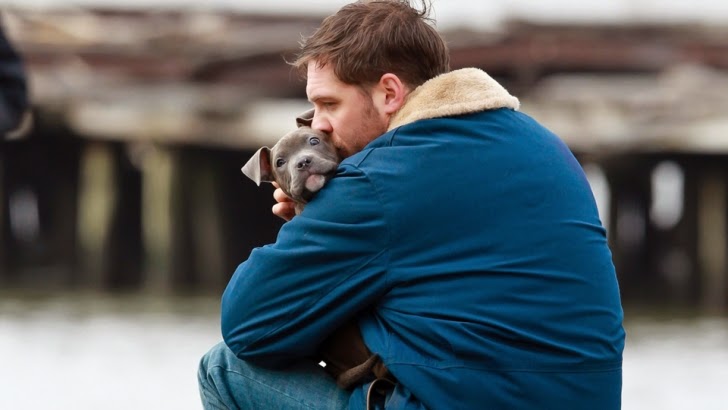 Lonely men in the cinema have always fascinated me. Ethan Edwards, Travis Bickle, Driver. I've always empathized with them. I'm a happily married man with three beautiful kids, but still there's something within them that I can relate to. That I can see within myself. A man who is alone even when he's not is a powerful trait to write into a character. Particularly when they are suddenly given something to care about.

Tom Hardy's character of Bob in The Drop is one of these lonely men. He runs a bar with his cousin Marv, a bar which Marv owned and even has his name on, until he got in deep with some gangsters and they took it away from him. Bob is quiet and soft spoken, he doesn't get worked up and he doesn't rattle easily. When he finds an abused pit bull puppy whimpering in a garbage can on his way home from work one night, his life is changed with the introduction of something to care for and about. He also meets Nadia, who helps him with the puppy and later plays an important role in the events of the film and Bob's life.

The other powerful thing about lonely men, and this is something all these men have in common, is that when they are given something to care about, it's often all they have. So it gets the full brunt of their attention and affection and they are driven by powerful emotions to protect these things by any means necessary. All of these men; Travis and Iris in Taxi Driver; Ethan and Debbie in The Searchers; Driver and Irene in Drive; and Bob and his puppy Rocco (and Nadia) in this, all of these men are given something to live for in the women (or dogs) they care about. All of them are willing to die, or to kill, to protect these women, who are a symbol of innocence and peace in their otherwise dark and potentially rocky existence.
And that's the other thing about these lonely men. They are all, beneath the surface, violent men. There's an anger and a violence that bubbles within them that through sheer complacency they are able to keep in check. And because they are all quiet, introspective men, they have no reason to tap into this violence, until they do. And that's why the bursts of violence in all of these examples, when these men are pushed to protect the things they love, the only things they have, are so shocking, so bloody and over the top. Because there doesn't seem to be any numbers on their emotional dials between 1 and 10.

In The Drop, there actually isn't a lot of violence, more the threat of it permeating every scene. But what little violence there is, is brutal. A gun only goes off a couple of times in this movie, but it's jarring. In part because we've been expecting it, but are unsure of when or where it will rear its head. And in part because it doesn't sound like a 'movie gun.' It sounds like a real gun: loud, quick and ugly. It leaves a ringing in the ears, like someone dropping a large pan on the ground right beside your head. In The Drop violence is not balletic, it's not akin to the flexing of muscles, it doesn't look cool, bathing the shooter in wisps of gun smoke coiling around his body while he chomps on a fat cigar and spits out a catch phrase. And while an argument for its necessity could be made, it leaves the pit of your stomach acidic. In short, the violence in The Drop, is real.

Part of what sells the realism of the film, and sells the sharply crafted words the characters speak (courtesy of master novelists Dennis Lehane, who wrote the script based on his short story Animal Rescue) are the performances.
I've been heading to this conclusion since Tinker Tailor Soldier Spy, but with the passing of Philip Seymour Hoffman, and the spat of jaw dropping performances he's been cranking out since The Dark Knight Rises, Tom Hardy is officially my favourite living actor. The man is a chameleon. Able to transform himself, and particularly his voice, to fit any character. He's like a young Gary Oldman, or Claude Rains. He does what actors are supposed to do, but which gets harder the more famous you get: he makes you forget you're watching the actor. You don't think 'oh, there's Bane. There's Locke. There's Bronson.' You just take him for the character he's portraying.
On the other side of the screen is another hugely talented man in James Gandolfini. It's still a bit of a shock and it still stings that The Drop is the last time we will see Gandolfini on screen in a new film. It's also still hard to separate him from Tony Soprano even after all these years, which would annoy him I'm sure. Particularly when the character he's playing in The Drop is a has been mobster who makes a series of unfortunate decisions in a bid to reclaim his former badass and seek revenge on the men who took his bar away from him. It's not unreasonable to think that his character of Marv is a kind of sequel character to Tony, if Tony lost everything and retired to Brooklyn with his cousin.
Noomi Rapaci is also great as Irene in a different role than she's done before, although she struggles with her American accent at times. And of course the puppies that play Rocco are adorable and make me want to get my own little pit bull (if I didn't have kids and those dogs didn't grow up to be violent offenders).

At the end of the day The Drop doesn't offer a great deal that you can't find in other gangster themed flicks. But in 2014, it's just unrealistic to expect that every time you walk into the dark, you'll find something wholly new and original awaiting you.
What the filmmakers of The Drop do instead is take a tried and true formula and do it the best way they know how. And as a result, we're left with a film that feels like a throwback without feeling redundant. And a film that feels fresh without presenting us with anything we haven't seen before.
That, and a pit bull puppy so cute, you'll want to go to great lengths to snuggle and tickle his belly. And what's more gangster than that?

Verdict: Buoyed by a handful of great performances, fantastic writing and fascinating characters, The Drop overcomes its familiar themes and setting by being a better than usual gangster flick.