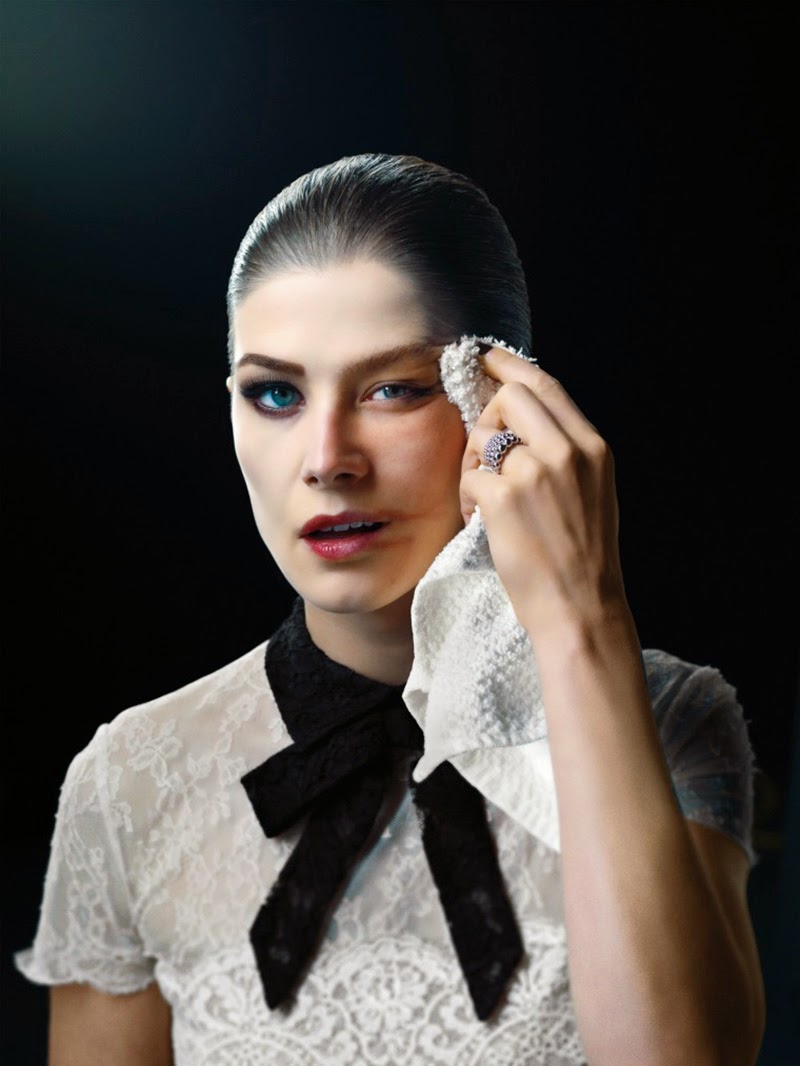 I don't read the book before I see the movie. I like reading, but I like movies more. I'd rather get my twists and turns in the theatre than on the page. If a book explodes, as Gone Girl did and a movie is forthcoming, as it always is when a book explodes, I'll happily miss out on the bestseller hoopla and wait for the flick.
Gone Girl was a hard slice of hoopla to miss out on. I don't fancy myself a popularist (no I didn't misspell populist. I just invented a word for someone who is a pop culture junkie. Feel free to use it). I don't listen to top 40 radio, or watch a TV show just because it's hot, or buy a truck because Jeff Bridges' deep, husky voice told me to. And if a book takes off, I'm not going to read it just because everyone else is. But the more I heard about Gone Girl, the more intrigued I was. I didn't hear much about the plot, other than surface details: a woman goes missing. A campaign to find her begins and gains national traction as the mysteries that surround it are brought to light and exaggerated by the media. 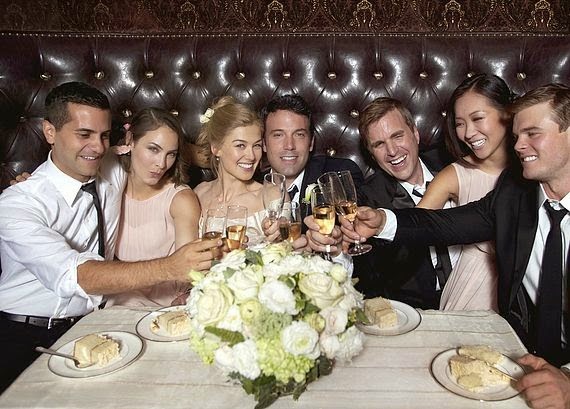 The spotlight is on the husband. Did he kill her?

There's more to it than that but there's really no more to it that can be discussed without divulging important plot points.
So what I heard instead about the book was that it was amazing. It was flawless. A page turner defined. I went through the same recommendation barrage with Breaking Bad. But I held strong with Breaking Bad. Refusing to begin the show until it was winding down on its final season. I exerted a similar willpower with Gone Girl. I don't want to know what happens. If the twists are that curvy and the plot is that smart, I want to experience it in the dark. And what if the movie is good on its own but is a disappointing adaptation? I don't want to take that chance. I'm always on the movie's side. I want to give the movie first crack at my admiration, not force it to play catch up to the book.

As it turns out, the movie was a perfect adaptation of the book (so says my wife, who isn't as finicky about the whole book before movie/movie before book thing as I am). This I'm sure is in no small way attributed to the fact that the book's author, Gillian Flynn, wrote the script for the film and worked on it very closely with the film's director, David Fincher.

If you think about it, if you look back on his career, who else would it be but David Fincher to adapt one of the darkest, most twisted, most twistiest, novels of the last few years? It's like his filmography has been building toward this. Like every film has been practise, as he waits for a talented woman to pen the ultimate marriage in peril book:
The bleak 'life's a bitch and then you die' mantra of Fight Club; the finely detailed police procedurals of Se7en and Zodiac; the pretzel twists of The Game; the lofty ambitions of ordinary folks as seen in The Social Network. Even the perversities and gutter dark beat points in The Girl With the Dragon Tattoo pop up in Gone Girl, though often in flashes rather than the lightening strikes of Tattoo.
Fincher has been doing this stuff for almost twenty years. He knows it, he's good at it, he was the best choice to bring this very edgy material to the screen.

And he wasn't alone. This movie is packed with a very strong roster of talent. Ben Affleck was the perfect choice to play the husband. And as much as I like Ben behind the camera, I haven't always understood his popularity in front of it. I've never seen a performance of his and thought he was the perfect choice, or often even the right choice. But I couldn't imagine anyone else here. 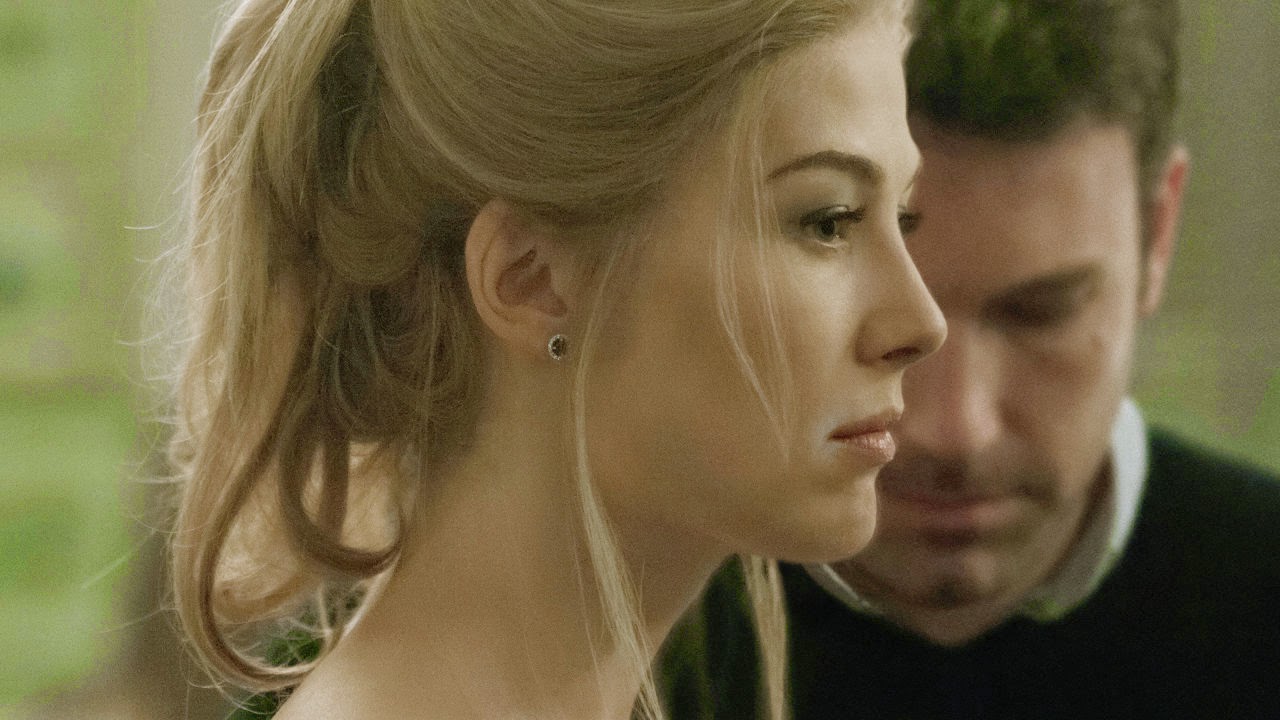 Rosamund Pike, as the woman disappeared, was an odd casting choice and in the early flashback scenes I wondered what on earth Fincher was thinking casting this person who obviously cannot act. But a funny thing happens as the movie unfolds and you realize that it isn't that she can't act, it's that she's supposed to appear that she can't. That's the character. And because it's incredibly hard to act poorly on purpose, she impresses and delights in her own unique way.
Reuniting on their third collaboration (fourth if you include a Nine Inch Nails video Fincher directed), Trent Reznor and Atticus Ross provide the dark synth dreamscape that is the soundtrack. I love Reznor and everything he touches. I truly believe he is one of the most talented musicians on earth and Nine Inch Nails are the greatest live band ever in my opinion. The backbone he provides Gone Girl with is interesting and off kilter, as much as is the film itself, but I do have one complaint. It's too loud. Maybe it was the theatre's speakers or a fault in the mix, but the music overpowers the dialogue in many of the scenes, particularly the early ones. Either Fincher tones it down later in the film or I just got used to it, but it was fairly distracting for the first half hour or so.
That's a minor complaint though in an otherwise nearly flawless film.

Gone Girl is a unique experience. It's dark and sneaky and funny and nasty and bleak and brawny and sharp and precise. It's two and a half hours long and doesn't waste a minute of it. Take it from me folks, go pee before the movie starts, even if you don't have to. Because once the curtain drops, there's no filler moment thrown in to allow the audience to relieve itself without missing out on anything.

So I guess the only question left to ask is this: will I now finally read the book? Of course not, why would I? I've already seen the movie.