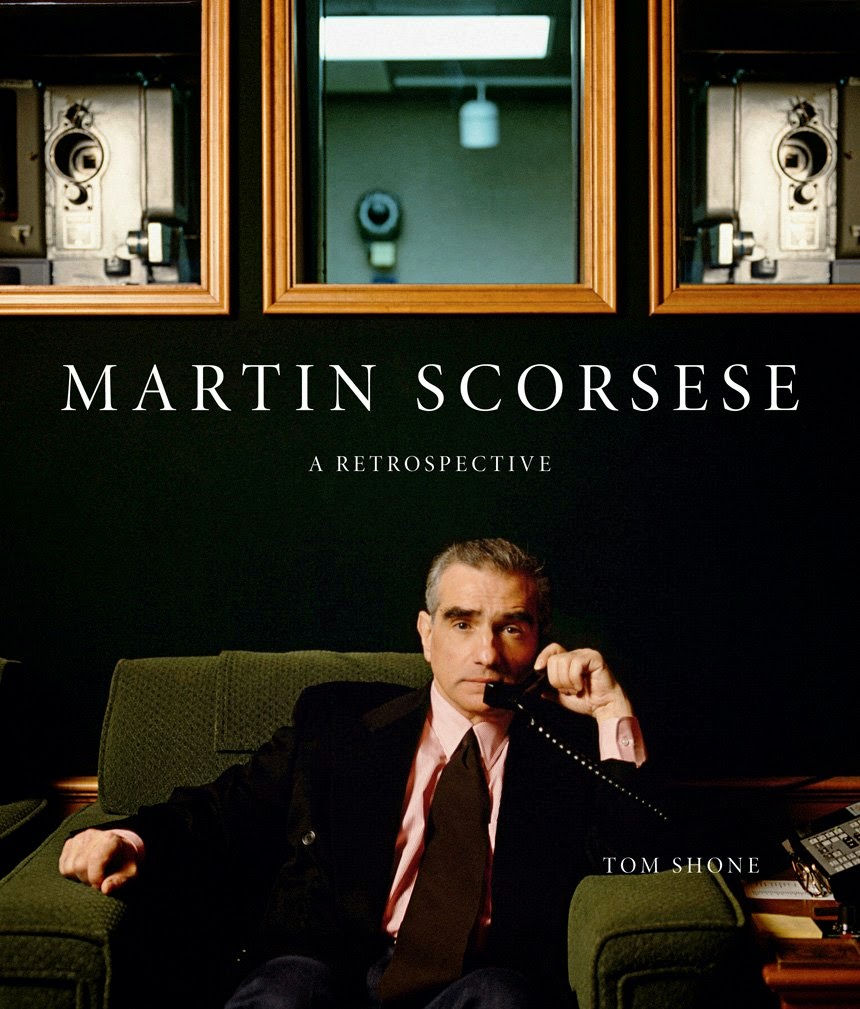 There are some popular artists for which there will never be enough books, enough things said. Artists like The Beatles, The Rolling Stones, Elvis, Shakespeare, Spielberg and Scorsese.
Scorsese has multiple retrospective books already: Conversations With Scorsese, Scorsese On Scorsese, Scorsese by Ebert, Scorsese: Virgin Film. All fantastic guides to his work and illuminating explorations of his stories and the way he tells them.

So what can Tom Shone's new book bring to the table of the maestro of blood and pasta's oeuvre that we haven't seen before, or couldn't get somewhere else?

Well, for one, pictures. The book's main selling feature is that it is packed with big, glossy, rare or unseen pictures from Scorsese's years on the cinematic beat. And they are beautiful. There are shots of Marty on set in the act of directing from every one of his films. There are also behind the scenes pics and still shots from the movies themselves.
Even if you don't read the words, buying this books for the pictures alone is worth the price of admission.

Along with the visual component, Shone has included fairly comprehensive considerations for all of Scorsese's features as well as a number of his documentaries, with quotes from Scorsese himself blown up on many pages, as well as bites taken from collaborators and peers. It's all written very well, and in a style that pulls you in and, for those of us who have seen the entire Scorsese film cannon, acts as a kind of nostalgic reminiscence of what it was like to see, or to see again, some of the films in this book.
My only qualm with the writing was a subjective one. Shone is obviously more a fan of Scorsese's earlier work and continuously faults the director for the lack of personal involvement he see's in his post Goodfellas filmography. He even goes so far as to say that the expressionistic, visual elegance in films like The Aviator and Shutter Island detract from the fact that the stories themselves are flawed or cold.
Everyone's entitled to their opinion and cinema itself is an overtly subjective art form, with the ability to be considered and experienced in many different ways by many different people from all walks of life. But it is my opinion, that while films like Taxi Driver, Raging Bull and Goodfellas may work so well because of their autobiographical elements, his later films are no more or less masterpieces than his early ones.

But this is coming from a lifelong Scorsese fan. And there isn't a single film of his that I don't like or wouldn't watch again and again. Even the so called flawed films have elements within which make them compulsively watchable. Which ultimately is something I'm sure Shone would agree with, otherwise why do the book in the first place?

So the $40 question ($45 in Canada) becomes: should I buy this book?
For the pictures alone, I say yes. Even if you own every other book ever written on the man and his movies, there are pictures here you won't have seen before. As a coffee table book, which is literally something you place on your coffee table to allow guests to pick up and thumb through, this is a fine piece of art and your friends will admire you for it. Or they can get the hell out of your house.
For the writing and critique. Really, other than Shone's own personal opinions, there is little here you won't find in more comprehensive studies. I'd say start with Richard Schickel's masterful book length interview Conversations with Scorsese and go from there.

Or, you could do the thing that makes the most sense and just watch the damn movies yourself. All of them, from the short student films which can be found on YouTube, to the documentaries and television shows Scorsese's had a hand in. And when you finish, watch them again. And again. And again. Because we won't see a better cinematic body of work in this lifetime. Or the next.