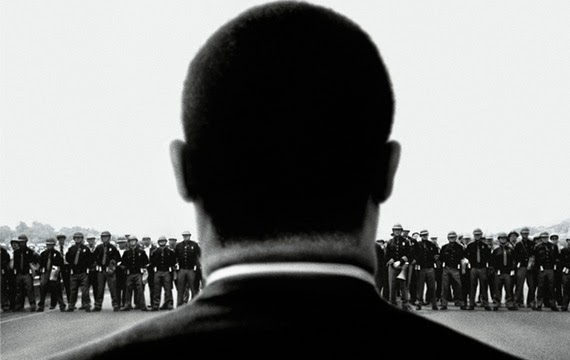 Without wanting to sound ignorant of how far we've come since, it's hard for me to imagine a so called civilized nation like America in the 1960's being so backward and full of hate that it would require a leader like Martin Luther King, Jr. to stand up and fight for equality. Really, it's hard for me to imagine in any respect hating another human being so much due to nothing but the colour of their skin. You would think that the Holocaust would've awoken people to the senseless, utter pointlessness that hate on that level accomplishes.
But while we've come a long way in some respects since the Civil Rights Movement of the 1960's, there are still examples of hatred and judgement amongst people who just don't and aren't willing to understand what they perceive as different or wrong (gay and transgender rights come to mind, though we've made some strides on that front as well).

Selma looks at a very important moment in time, not just for America, but for Canada and the rest of the world as well. It looks at a man who decided that enough was enough and at the struggles and triumphs that followed that resolution.

This movie is filled to the brim with the stuff good movies are made of: great writing, great direction and cinematography, a fascinating, important story, and acting that will blow you away. I don't know who this David Oyelowo is, though a quick search on IMDB shows he's had a busy and impressive last couple of years as a supporting actor. But he shines in his portrayal of Martin Luther King, Jr. He looks like him, he acts like him and he sounds exactly like him. Which is impressive given that Oyelowo is from the U.K.

The film follows King and his band of supporters as they appeal to president Johnson to pass a law stating that African Americans be given full and legal right to vote. Of course, African Americans already had the right to vote, but, particularly in the southern states, they more often than not are given no more right to vote than a salamander.
When the president tries to take the easy way out; i.e. 'I don't have time to pass a bill about voting right now, I'm far too busy. I'll hit you back next year on it.' King takes to the streets in peaceful protests that eventually finally awaken the world, and the president, to the kind of brutal mistreatment African Americans have been suffering in certain parts of our 'civilized world.'

These are powerful themes to tackle and Selma is a powerful film. Martin Luther King, Jr. was one of the greatest humanitarians the world has ever known. A man of self sacrifice who burned with a passion that, as all men were created equal, all men should be treated as equals. Black or white. You have to be careful when adapting such men and women to the screen. This film could be an introduction to King for younger audiences and you wouldn't want to misrepresent such an important figure.
And for my money, Selma does a fantastic job, giving us a portrait of a man who was humble and selfless, who cared deeply for fundamental human rights, but who was human and was someone you could see and touch. Not a celebrity. Not a rock star standing on a stage miles away surrounded by body guards and riding around in limos. He was a man who called people to action, but lead the charge once the masses were gathered. This was a man who's story and accomplishments deserve to be told again and again. Selma does justice to this man, and this moment in time that it's extremely important we don't forget.