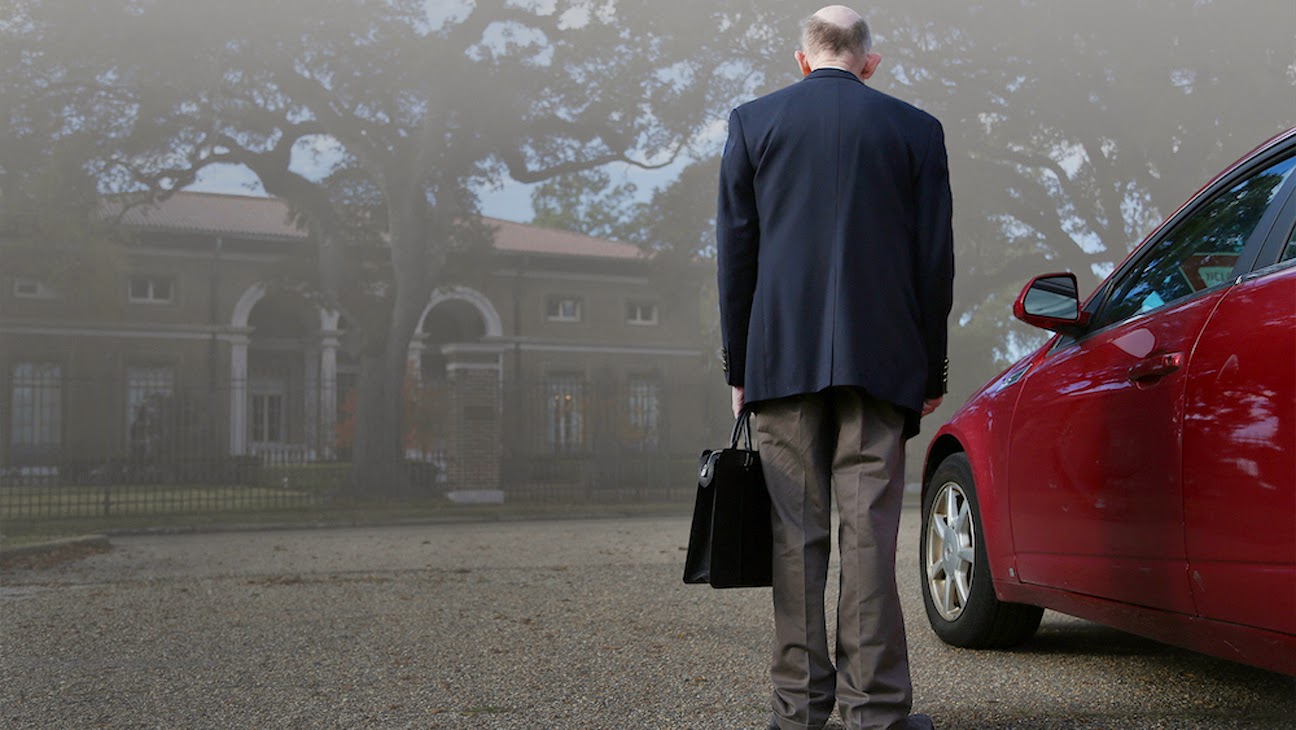 This film was released (in a limited run) before that one, but this is the Big Eyes without the financial gain (of the protagonist). A story of a master plagiarist who for many years put one, and another one, and another one, and another one, over on some of middle America's biggest and best museums and their respective curators.
Mark Landis is a genius at what he does. And like many have said in the past, with genius often comes the burden of torment to one extent or another. What is he a genius at? Well, he takes catalogues of famous paintings, photocopies them and recreates them to the smallest detail onto a copy of whichever canvas they were known to occupy. Then he contacts art museums around America, mainly middle America, he doesn't go too far north or too far south for whatever reason, and informs them that he has the original and would like to give it to them. And that's the catch. He donates them free of charge, saying they were left to him by wealthy relatives or by a recently deceased sister (which he doesn't have) or what have you. If they make it past the inspection of the curators, which they often do, up on display they go, a proud copy posing as the genuine article.
And by donating, rather than accepting money for them, Mark Landis isn't actually breaking any laws. He just happens to have this gift for art duplication and gets a rush from thinking that his work, his forgery, is being gawked at and admired by art students and connoisseurs the world over.
And a gift it is. There is seemingly no piece of art, regardless of age, style, colour or creed that he cannot duplicate with an amazing accuracy. So of course the question becomes, and is asked a number of times in the film, often point blank to his face, if he's such a good painter, why not do his own things and leave the dead's work alone. Which brings us to the underlying theme of the film, one almost as interesting, and certainly as poignant, as the forgeries themselves.

If you're an art fan, or just have a particular distaste for plagiarism, Mark Landis will probably not strike you as a very sympathetic individual. But as the film unfolds and we spend more and more time with him, such as in his cramped home. Overfilled with towers of books and papers in one room, and art supplies and frames and a bed and a sole, very outdated television in another, it becomes clear this man's top priority is not self care. That point is driven home as we accompany him on one of his many mental health check ups, where every worker asks him if he's been taking care of himself. Another case worker, one of his past ones, comes over on her free time once a week or so to check up on him in person, just because she worries about him.
Landis has had a rocky road psychologically, with nervous breakdowns, time spent in mental hospitals and diagnoses' of schizophrenia, multiple personality disorder and half a dozen other series mental illnesses handed down to him when he was just seventeen.
He lives alone, will likely die alone and the only significant relationship of his entire life seems to be the one with his beloved mother. A woman whom he adored and whose death a couple years before the film was shot seems to have spun him down a deeper hole of despair for a period from which, it becomes apparent fairly quickly, he has not fully recovered.

Does all this pardon him of his, as he calls it, mischief? From passing forgeries off as originals, often while dressing up as a priest to do so? I don't know. I'm not an art guy. I find the story interesting and amusing and couldn't care less if a cool painting was the true original or an awesome fake. If the fake looks as good as the original, who the hell cares? I mean other than Matthew Leininger, who for years obsessively made it his life's work to go after Landis the way Ness went after Capone. 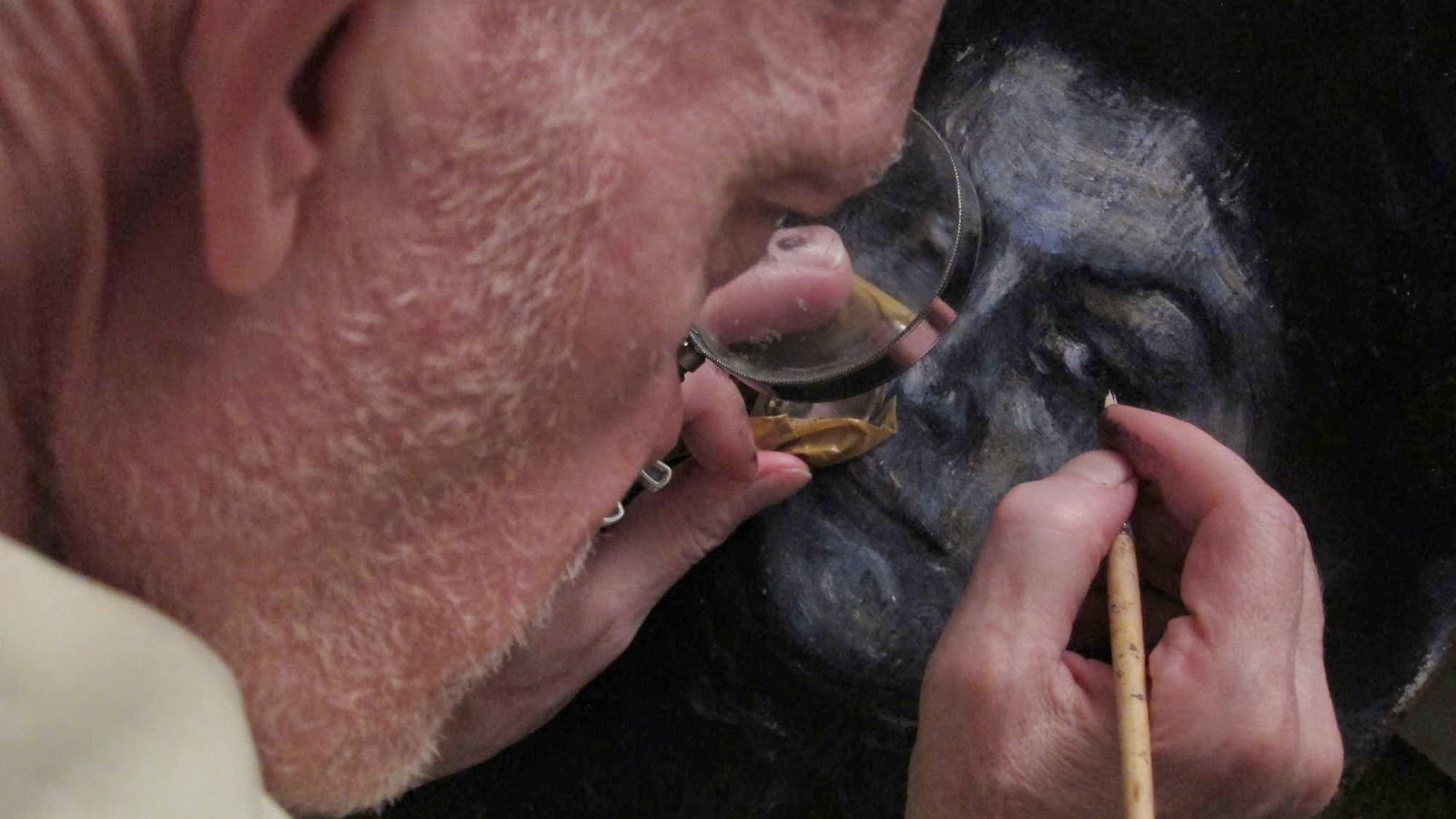 Add to that the fact that Landis is at his core just a very nice man. He's polite, kind, unassuming, humble to a fault. His insistence that he isn't actually an artist because he just copies other people's work is not only amusing it's preposterous. A lot of these guys painted their pictures once. Landis has painted some of them dozens of times with nary a stroke out of place.

I couldn't help but be reminded throughout Art and Craft of another landmark film about a psychologically disturbed individual with great artistic talent. Terry Zwigoff's Crumb, about comic book drawing genius Robert R. Crumb is the perfect way to follow up an 'artists with issues' double feature (take note film clubs) and it was hard not to be continually reminded of Crumb when the camera peered into Landis' kind, broken souled eyes.

Art and Craft is about a man who is good at copying great works of art. And about a man who is good at pretending they're the real mccoy. But for me the film is also, perhaps truly, about two things: one, it's a picture of mental illness that is both sad and compelling, and two: it's a moral quandary. How wrong is what Landis is doing? He's deceiving people, yes, but he isn't gaining anything from it beyond perhaps the thrill of anonymous fame. He calls himself a philanthropist and isn't trying to cause grief and isn't breaking any laws. He just knows that he's got a gift for this particular form of artistry and it seems to give his life some purpose. I don't see the harm in that. After all, a little mischief never hurt anyone.