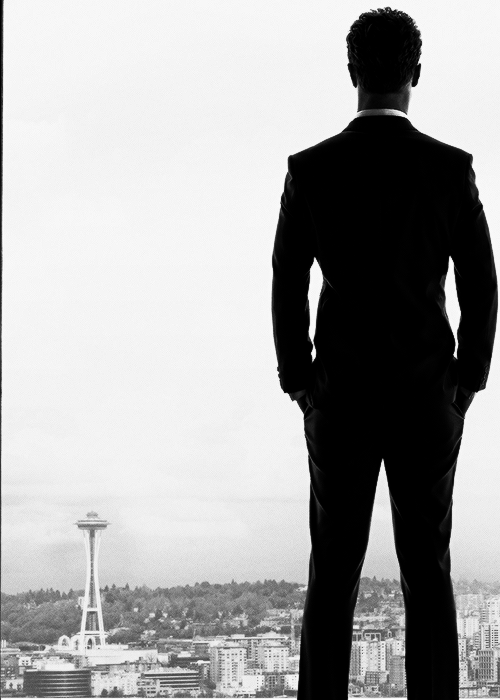 Let's be honest here. This movie never had a chance. People were excited to see this movie before a single marketing frame was released for one reason: to make fun of it.
I guess I can see why. The book it's based on became a publishing phenomenon and even as people were buying themselves (and their friend's) a copy, they were lambasting it.
I didn't read the book, but from what I understand, it's poorly written. Actually, from what I understand, that's an understatement. Still, people read it. Why? Curiosity perhaps. A way to feel kinky without feeling socially unacceptable. It obviously spoke to something rooted within the collective subconscious. Everyone has sexual quirks about them. Things that turn them on that they wouldn't want many other people to know. I'm sure there's more than a few people out there for whom pain equals pleasure.
Or it could just be that in this social network addicted day and age, where you can keep tabs on the people in your life as often and easy as looking at your phone, they didn't want to feel left out. If you're in a group of three, and two of them have read the book and you haven't, that's a shitty feeling. You want to be in on the joke. In on the conversation.

That certainly seems to be the case for the movie as well. As of this writing, Fifty Shades of Grey holds a paltry 26% rating on RottenTomatoes. People go to see it knowing it's going to be bad. They pay for the movie ticket, the overpriced concession snacks, deal with the crowds and the sticky floors and the lack of parking to see a movie they know will be bad.
Even in the showing I went to, the snickering started in the first scene and lasted until the last. Some of the that was nervous laughter. Immature people going to see a 'naughty' movie and acting like a group of teenagers who just stumbled across their first porno mag. Giggling at the sight of bums and pulsating bodies. Giggling louder the steamier the scenes got. Grow up. Too bad the theatres don't enforce a mandatory maturity rating along with the age one.

But people are going to see the movie. In droves. In many cases pretending to see it only for a laugh, but in actuality seeing it for the same reason they read the book. The subject matter. So how does the movie handle it's somewhat taboo content. Well, considering I just referred to it as 'somewhat taboo', perhaps not as bravely as it could've, or should've.
Again, I didn't read the book. If someone tells me a book sucks, I'm not going to bother with it. I don't care how many conversations that leaves me out of. But I get the gist.

And as far as this movie is concerned, it feels a little watered down. That's not to say it doesn't earn it's R rating (18A in Canada), but it feels like when the steamy stuff just starts to get good and steamy, they abruptly cut to the next scene. This is probably to maintain the rating, I've no doubt when the movie hits home release it will do so with an 'uncut' version you 'couldn't see in theatres.' But still. People are here to see some action.
There also aren't a whole lot of steamy scenes and the non steamy scenes aren't interesting enough to justify that.

A lot has been made of the lack of chemistry between the two, mostly unknown, lead actors in the film. I don't know if it's chemistry they lack more so than the ability to act. I know that Jaimie Dornan, who plays Christian Grey, wasn't in the least bit convincing as a young billionaire control freak with a dark past and strange desires. Dakota Johnson, as Anastasia, isn't bad though. She does well with the initially annoying but appropriate mix of innocent wide eyed wonder, coupled with an addiction to this new and exciting man and the passion he sparks in her.
Is that to say the movie wouldn't have been hotter with two established sexy young stars in the role? No. It would've. Give me Ryan Gosling and Blake Lively any damn day. But it is what it is (man I love that saying, don't you?)

My biggest problem with this film isn't the acting, or the sexual cowardice, it's the ending. All in all, I felt that the film wasn't as bad as people were making it out to be. It is an interesting story. Aside from a few unforgivably cheesy lines of dialogue I'm sure were transplanted from the book, it wasn't terribly written. And it has its moments of genuine humour, danger and passion. But it didn't go anywhere. It ultimately feels unfinished. It felt like it was building up to something for two hours and then the filmmakers just forgot to slap an ending on it. It's a Sopranos style ending that makes you scratch your head when the end credits pop up. Unfortunately, this sort of ending makes everything that came before it more or less pointless. It would've made more sense if this movie was called Fifty Shades of Grey, Part 1. And while I have no doubt there will be a sequel, the feeling walking out of the theatre is not one of passions ignited, or kinky itches scratched, or even the aftertaste of delicious chemical coated popcorn. It's one of frustration. Of annoyance. Of a hard spanking. The bad kind. Not the good kind.