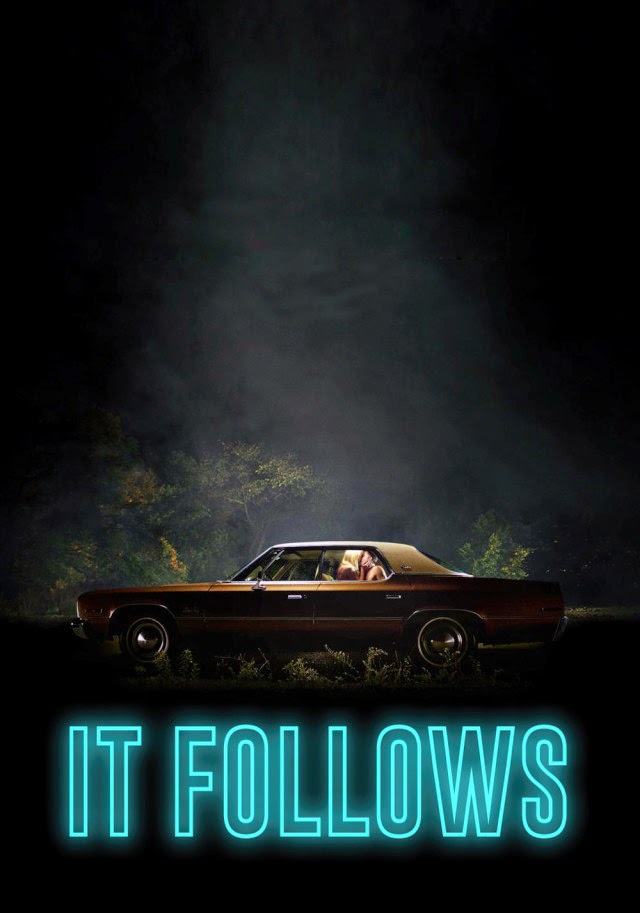 It Follows follows Jay, an attractive girl on the verge of her twenty’s who sleeps with her boyfriend and contracts a demon as a result (your parents were right about premarital sex kids!)
The demon takes the form of people, some of whom she knows or has known, and stalks her relentlessly, intent on killing her for her naughtiness.

Now a synopsis such as this can curve one of two ways. Either this is a tongue in cheek horror-com, sardonically wagging its finger at the ‘dangers’ of flippant teen sex.  Equal parts Scream and Cabin Fever perhaps. Or it’s a horror that takes itself seriously and truly wants to frighten, but fails, as a result of its silly premise.

Amazingly however, It Follows subverts both of these possible routes by being something else entirely. It’s a real horror film, with real horror. And while it’s message of ‘the only way to avoid the demon is to abstain from intercourse’ is within the narrative perineum arch of the film itself, it isn’t concerned with preaching or educating anyone on anything outside of how to make a really good chiller.

David Robert Mitchell is a filmmaker you’ve never heard of but I suspect will be heard a lot more of in the years to come. He makes films in and about Detroit and while It Follows is his first wide release, it isn’t his first turn at the helm of the great ship celluloid.
You can tell watching this film that Mitchell had a hell of a ball making it. It’s technically interesting without being needlessly flashy. It’s visually inventive without being ostentatious, which it had the ability to be if it so chose.
If this film were made by Paul Thomas Anderson, the technical prowess that resides in abundance within his frame would have been distracting and off putting. You can tell that Mitchell, while commanding enough knowhow to comfortably move around within his frame, is still feeling his way around it as well, which adds an innocence to the picture that fits this particular tale well.

Another big part of this film’s effectiveness lies in its musical makeup. Composer Rich Vreeland, according to IMDb, is another relative newbie in the film scene, but his angry strings and neo-nostalgic bursts of synth crunch, grind through the picture, punctuating the dread that a film about demons stalking virgin-less teens asks for, no, demands. If a nude, hell spawn representation of a loved one walking toward you with a murderous glint in their eye isn’t enough to creep a crawly up your arm, Vreeland is sure to remind you every time.

Without doubt It Follows is a fiercely original film. But it also owes a great debt to the films it exists, at least in part, as a tribute to. Namely, Halloween. In fact, the film comes close to being a remake of that 1978 classic on a number of occasions. The music, the undead demon stalk, the naughty, frisky teens, the sheer relentlessness of the chase. And the look.

The characters don’t mention Detroit until the end of the film, but what other American city could it be? The neighbourhoods look like drab, forgotten relics of a more hopeful, prosperous time. Others look positively post apocalyptic. Whole city blocks abandoned and left to rot within their own skeletal structures. A city that failed its residents, and whose residents, as a result, left behind in search of greener metropolitan pastures.
The exact year, or indeed, decade, of It Follows is also a bit of an enigma. The characters are dressed in modern clothing, but their houses are decorated in the faded earth tones of the 70’s and the back projected televisions of the 80’s. Some the cars are 2000-somethings, but there isn’t a cell phone in sight, even when it would make most sense for the character to use one. And the aforementioned hollowed out city of Detroit itself is a shell representative of its modern bleak landscape, rather than the more fruitful years of twenty and thirty years ago.


But while this dichotomy of time and place fits the story well, and harkens it to its genre defining forebears, it doesn’t really matter when or where It Follows stalks its prey. What matters is that this film is cool, creepy, smart, brutal, sick, slick and exciting in all the ways horror films should be. It’s got good acting, characters you’ll care about, and ends just the way I was hoping it would.

It Follows joins the likes of House of the Devil, The Innkeepers, The Conjuring and The Babadook in taking its cues from the slashers and the haunters of the second golden age of the grotesque in the 70’s and 80’s, rather than the over the top exploitation and swish boom cheese we usually see hit horror screens these days. It almost makes you wish one of these young filmmaking wunderkinds would resurrect Freddy Fingernails for one last slash of the throat…