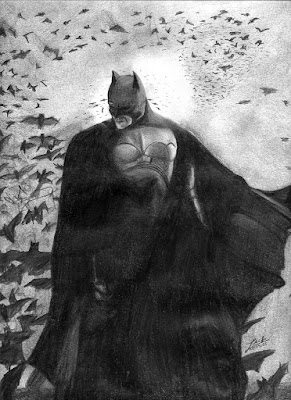 People always say this, but it's hard to believe Batman Begins is ten years old already. I feel like just yesterday I was holding its little celluloid feet in my hands, in awe at the miracle of cinematic birth. Wondering how such a complete, fully realized baby Batman movie come from such a tiny little egg of inspiration from Christopher Nolan's intellectual loins?
But it is ten. And even as its faults are more apparent than when it was an infant. And even as it's talking back and breaking my stuff, I still have a soft spot for the little bastard.

It's hard to believe it now, what with his cinematic carte blanche and apple basket full of truly original and often mind boggling mega movies, but before the Dark Knight trilogy, Nolan was just a sharp minded film dude with a couple of cool, smaller scale flicks under his belt. Upon hearing that Warner Bros., who he had just worked with on Insomnia, were looking to reboot the Bat, Nolan approached them with his vision: a more realistic, down to the earth origin story. One that focused on corruption and faded ideals, rather than sewer dwelling bird men, or cartoonish jokesters. A darker Batman movie. Far darker, literally and figuratively, than even Tim Burton's oil black Batman from 1989 and his even blacker Batman Returns sequel. Most importantly, he wanted to create a film that would wash the soured taste of the ludicrous Joel Schumacher films from the mouths of Bat fans the world over (is there a worse movie in the history of crap film than Batman & Robin?)
I'm sure the studio was initially sceptical, but they handed over the reins and set Nolan loose on what would become one of the biggest (in terms of dollars spent, dollars earned, ideas and acclaim) movie trilogy's of all time.

The biggest hurdle that Batman Begins must face today is the power and quality of its successors. I would say it's more or less unanimous that The Dark Knight is considered the crowning jewel of the trilogy. And while it has its detractors, I think Rises is also a better movie. So is it possible to consider Begins on its own merit? Can you watch this film without wishing for the Joker's twisted visage? Or for the pure enormity of Rises and all it tries to accomplish in its two and a half hours? No, you can't. If you've just crawled out from under a rock and have never seen the other two, than Begins will be a better movie to you than it will to me, or to the many of us who have seen the series get better and better.

Which isn't to say the other movies were perfect. The Dark Knight is still a bloated affair. Overfilled with two faced bad guys and political plot lines that tangle and detract from the more interesting Joker narrative. And Rises' biggest fault may lie in its central antagonist. I love Tom Hardy and I love his performance in the film, but his voice is too damned loud and his dialogue is too damned silly. Also, if the ending of that film in regards to Batman's fate is to be taken literally, it is a sad, gutless cop out on Nolan's part to appease the studio and those in the audience who like their movies by the numbers. The fact that there's just enough doubt and a possible smoke and mirrors show going on, redeems this though. Even if the smoke and mirrors were optimistically placed there by those of us who refuse to accept rainbow smiles at the end of a dark and troubling three film narrative.

I do, however, remember that I didn't enjoy Batman Begins as much as its consensus of reviews claimed I should. For one thing, it takes too long to get to the man of the hour. The caped crusader doesn't show his cowl for a full hour. That's almost half the film devoted to his backstory, his training and his finding his self. All of which are important precursors and indeed I would fault the film omitting any of them from its narrative. But the amount of time spent on them could easily have been cut by a good twenty minutes.
Once Batman does finally show up, however, the movie kicks into high gear and stays there for its remainder. Actually, if you know the backstory and are more interested in the bat kicking ass than where he came from, you can start watching the film from that first bat scene on the docks and have a great, fast paced hour and twenty minute Batman movie in front of you.
Begins also suffers from what all the movies in the trilogy suffer from, which is characters in excess. Nolan and his writing partners are always trying to shove too many people into the story. I get that the Batman universe is a large one, filled with interesting characters and villains. But a more minimalistic approach to the roster would've served all three films much better than a dash of Two-Face here, a pinch of Victor Zsasz there. If for no other reason than that there's not enough time to give these characters a proper story arc and many of them feel underwritten. 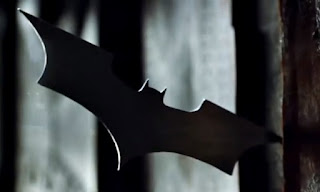 Begins is still a damn good movie though and its pluses definitely outweigh its negatives. If you are a sucker for a detailed account of Bruce Wayne's pains and gains before Bat life, you'll love the first hour. I love the scenes between Bruce and his father and the special bond they shared. It helps give that punch in the gut when his parents are gunned down in front of him that extra bit of oomph. I also love the Applied Sciences wing of Wayne Enterprises and the explanation (finally) of where the hell Batman gets all those wonderful toys.
With the exception of Katie Holmes, who I wasn't sad to see replaced for the sequels, the acting in the Dark Knight trilogy is roundly brilliant. I still have a soft spot in my bat heart for Michael Keaton as Batman, but Christian Bale brings an intensity and commitment to the role it needed for this trilogy, silly deep bat voice or no.
And that goes for Cillian Murphy as well. His performance, and his character, are overshadowed by the awe inspiring turn from Health Ledger as the joker and the larger than life intimidation of Tom Hardy's Bane. But he's fantastic as the mad doctor who likes to terrorize his patients with a sack over his head as Scarecrow.
And visually, this movie is amazing. The Gotham of Begins is a more cartoonish one than in the sequels. And while some of the architecture is neat and fun to look at, I prefer the more real world feel of Knight and Rises. The Narrows, however, a low income slum near Arkham Asylum, is an inspired piece of set design and serves well the film's most visually inspired set pieces.

The best thing that can be said of Batman Begins ten years later, is that it doesn't feel dated. This film could come out today and no one would bat an eye (bat puns also never get old). I can say with confidence that that will be the case on its twentieth anniversary as well. Nolan is a filmmaker who shoots organically (without CGI) whenever humanly possible and this protects the aesthetic of his films from premature ageing. 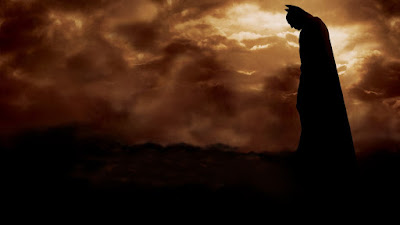 I can't say that Batman Begins is the best comic book origin story ever. Because it isn't. And I must retain that it is the least of the Dark Knight films. Because it is. But it is a damn good movie. Even if, because there were two better behaved children that came after it, it will never be as good as it was before it had siblings.