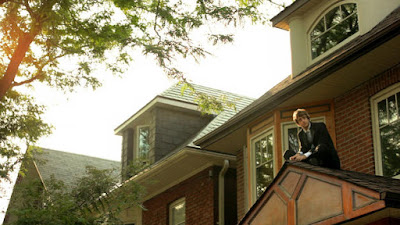 Ben's At Home is about a Toronto 30-something who reviews movies and video games, who doesn't like going out and is not a huge socializer. So it's basically about me.
One day he decides he's not going to go out anymore and pledges to himself to stay in, indefinitely. This being 2015, it's actually not that hard. He can order his groceries online and have them delivered. He can find dates online and invite them over and he can work from home. Initially, being a hermit in today's day and age doesn't seem like as much of a commitment as it would've in previous decades. And even when bed bugs and a subsequent evacuation force him to find other accommodations for a night, his answer is to set up a tent and 'rough it' in his backyard.

Of course, this domestic bliss doesn't last forever and complications do eventually arise.
He misses some important events, like a bachelor party for one of his best friends. He starts dating a nice girl but scares her off, in part because of his lifestyle and in part because he's still stinging over a bad breakup. And he eventually is forced to decide whether it's better to stay in his house for the rest of his life or have relationships with actual human beings.

The film stars Dan Abramovici, who also cowrote it. Dan's written and acted in a number of interesting Canadian independent films. This is his first full length. It's also director Mars Horodyski's first full length feature. They're not newcomers and have made their bones in a number of short features, but they both do well with Ben's, as evidenced in the number of awards its won in the past year or so.

The film is an easy watch and while it might start slow, it pulls you in and you'll eventually find you won't be able to turn away. It's definitely got a bit of hipster vibe, though some people take that word as an insult and that's not my intention. It's hip and quirky like all those indie's Michael Cera likes to make. Kind of Juno-ish even.

Abramovici is great as Ben. He's got an easy charm about him and the right amount of wandering and wondering that a thirty something looking to find his way in the world should have.
Jessica Embro, as his love interest, is great as well. She's beautiful and charming and a pleasure to watch.

The idea behind the film is one that could easily have lost its steam if it was mishandled or paced improperly, but the well written script keeps the pace lively and at an hour and ten minutes it's about the perfect length.

I don't know where you'll find this film outside of Toronto or when (or if) it will eventually pop up on iTunes, but if you come across it, it's worth a look. It may not be as deep or assured as the film's of Canada's current cinematic golden boy Xavier Dolan, but I see these filmmakers going far and worth keeping an eye on.