There are three non negotiable inclusions which must grace every Jurassic film, whether it's the fourth instalment or the fourteenth:

2) That bloated, yet nostalgia triggering John Williams fanfare from the first film. Preferably swelling at times of awe or sweetness.

3) People being eaten by said dinosaurs. Preferably in new and inventive ways. And testing the very boundaries of the film's PG-13 rating.

Those three things are important. Every instalment has had them, and Jurassic World is no different. In fact, Jurassic World is so committed to its Jurassic Park hat tipping, that it is essentially a remake of the first film, just updated to the technological advances of 2015's arts and sciences. Let's look at as many of the similarities between the first and fourth films as we can without tripping the spoiler wire:

1) Two kids come to the park to hang out with an uber rich relative and get stranded out amongst the prehistoric pets when an unforeseen malfunction occurs.

2) A brave adult (adults, in this case) go out into the park to rescue them.

3) The kids use their specific sets of skills to survive the park on their own. One of the kids, of course, is a dino freak. Knowing all about dinosaurs and they way they live.

4) Meanwhile, a mad scientist type person is using the havoc to his own personal gain, putting more lives at risk as a result.

5) The Samuel L. Jackson character (this time he's white and drinks soda instead of smoking cigarettes), spouts one liners and sits behind his computer attempting to save the day from the technical side.

6) There are raptors. They are smart.

8) There is also an important scene at one point in the movie that is almost an exact rip off of the same predicament in the first film. Which, in this case, is not seen so much as a tribute, but just plain lazy.

9) People outrun dinosaurs they have no business being able to outrun.

This film also suffers from the same trappings as the first one in regards to cheesy dialogue, over the top close calls where dino teeth just miss chomping down on someone by a camel hair (this happens many times in Jurassic World) and characters who are geniuses in every other way being cursed with a complete lack of common sense.

All that being said, this is not a bad movie. In fact, it's easily the best chapter in the series since the first. Because although it borrows shamelessly from the first film, it updates itself as it does. The park rides are far cooler and more advanced. We're introduced to new dinos, both the cool harmless ones and the ferocious sociopaths. And people are chomped, chewed, ripped and tossed around in surprisingly gruesome ways (many people die in this movie. Many more than I would've thought).

Chris Pratt is Captain Saves-The-Day this time around and he's alright. He's got the rugged sex appeal required. He's fantastic at delivering the more comedic lines. He's not as well versed in straight drama though and the more serious his character gets, the more his acting falters.
Bryce Dallas Howard is the damsel in distress with balls and plays her well. She doesn't have the acting chops of a Jessica Chastain, but she's a good substitute when a studio doesn't want to shell out the cash for the real thing.
And there are the kids who are pretty good and the supporting cast who's pretty good and blah, blah, blah, who cares about the people, we're freaking here to see some DINOSAURS.

The great thing about this movie is that it's a shameless popcorn flick and it knows it is and is more concerned with spectacle than specifics. And let's be honest, most of us are too. The film will get crapped on by people who only enjoy foreign movies about transcendence or coming of age in depression era Berlin. But what the hell are those people watching this movie for anyway? They know they'll hate it. Some people just like to hear themselves bitch, I guess.

For the rest of us, is it not enough to feel fulfilled when we shake our heads at the silly improbability of a scene, while still gripping our armrests from its thrill?
Is it not enough to say 'of course he's going to get eaten, he's fat and can't run' while revelling in our soothsaying when our proclamation rings true?
And is it not enough to wonder just how the hell a human being can outrun a velociraptor while thanking God they can when they get away?

I say it is. Millions of people heading to multiplex this weekend will say it is. Those of you who say it isn't? You can stay in depression era Berlin. Jurassic World wasn't made for you. 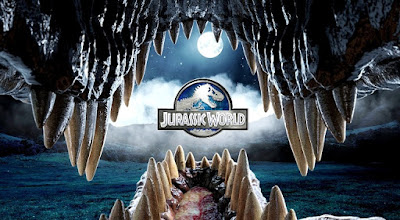