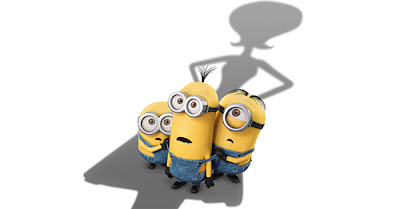 Kevin, Stuart and Bob. Minions. Born and bred to hench for only the foulest criminal masterminds. Made famous in loyal servitude to Groot, the evil genius and protagonist of Despicable Me's 1 and 2. Now, in that flash of spin off popularity occasionally afforded to third tier characters in animated films, they have broken out to star in their own full length feature. The question is, do they work without their master? And the answer is...at the end of this review.

It's easy to see why the Minions have broken out. The little pill shaped rascals are cute, funny and ambitiously clueless. They also talk funny (a gibberish pie with slices of French, Spanish, and whatever else gets thrown into the blender), and they're totally committed to their life's work in serving the baddest bad guy around.
But do they deserve 90 minutes of our attention? After all, when most supporting characters break out of their films to follow their own career paths (see the Penguins of Madagascar, the Lemurs of Madagascar, Timon and Pumba of Lion King, Donkey of Shrek, etc., etc.) it's usually in the form of short film DVD extras or crappish straight to video movies. Theatrical releases for spin off characters is a little less common. But I like how the filmmakers approached things with this particular film.

Minions is an origin story. A prequel that takes place, well, mostly takes place 42 years B.G. (before Groot). But it begins by stretching all the way back to the true beginnings of these adorable little freaks.
Once we reach 42 B.G. in the story, the minions, in search of a new master for their depressed population, send Kevin, Stuart and Bob to the Big Apple, where they find themselves at 'Villain Con' and in the service of the world's greatest villain Scarlet Overkill. But because they're Minions (hard working, well intentioned little screw ups), it takes little time for the three to lose favour with Overkill and they find themselves in the crosshairs of her wrath.

I liked this movie. It's witty enough, funny enough, entertaining enough to keep even the most wary guiding parent from being tempted into spending the film's runtime with their face inside their shirt checking emails and playing Space Age.
Was it as good as the Despicable Me flicks? Maybe not, but I would say it's as good as them. The Minions have a charm about them that many will find irresistible, even when the jokes aren't working, and they often aren't. And as silly and unoriginal as the plot becomes, there's enough colour and extravagant action to make you halfway forget it.
I don't know that the film was appropriately engaging at 90 minutes though. I think there's a great, hilarious 30 minute film here. Maybe even a solid 45. But at 90, there's seems to be a lot of filler, and you can tell when the filler is up on the screen.

By the end of the movie, things have gone so far over the top that you wonder if the writer's perhaps got bored with the story and just stopped trying. But don't get me wrong, Minions is a funny, fun little movie that's worth seeing if you want something to do with your kids in a cool, dark place some afternoon and have already seen Inside Out. Let me reiterate that, if you haven't seen Inside Out and you want to hit the multiplex with your brood, then Inside Out's what you want to see. Otherwise, Minions is a safe runner up.